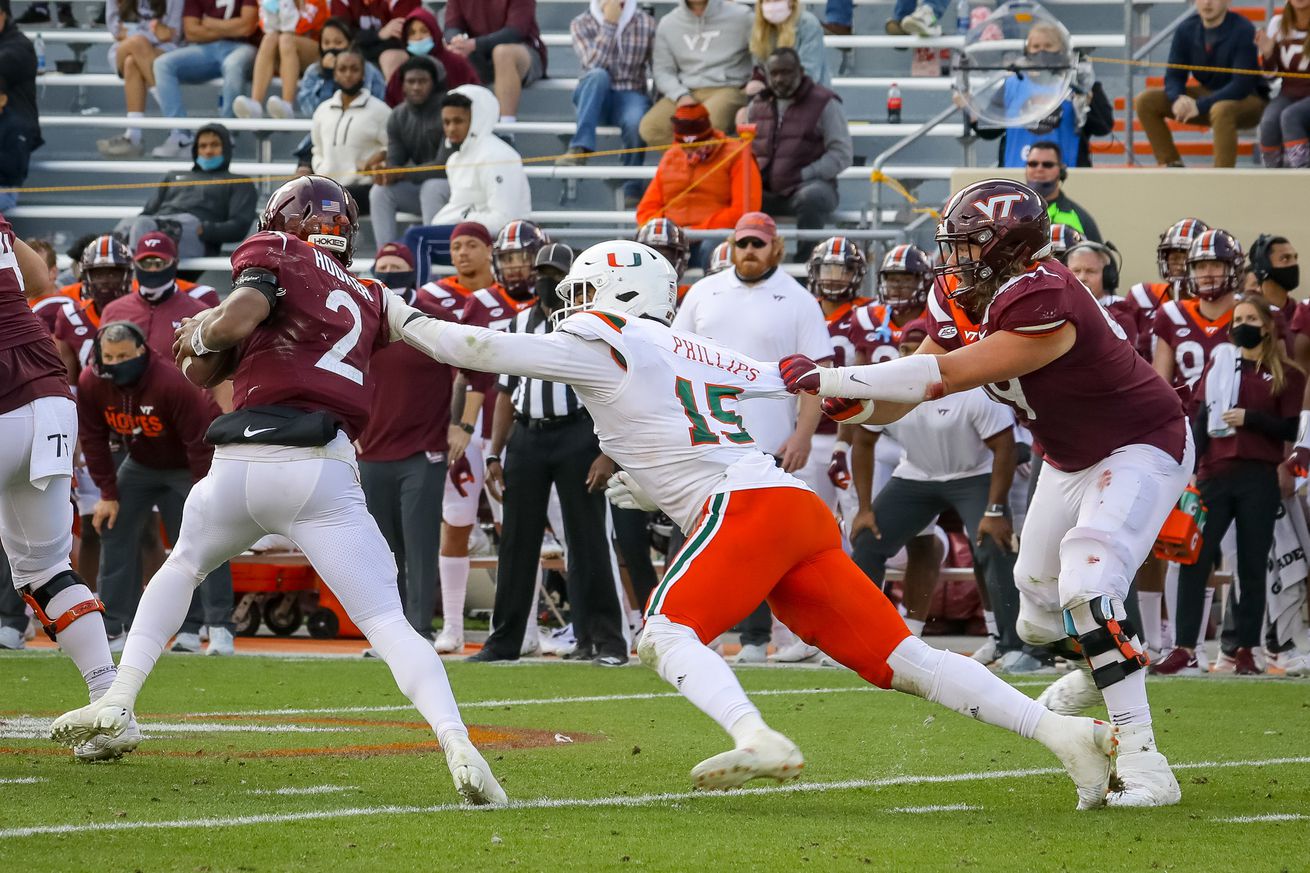 The Miami Hurricanes improved to 7-1 this week. The Canes, and several other teams in the polls, continued to make their push for a postseason claim.

Outside of the SMU Mustangs loss to Tulsa, there were no upsets in the polls this week. The drama-free weekend in the AP Top 25 and Coaches Poll was also a product of six games, including top 25 teams, being postponed (eleven total games), making week 11 the hardest-hit week since all the Power Five schools started play. There have been sixty-three postponements in total for those counting at home. Which again, makes it hard for teams, especially in the late-starting PAC-12, to surge up any polls in time for the playoffs.

But on the field, there were several stellar performances this weekend from teams looking to cement their playoff or bowl game statuses in the weeks ahead. Ian Book’s 368 yards of total offense and 4 TDs illustrated that Notre Dame remained mentally locked-in after defeating the Clemson Tigers, Michael Penix Jr.’s and his 320 yards and 2 TDs kept the Hoosiers hot and 4-0 in conference play, and Kyle Trask’s 6 TD performance truly made up ground for him in he Heisman race.

Let’s see how the week 11 action influenced both the Coaches and AP Top 25.

Notre Dame’s most impressive quarter yesterday came in the second. They they scored 21 points. They ended up taking a 31-16 lead into halftime, which made all of the difference in their 45-31 defeat of the Boston College Eagles. After their bye week, the Irish will close he season against the North Carolina Tar Heels, Syracuse Orange, and Wake Forest Demon Deacons. If they continue their winning ways and top-two, they’ll be in-line to take on Clemson in the ACC championship game.

Also in the ACC, like the Canes, UNC mounted a second-half comeback as well. The Tar Heels were down 21 to Wake Forest with 21 minutes left in the third quarter, Sam Howell constructed scoring drives of 75, 74, 89 and 81 yards to take the 59-53 lead. The sophomore QB threw for 550 yards and 6 TDs. He also helped his team sneak back into the top-25 in the Coaches Poll.

Speaking of great quarterback play, the Gators’ senior quarterback Kyle Trask had himself a day. His 356 yard performance in the Gators’ 63-35 win against the Arkansas Razorbacks was impressive. Trask now 28 touchdowns (the most in the country) and has at least 4 TD passes in every game this year. Like the Irish, the Gators are making their way to their own conference championship showdown in the SEC and are cemented in the top 6.

Indiana continued their winning ways in the Big Ten. Their defense clamped down on Michigan State, holding them to 191 yards of total offense. They also forced four turnovers. Their surging play was good enough to keep them locked in in the top ten in the polls

Also in the Big Ten, the Northwestern Wildcats join Indiana as the only 4-0 teams in the Big Ten. They beat the Purdue Boilermakers 27-20. Next week’s game against the top-15 ranked Wisconsin, may decide the West division.

Teams like the SMU Mustangs and Army Black Knights dropped completely out of the polls SMU surrendered their halftime lead and eventually lost to Tulsa 28-24. The Mustangs’ odds of reaching the American championship game and competing for a New Year’s Six bowl is pretty much spiraling. After their win, the Golden Hurricane are the favorite to meet top-ten Cincinnati for the AAC title.

Now at 7-1, the Canes have already surpassed last season’s win total. Down 24-13 late in the third quarter, D’Eriq King led the Canes on a 13-play, 75-yard drive which ended with a 6-yard touchdown run by Cam’Ron Harris.

King then mounted a 10-play, 82-yard drive that resulted in a game-winning 36-yard touchdown to Mark Pope. This victory also came one week after King led Miami in a 10-point, fourth-quarter comeback over N.C. State 44-41. Apparently, the comeback win wasn’t good enough to maintain their top ten status in the AP Top 25. However, they remained in the top 10 of the Coaches Poll.

Miami will be taking in the Georgia Tech Yellow Jackets this week under the Saturday night lights.