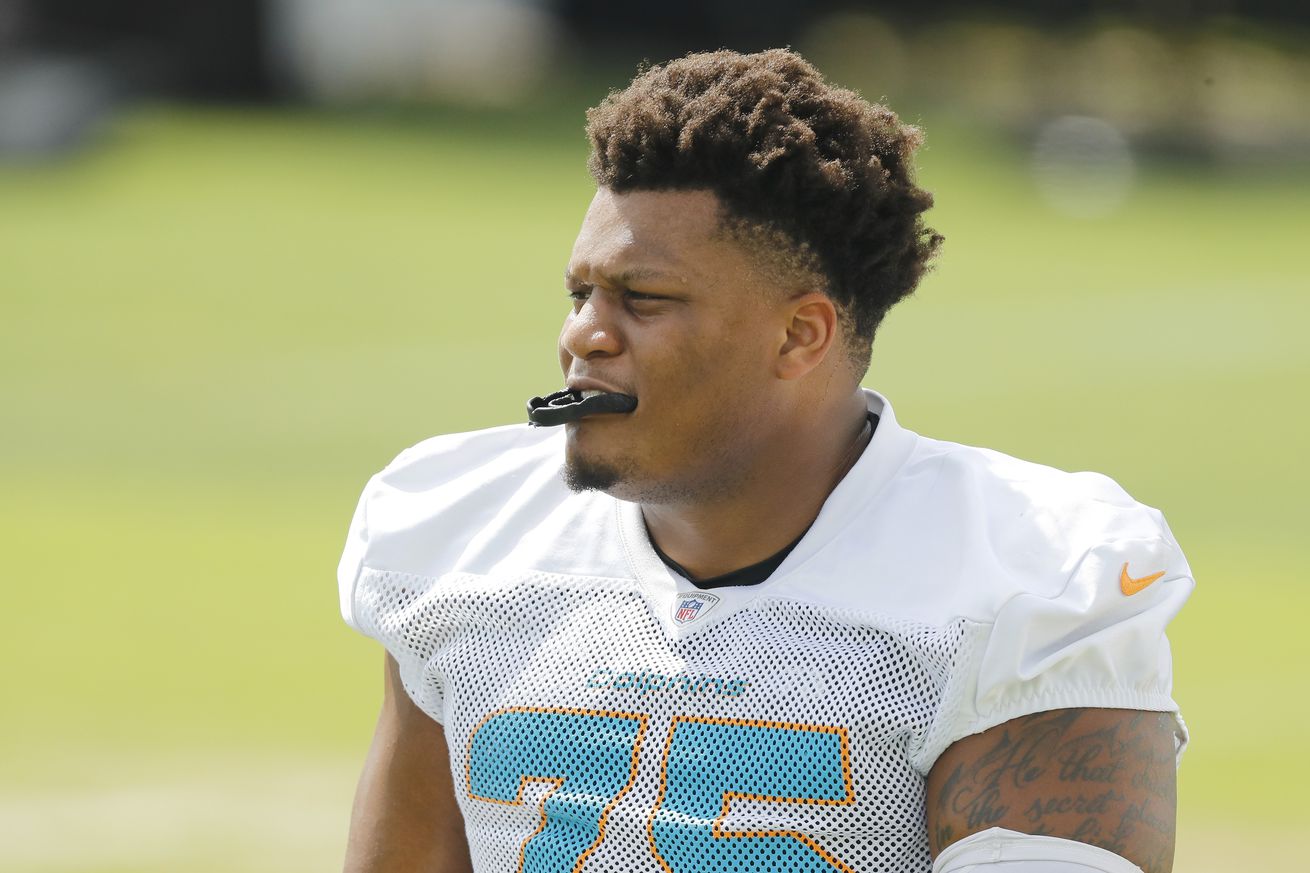 Initially Considered an NFL Draft Bust as a 2015 Top Ten Pick, Ereck Flowers Continues to Blossom in Miami. ProCane RBs Also Have a Nose For the End Zone In Last Sunday’s Action

Week Nine ProCane of the Week: LG/Ereck Flowers – After Flowers was drafted 9th overall in 2015, there were obviously high expectations for the ProCane. However, he did not prove to be a fit at the NY Giants LT position and was constantly exposed in the first three seasons under his rookie contract. This poor performance ultimately led to his departure. In 2018, he could not maintain any semblance of consistency as he only started 9 of 16 games on two teams – the Giants and Jaguars.

In 2019, however, it appears Flowers’ career finally started to blossom as he started all 16 games with Washington at Guard, where he appeared to be a more natural fit at the NFL level. After the promising season, he was picked up by the local NFL team, the Miami Dolphins, in free agency. It is no secret the Dolphins needed work on the OL as they were one of worst NFL offensive fronts in 2019. Flowers was just one piece that could assist, but he earned a 3-year/$30million deal to overhaul the front trench.

Many wondered if Flowers was worth that contract after just one good season. This past Sunday may have helped answer that question. Flowers was the highest graded LG in a week 9 victory over Arizona, as Pro Football Focus gave him an 88.5 overall grade, which is the best grade in his career. This included an 88.2 pass-blocking grade and a 83.9 run-blocking grade. Based on this strong performance, the pundits should take note that Flowers’ career – and the Dolphins OL – appears to be headed in the right direction.

The 88.5 overall grade was the best of Flowers’ 6-year career in the league #MIAvsAZ #FinsUp pic.twitter.com/y5qbgKC7oV

Sticking with the OL, Jon Feliciano (Bills) and Brandon Linder (Jaguars) played 100% of the snaps last week as they continue to be stalwarts on their respective lines.

It has been a slow start for Duke Johnson after he hit the sidelines due to injury after the first half of the opening Thursday night game against the Chiefs. The Texans two-headed D. Johnson backfield of Duke and David looked prime for a decent season but Duke had been nonexistent until this past week as he eased in from injury. This past week, he got his feet wet in the backfield rushing 16 times for 41 yards and 1 TD. On the season, Duke had only rushed 18 times total before Sunday. He did lose one fumble this past week, but played true to his pass-catching back form as he hauled in 4 receptions for 32 yards.

Last, but certainly not least for the ProCane RBs, Jets Frank Gore, strung together 46 yards on 12 carries. Another ageless wonder, Bears TE Jimmy Graham, also had a productive weekend as he had 6 receptions for 55 yards and a score.

On the defensive side of the ball, Colts DE, Al-Quadin Muhamad, had a strong performance in week 9 as he had 4 Tackles, 2 TFL, and 1 Sack. In week 10, however, he did not hit the stat sheet and was disqualified in the fourth quarter win for what looked like a thrown punch. Lastly for week 9, Chargers S, Rayshawn Jenkins, and LB, Denzel Perryman, had 9 combined tackles.
Week Nine Projected ProCane of the Week: RB/Duke Johnson – As noted above, Duke Johnson appears to be hitting his stride. The other portion of the D. Johnson Houston backfield, David, will be out of action due to a concussion. Thus, Duke’s role should continue to increase as he will be the lead back. Look for a big game not only in helping Houston as the every down back, but also in all fantasy leagues where he may be available.

Gus Edwards redeems himself for his fumble and plunges into the end zone from one yard out. 14-10 Ravens a little more than midway through the third quarter pic.twitter.com/Vc50Q9mTIt

Most Targets in Goal to Go situations in 2020 (among TEs):

That’s more than double his 2019 total of such targets (3). He’s caught 4 of those 8 for 4 TDs#OnePride pic.twitter.com/oFvSgF0Dlj