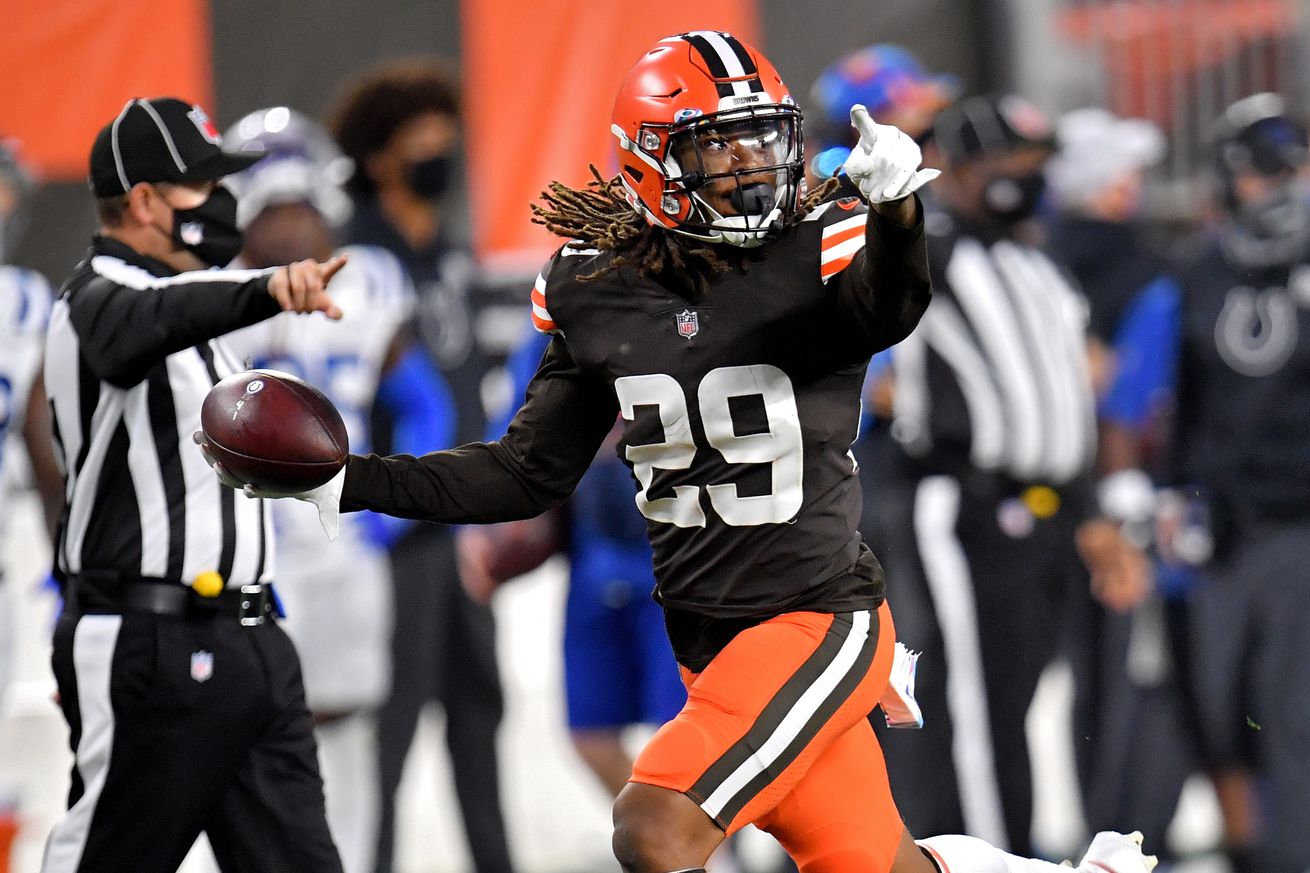 In Week Five of the NFL Season, the re-shuffling of schedules was on full display. For only the third time since 1946, we experienced Tuesday Night Football. And with that, the NFL had to remove the game slated for this past Thursday night. However, we now get two Monday night games this week. As much of 2020 has been, it continues to be a season unlike any other.

As far as this week’s play, it was ProCanes on defense that led the way, especially at the Safety position. Despite the defensive domination, ProCanes currently have a six-game NFL TD streak, as they look to break their own record of 149 straight weeks with a TD.

Week Five ProCane of the Week: S/Sheldrick Redwine – Prior to Sunday, Redwine had not seen the field for any defensive snaps. However, he made the most of his opportunity when safety, Ronnie Harrison Jr., went down to injury. On his first snap on defense, he made a crucial interception on 3rd and 6 while the Colts were driving. Redwine ended the day just as nice. Even though he only made one tackle and played 19 defensive snaps, he recorded a 93.6 overall PFF grade (91.1 in coverage and 60.0 in run defense plays). He could very well carve out an increased role as the season and his career progresses, which has already become evident as he is slated to start today at Strong Safety.

Another Safety, Adrian Colbert, has also been a pleasant surprise for the New York Giants this season. Despite being waived by the Chiefs at the beginning of the season, Colbert has become a regular on the Giants’ defense. This past week, he recorded a career high eight tackles on 50 defensive snaps. He seems to be excelling more as a tackling safety than coverage guy, as he allowed 76 receiving yards on 5 targets his way, and one TD, which led to a perfect 158.3 for Dallas QBs when Colbert was in coverage. Colbert also needs to work on control as he committed two unnecessary roughness penalties.

For the third Safety who had a strong week, Rayshawn Jenkins continues to excel as he takes on a heightened role in the absence of various players for the Chargers, including Derwin James. Jenkins also tied his career high for tackles, with nine tackles. The Chargers have had some tough losses this season and that was no different this past week in Monday Night Football.

Unfortunately, the scapegoat for the loss was another ProCane and K, Michael Badgley, who doinked a 50-yard field goal off the upright, a field goal that would have won the game at the end of regulation. Badgley also missed his first extra point of the season in the same night. Despite Badgley’s rough night, another special teams player, P, Pat O’Donnell, had a strong game in last week’s Thursday night action. Out of his five punts, three went inside the 20-yard line – a key factor in Chicago’s one-point victory over the Bucs.

Another key factor in the Bears’ victory was a strong one-handed TD catch by the ageless wonder, Jimmy Graham. Graham and the Bears play the Panthers today, who feature CB, Corn Elder, another defensive standout this past week who tied his career high in tackles with four. Colts DE, Al-Quadin Muhamad, had a notable day as well, as he continues to increase his role. This week, Muhamad recorded 3 tackles, 1QBHit, 1 Sack, and 1 FF.

Week Six Projected ProCane of the Week: RB/Frank Gore – It is no secret the 0-5 New York Jets are in complete disarray. The latest evidence of that being the saga of Le’Veon Bell being released and subsequently picked up by the Chiefs. With Bell out, a Miami legend and ageless wonder, Frank Gore, will be the lead back (unless former Gator and rookie La’Mical Perine steals the job). This is somewhat of a bold prediction based on the Jets’ struggles, but, Gore is returning to Miami to play the Dolphins and will officially have a the lead role at RB – he’s gotta show out.

Proud of @trentharris33 for staying positive, putting his head down and grinding every day. Congratulations on signing with the NY @Giants! #FRM @FirstRoundMgmt @malkikawa pic.twitter.com/LKWvUT35EY

Miami Memorabilia Rocks an Auction: As trading cards’ value continue to increase, a Miami alum’s card sold big during an auction. Dwayne “The Rock” Johnson’s BumbleBee Tuna Miami Card, which was likely worth mere cents to get in 1994, sold for $9,000 earlier this week. Check your card collections for surprises such as this.

One of the surprise cards of the last six months: @TheRock BumbleBee Tuna Miami Card.

A PSA 9, which could be had for $750 three months ago, sold for $5,522 at @IconicAuctions tonight pic.twitter.com/JmgpbwQIws