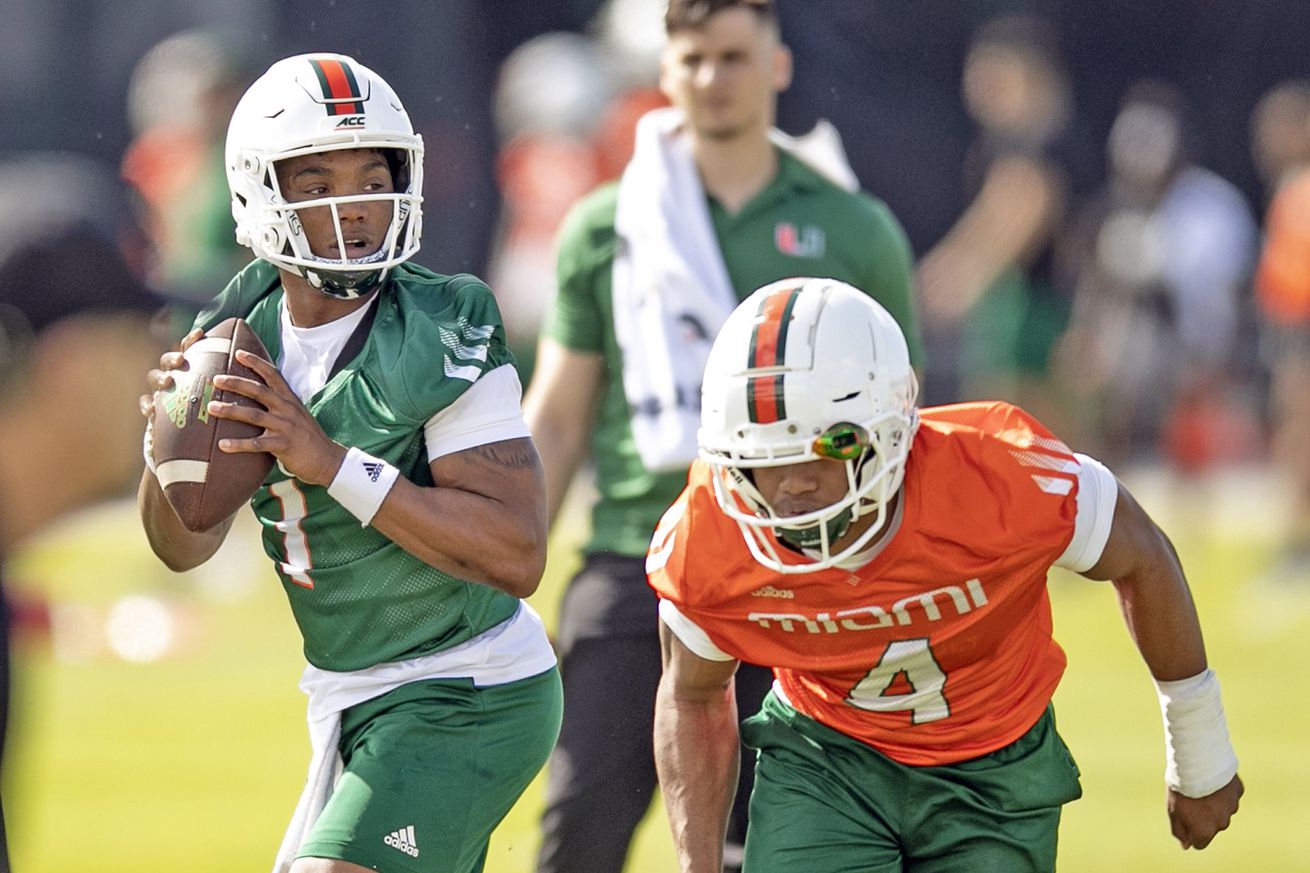 In case you were wondering, the Rhett Lashlee offense happened last night. We took 13 clips from the first half and compiled a video to see what worked for the Miami Hurricanes and what didn’t.

It finally happened. Rhett Lashlee and the Miami Hurricanes finally debuted their spread uptempo offense to the college football world. Then this happened. A 337 yard running opus that bludgeoned the UAB defense who ranked 20th vs. the run in 2019.

It got so bad for the UAB defenders that the ESPN announcers on the telecast candidly spoke about fights among Dragon teammates on the sidelines. They were hot, frustrated, worn out and getting gashed repeatedly.

Miami ran for 337 yards tonight. Since joining the ACC in 2004, the only game in which the Canes ran for more yards vs an FBS opponent came in 2014 at Virginia Tech when they ran for 364.

Obviously a vigorous fan debate ensued and you could consider sides were being drawn even among the State of the U staff. Offensive line, friend or foe? I know where I stand in the debate. When you rush for 337 you need to give credit where credit is due.

So far in the first half you see the athleticism of D’Eriq King. My Ferrari with feet. He did not disappoint and extended his FBS record for consecutive games with at least one passing and one rushing touchdown. His athleticism is elite. That is not debatable.

And with that, D’Eriq King extends his own NCAA record by passing and running for a TD in a 16th consecutive game.

Miami blistered the pace running 78 plays vs UAB. (They averaged a childhood favorite Nintendo 64 plays a game a year ago) 52 calls last night were of the rushing variety. At this point it should be crystal clear what the game plan was. Establish your rushing capability and subsequent dominance of it to the rest of college football.

The rushing offense aside but what about the passing game? Sure the 155 yards and one passing touchdown won’t make an Oklahoma fan blush in the slightest but we aren’t trying to date them anyways.

Miami signal callers were 65.4 efficient on the night and didn’t throw a single interception. In a game where your defense uncharacteristically doesn’t produce a turnover, having an offense keep the ball was imperative. Mission accomplished.

My overall take on the first half was that the Hurricane’s offense was the equivalent of a 12 cylinder sports car content on operating around 6 cylinders. No big passing plays, no assertiveness through the air but fully content on keeping the top up when rushing so effectively.

So it’s popcorn and BANG time. We start our first Student of the Game video for this 2020 season. Lots to unpack so it will be in two parts. First half is on deck. I walked away not so concerned about the pass protection as most and in awe of some of the plays D’Eriq King could make. What is your take?