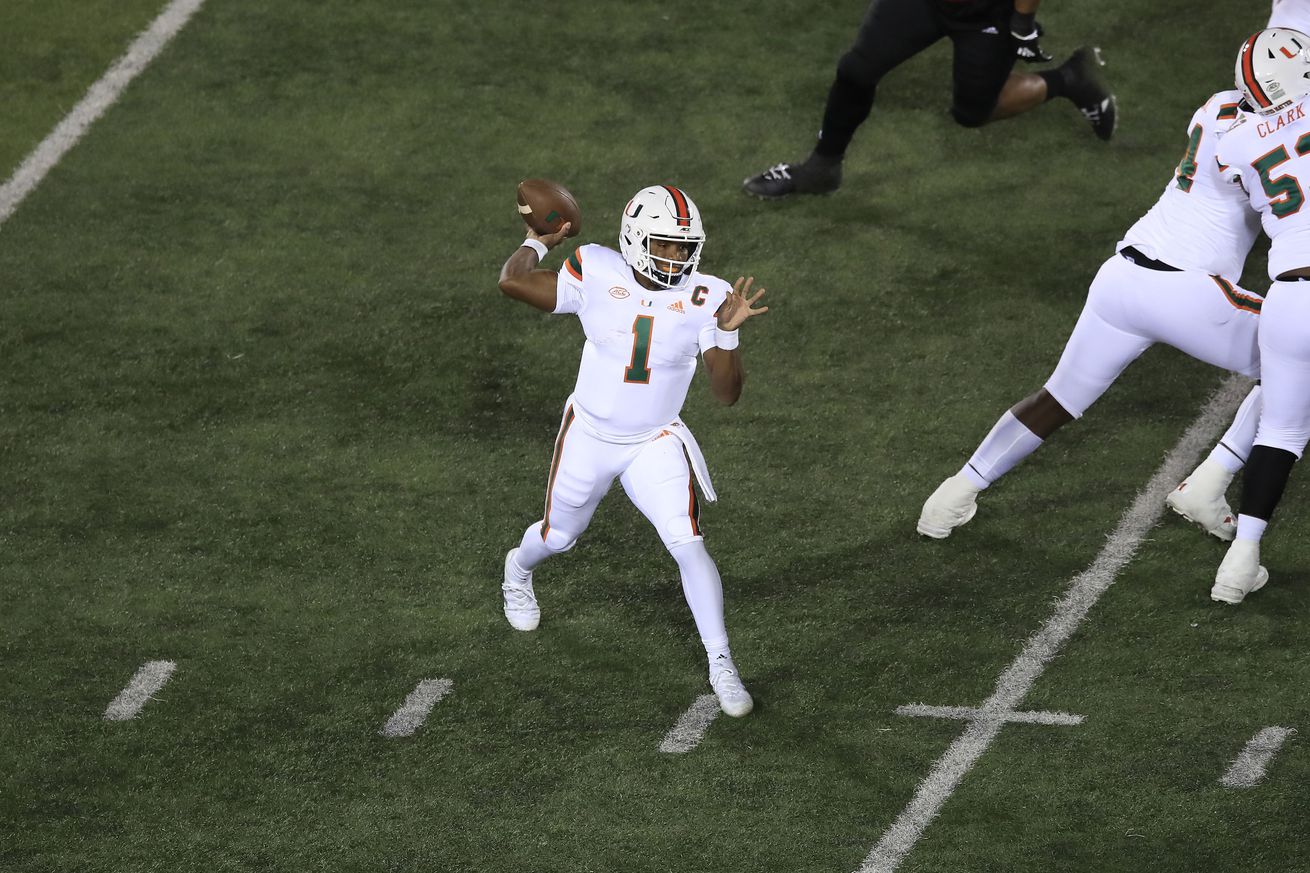 The rally in Raleigh is complete. The Miami Hurricanes come back from 10 points down to go 6-1 and stun the North Carolina State Wolfpack. Final score Miami 44 N.C. State 41

The Miami Hurricanes were bailed out by the defense vs. UVA when the offense only scored 19 points. Red Zone inefficiency was the main culprit of the point shortage. Fast forward to N.C. State and now the defense, who gave up it’s second 40 plus point barrage on the season, was in need of a savior.

The D’Eriq King led offense was happy to oblige en route to a record performance day by the fast footed gun slinger. Miami would end up with 620 yards which was broken down by 431 through the air and 189 on the ground. Miami averaged 7.5 yards a play and that is damn good.

All three starting wide receivers had touchdowns to include Mike Harley, Mark Pope and Dee Wiggins. Here you will see Mark Pope take a fake bubble and go to pay dirt. ACC teams have been very brazen in allowing the Miami receiving core one on one outside. The Hurricanes performance will no doubt have future opponents think twice on similar tactics.

I am still at it. 2nd half action. ACC teams you were cute daring the #canes to beat you outside. This game will have you rethink this prerogative. 620 yards didn’t happen by accident. #BANG!!!!!!!!!! pic.twitter.com/cFxyorqw1g

The fourth quarter was so polar opposite to how the Hurricanes started defensively. What did Miami do in particular to slow down the Wolfpack attack that was seemingly unabated to anything Miami did to get in its way? Miami would outgain N.C. State 213-6 in the fourth quarter.

It seemed that the effort along the front four picked up and a third down approach to get creative and exotic with post snap looks confused the N.C. State QB. Bailey Hockman was pressured into some timely sacks and had a critical interception which initially bounced off his receiver and gloriously ended up in DJ Ivey’s mitts in the fourth.

Miami used 3 down linemen looks late in the game on third downs and it had success. Here is an example of a field blitz with some zone behind it. Miami also showed press to the boundary one which was simply a bait and switch. Changing the post snap picture worked and a slick move by Couch made the difference.

3rd down meant the #canes would go 0 tech 3 down lineman and get creative. Here is a sack when you needed it most. pic.twitter.com/hym00YX0oe

The second half of the Rally in Raleigh is now complete. When you run 81 plays alone on offense this game could have been a trilogy. However we decided to settle this in two parts. One part popcorn. One part pencils. Student of the Game the video series in which even if the opposing kicker says suck it, we tell him to suck it right back. 44-41. #gocanes