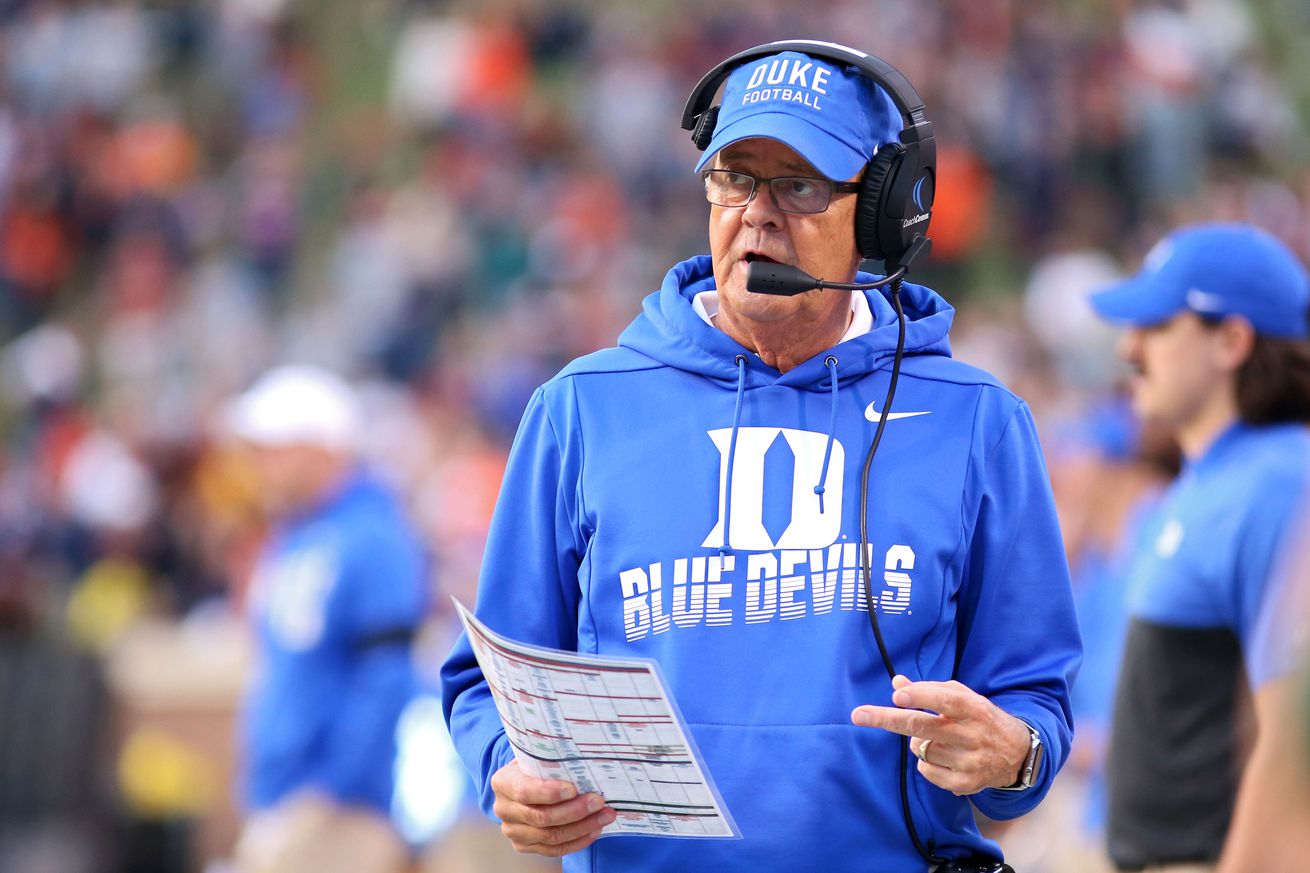 Coach Cut is back at the helm in Durham looking to shake up the ACC once again.

David Cutcliffe arrived in Durham, NC as the head football coach of the Duke Blue Devils in 2008. The Blue Devils were coming off of the Ted Roof disaster which saw four wins in four seasons including an 0-12 campaign in 2006. Roof replaced Carl Franks who had consecutive 0-11 seasons during his tenure.

The Blue Devils have been playing football since the 1922 season. Duke actually started off hot, they finished their inaugural season 7-2-1 under head coach Herman Steiner. Steiner only lasted one season in Durham and honestly I can’t find much about him on the internet.

Duke had a nice run in the 30’s and 40’s under head coach Wallace Wade, who came to Duke from Alabama. The Devils joined the ACC in 1953 and continued to have success under head coach Bill Murray until the 1960’s. Duke struggled post integration until Steve Spurrier became the head coach in 1987. Spurrier never got Duke back into the top-10 in the polls, but he did win the ACC title and parlayed that success in to the head job of the Florida Gators.

After Spurrier, Duke was mired in mediocrity. The Devils had one winning season (in 1994) from 1995 through 2012. David Cutcliffe even started off rocky with win totals of four, five, three, three, and six before hitting 10 wins in 2013. Cutcliffe has pulled off bowl appearances in six of the past eight seasons. That is unheard of in Durham.

Cutcliffe came to fame as Tennessee’s offensive coordinator working directly with Peyton Manning and Tee Martin. Cutcliffe left UT for Ole Miss before the 1998 season, a season in which Martin was legendary and the Vols won the national title. At Ole Miss, Cutcliffe worked magic with another Manning, this time Eli. Cutcliffe was 44-29 at Ole Miss but was fired anyway.

Duke is trying to figure out their quarterback situation. I covered the ACC Coastal QB’s for SOTU earlier in the summer, and Duke has a four-man race to replace Quentin Harris. Backup Chris Katrenick, former blue chip prospect Chase Brice from Clemson, dual-threat junior Gunner Holmberg, and freshman three-star Luca Diamont from Venice, CA are all vying to start behind center for the Blue Devils.

RB Deon Jackson made the 3rd team offense, and defensive lineman Victor Dimukeje made the 3rd team defense. Jackson ran for 641 yards and scored eight touchdowns from scrimmage in 2019. Dimukeje logged 8.5 sacks and 9.5 TFL’s a year ago.

Regardless of who is behind center, it seems as though Coach Cut has recruited in mostly dual-threat type QB’s to run his offense. A dual-threat in high school might translate to just a bit more than a pocket passer in college but the ability to run enough (ie. Justin Herbert, Trevor Lawrence) keeps defenses honest on both runs and passes.

I think one thing Coach Cut has done that might start to stymie his wins at Duke is become ‘too much like everyone else.’ Duke is running inside zone read, RPO’s and PRO’s like the bubble-draw pass-run option in the GIF below. Where Scott Satterfield at Louisville is doing something different, Duke has started to do things to the NCAA Offense.

Below I’m going to show you just a simple inside zone read, but I want you to see what’s probably the worst inside linebacker play of all time. This is up there with 2A high school ball in Oregon and I would’ve pulled my guys for this crap when I was out west.

Exhibit A, Part 1: The ILB’s aren’t lined up with the same alignment. Maybe one is extra deep like Zach Thomas so he can miss a few tackles and get blocked out of any important play.

A, Part 2: One of the ILB’s has taken read steps and already pursued the football a little. One has taken one single read step and the QB is already in their mesh with the RB. I get that super fast linebackers like Ray Lewis took a “squat read” ie. they just squat-dropped into a deeper stance at the snap, neither of these jabronis are Ray.

A, Part 3: Because the one is slow to react, he now sprints to the line of scrimmage and is completely over running the play and off balance. ILB no2 has drifted himself into the offensive line or “wash” and has made himself an easy block.

Exhibit B, Part 1: When the ILB to the top of the screen has to sprint to get in position, he over runs the play and the angle. Zone schemes are built on feeling linebackers and if you sprint and run you’ve dedicated yourself too early.

B, Part 2: A running back who didn’t average four yards per carry just broke a big run against your defense.

Here’s the GIF of the inside zone read play. And the lack of effort and testicular fortitude of the safety says it all. Manny Diaz and Blake Baker coached a team that didn’t know football, and didn’t back up the chains or talk in space. The safety makes a play so he doesn’t owe punishment (also stupid) for “loafing” when they watch film. You can’t up-down or run mental toughness or desire into someone.

I know that wasn’t a ton about Duke’s scheme but it’s pretty standard fare from the dozen other summer scheming posts I’ve put up. I figured a break down of a breakdown was a better use of time.

Here’s another clip of everyone moving but one ILB. He again has to sprint rather than scallup into position. He’s off balance, has to come to balance, freezes his feet, and misses the tackle completely.

He’s off balance, has to come to balance, freezes his feet, and misses the tackle completely.

Do you want to know how to fix these deficiencies?

I have an entire dissertation I could write about this topic. However, we’ll stick to bullet points.

1- Acquire most of your talent from high schools where you trust that the coaches are preparing their athletes for the next level both physically, mentally and emotionally.

2- Train for football, not for powerlifting (one rep maxes) or jogging (300’s and 110’s). There’s an old adage in football- run the mile and cut the winner. So why train for the glycolytic energy system when football is played in the phosphagen energy system. Layman’s terms: If football plays are 4-6 seconds, with 35 second breaks between plays, and drives are six plays, and breaks between drives are 3.5 minutes… that’s how you should practice and train.

3- Train for vision. There’s a book by Dr. Donald S. Teig called High Performance Vision that is a great starting point to improve visual ability and visual-cognitive connections which lead to eye-hand and eye-hand-foot coordination.

4- Train for sports. Stop going over bags that aren’t on the field during a game, and start training the way the game is actually played.

Football is played as an open-ended, read and react sport. If you only practice a pre-made course that anyone can memorize then that’s not playing football. Also when do you step over bags on a field? When do you just step over a body on a field? You don’t. It just doesn’t happen and definitely not often enough to train for it.

Sadly I don’t have any of the Patriots tackling and pursuit videos chopped up yet. But you can watch a lot of what they do below. I want my players mimicking the game as closely as possible without having to take on the blow of the game itself in practice.

1- Visually: Create the drill where the tackler has to track a ball carrier. Not a stationary bag or cone. Not even just a coach’s hand movement (can start there and progress up).

2- Cognitively: Create drills that replicate actual game situations. You don’t have to make contact, just get the situation right. Ex. a punt return up the sideline: have the coverage player have to sprint, come to balance, scallup, close off the field, and finish (tag the hip). This will teach the player to cut off the field in said situation.

3- Physically; If he or she won’t be going over a bag in the game, get rid of the stupid bags in practice. They’re pointless. It’s just “how it has always been done” stuff that coaches can’t shake loose.

Duke runs a fairly standard 4-2-5 defense. Against Dan Enos’ “hey let’s play a really tight small field against this allegedly slower team in Duke” idea that used no brain power or space- Duke adjusted and played almost a 6-2! Reminds me of my Pop Warner days down in South Florida.

If you believe Miami plays football faster than Duke, then why play in such a small, confined space. That’s for Wisconsin and Iowa who KNOW they don’t have football speed. Miami should be spread out and running if they play football as fast as advertised. But in all reality, they don’t. Miami players might arrive in Coral Gables with speed, but they don’t increase it, hardly seem to maintain it, and definitely don’t play with it.

Let’s hope David Feeley can figure out energy systems and speed development in 2020. Focusing on ‘conditioning’ is an outdated training method. It’s time to focus on visual- cognitive improvements, and sport-specific energy systems and movement systems.

The Hurricanes can beat Duke. We all know it. The first thing is to play to Miami’s strengths and those will beat Duke’s weaknesses. Get your allegedly fast players to play in space and outrun the allegedly slower Duke players. Done.

The second key is to care. It’s the head coach’s job to acquire, develop and deploy talent based on his or her program’s culture. Coach Diaz needs to be more than a slogan on a wall or a chain in a fancy case. Why don’t the players in the Miami program play like they care every game of the season?

The third key is to win the kicking game. Miami now has a top rated placekicker and a fantastic punter. Coach Patke is in a make-or-break season as a special teams coordinator. There are no excuses.