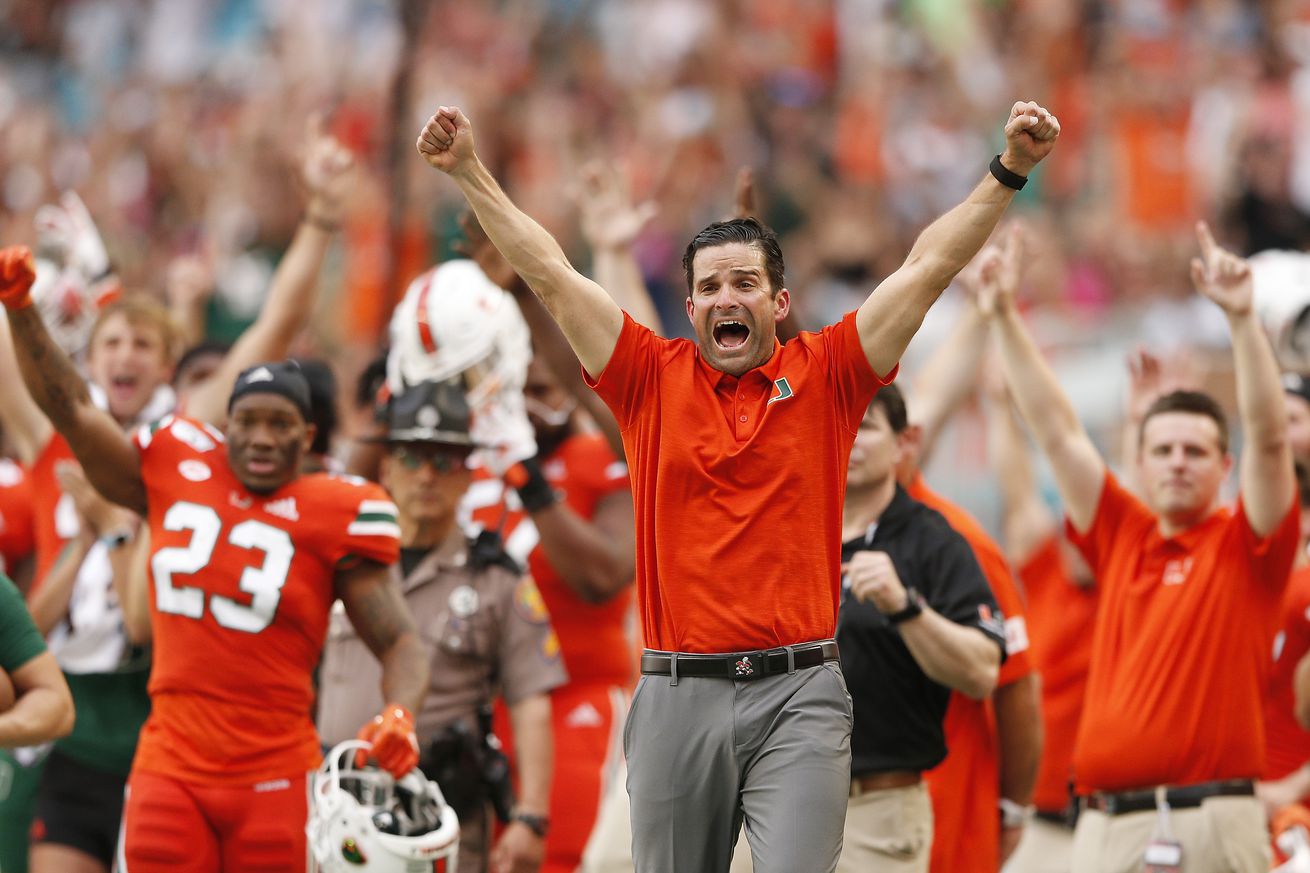 Miami head coach Manny Diaz enters year two at the helm of the Hurricanes. Year one did not go as planned and the ‘Canes and Diaz finished 6-7 in his inaugural season as the CEO of the program. Diaz, who returned to Miami after only a couple of days on the job at Temple promised to compete for the playoff in 2019. Instead, Miami spent the season edging out MAC foes and losing to two Group of 5 teams including FIU.

Miami has two All-ACC first-team players per Athlon’s pre-season information. Tight end Brevin Jordan and defensive end Greg Rousseau made the 1st team. Luckily for Jordan, OC Dan Enos was fired by Diaz and replaced by Rhett Lashlee. Lashlee has done a fantastic job of getting tight ends involved in the passing game, especially in 2019 at SMU. The underutilized Jordan caught 35 balls a year ago and averaged 14.1 yards per catch with only two scores.

Rousseau was statistically dominant in 2019 but many feel he took too many plays off. In order to change the reputation of Miami as a lazy, unmotivated program- Rousseau will have to turn up his work ethic in 2020. The lanky defensive end finished with a team-lead 19.5 tackles for loss and 15.5 sacks last season.

Temple transfer defensive end Quincy Roche is Miami’s only 2nd team player, with Houston transfer QB D’Eriq King and linebacker Zach McCloud on the 3rd team. Two AAC players were brought in through the transfer portal by Coach Diaz to fill holes on the roster. Miami needed another experienced pass rusher and a starting quarterback. McCloud was a redshirt a year ago to take over the starting spot inside in ‘20.

The most common personnel grouping in the NFL and NCAA is 11 personnel (one running back, one tight end). OC Rhett Lashlee doesn’t stray too far from that rule, either. He will deploy some 12 personnel (one back, two tights) and 10 personnel sets (one back, no tights), but not too often. However, he will line up in 10 personnel “pictures” (tight end in a spread alignment) often.

Lashlee will utilize run-pass options (RPO’s) so the old guard of fans are going to have to get used to seeing RPO’s in Miami’s offense. No, an RPO doesn’t mean the QB will run. Lashlee does have his QB run but typically on a designed inside zone read play, at least at SMU. And that’s the big question- which Lashlee O will Miami fans see? Will it be the 2019 SMU offense that outscored nearly every team in the nation or his more Auburn-leaning offense at UConn in ‘17? His UConn offense was more like Auburn in using more tight ends and motions via unbalanced formations.

I’ve written about Lashlee and his use of split zone with a stalk-bubble RPO tag before (here), so I’m not going to harp on it too much. Brevin Jordan will have to prove that he can block back across and kick the defensive end in order to establish himself as a true TE prospect in the NFL.

What I do want to mention is that the use of run-pass options will keep the defense from being able to jump plays and Lashlee plays against tendencies more than Enos. Where we all lost our minds about Enos being predictable, Laslhee is going to bust out a double reverse pass on the 2nd play of the game. He’s a high risk-high reward play caller at times and then a predictably safe play-caller who grads 5-yards a pop, too.

Above, at both UConn and SMU Lashlee returned to his Auburn roots. This is getting into Gus Malzahn’s shotgun wing-t playbook using a stacked formation in the shotgun while sending a slot in motion as a potential ball carrier or option pitchman. H-Backs, Tight Ends, slot receivers who can also run the ball… I love it. Will the SMU Air Raid concepts carry over to Miami? Below you can see Mesh go for a touchdown.

One question Miami fans have to ask themselves is whether or not Zach McCloud has improved as a linebacker in the last four and a half years in Coral Gables. I personally didn’t see growth at the position, and really not much growth from Shaq Quarterman or Michael Pinckney, either. That’s troubling as Manny Diaz was the DC and their position coach. He finished their recruitment post-Golden and was in charge of developing and deploying 2019’s starters as well as McCloud.

If McCloud hasn’t improved immensely for 2020, watch out. The ACC Coastal has gamebreaking running backs at UNC (Javonte Williams and Michael Carter), Georgia Tech (Jordan Mason and Jahmyr Gibbs), and UVA is going to pound the rock in their big boy football style. Michigan State will try to muscle Miami, too. If Mike Norvell makes it to the season he’ll try to run the ball as well at FSU.

The ‘Canes will have a dominant pass rush from Rousseau and Roche but the interior is the fear. John Ford, Nesta Silvera and others will have to step up inside and do less dancing and more dominating to take the pressure off new inside linebackers.

DC Blake Baker has to stop feeling the need to blitz when his front four has this much talent in the pass rush world. This will help keep linebackers in their run fits, and defensive backs will have help in coverage. Miami can’t continue to lose sight of TE’s and RB’s like they did in ‘19 against Louisiana Tech and Virginia Tech.

Miami is talented in the back four or five, but they have to prove they’re worth the four-star hype. Bubba Bolden, Gurvan Hall, Al Blades Jr, DJ Ivey and others are blue chip players- it’s time to be developed, deployed, and perform that way.

The ‘Canes need to improve their QB and offensive line play immediately. That’s the first key to success. Open holes, protect the QB and allow King to flash his abilities. Lashlee’s scheme should take pressure off of the O-Line and adding in a JUCO transfer and Houston transfer in Jarrid Williams should help with depth and competition.

The kicking game has to improve. Once again Miami replaced the player but the coach remains the same in Coach Patke. Miami improved their punting with Lou Hedley but the kicking game and return game struggled until KJ Osborn did admirable but far from gamebreaking work towards the end of the season. Miami has to replace their returners and get better in their coverage play, too.

The true key to success is Coach Diaz finding his voice. Diaz needs to spend this off-season doing more than riding yachts and hitting the portal. Changing the offensive staff is a good start but if the locker room never recovers from the cancerous 2019 season what is it all worth? More buyouts and a new regime in ‘21 or ‘22.