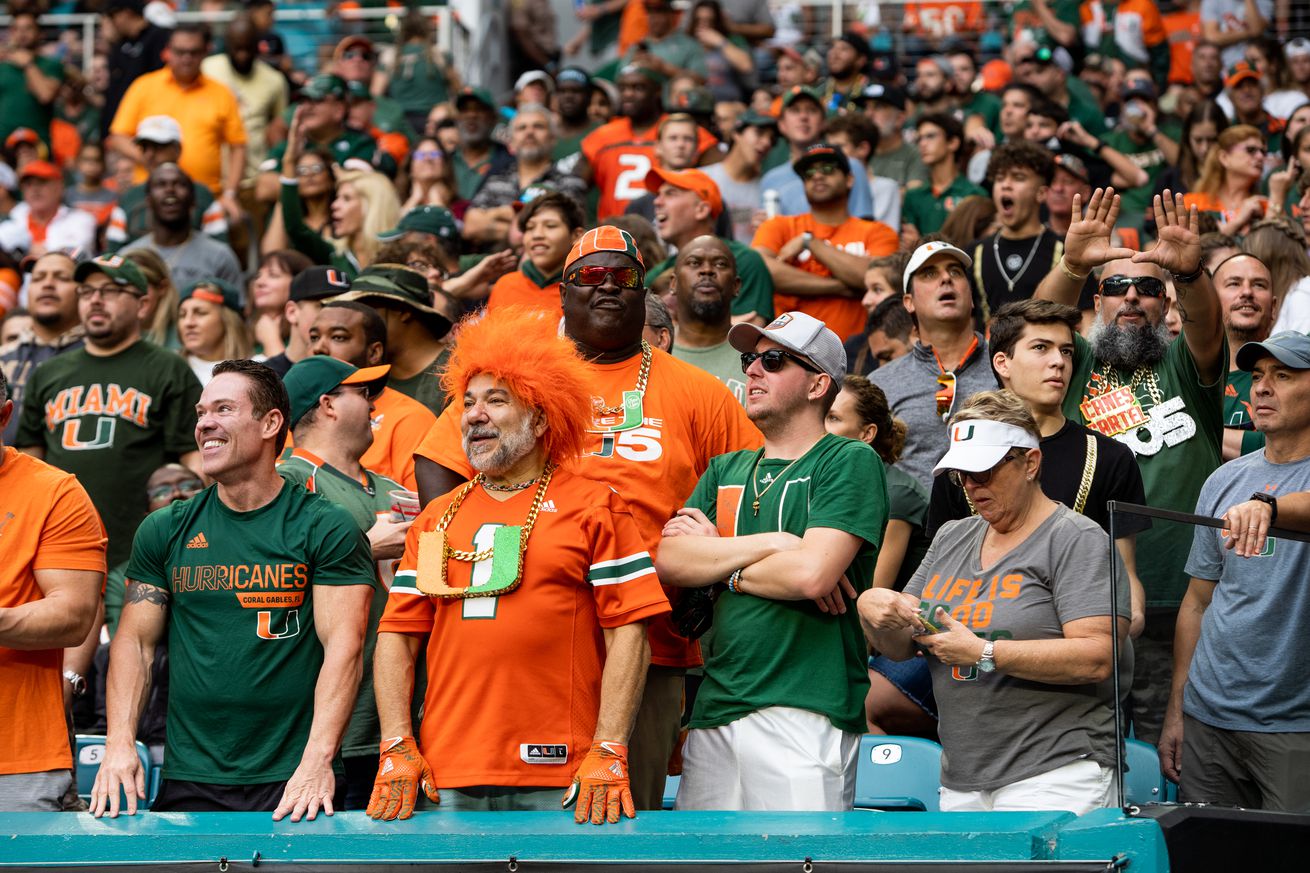 For Miami, protecting Hard Rock Stadium must also mean winning there as well.

This past weekend, Manny Diaz took his team to Hard Rock Stadium to have a little workout. While there, the Hurricanes rand and went through drills while highlights of their 2019 home loss to Virginia Tech played on the jumbotron.

Protect Hard Rock. Losing at home should never EVER happen for the Canes pic.twitter.com/k1eaotdGAx

This is something that Miami has done now for two off-seasons, as coach Diaz is trying to get it through his teams head; You don’t lose at home. Only problem is, the Canes lost twice at Hard Rock Stadium in 2019, and once in 2018. A school that once boasted an NCAA record 58-straight home victories, lost to a 3-9 Georgia Tech team last year in front of their fans.

Of all the goals for the Hurricanes heading into the 2020 season, one of them must be going undefeated at home. 7-0 at Hard Rock. UNC, Florida State, Pitt, doesn’t matter, Miami must protect their home turf, not by running around it in March, but by winning football games there in October.

One of the goals for Manny Diaz and the Canes in 2020: Go 7-0 at Hard Rock Stadium. That place was a factor in 2017 and became a legit home field advantage, do it again.

Winning at home in football should be expected in general, or any sport for that matter. Good teams don’t just win, they rarely, RARELY, ever lose at home. Nick Saban and Alabama won 31 straight home games from 2015 to 2019, and his record at Bryant-Denny Stadium since arriving in 2007 is 82-8. Since 2002, Tom Brady and the New England Patriots have gone 141-27 at Gillette Stadium.

Patriots go undefeated at home in the regular season for a NFL record 8th time! #GoPats

Opposing teams used to have nightmares just thinking about having to go into the Orange Bowl and play the Canes in front of their fans. It was loud, crowd was nasty, and Miami was good. There’s a reason why UM didn’t lose a home game for nine years from 1985 to 1994.

One of the reasons people miss the Orange Bowl! Listen to the commentary and the Canes Fam gettin in the Sooners heads!#ItsACanesThing…and you will not understand pic.twitter.com/cexAQvy6bv

Hard Rock Stadium has proven that it can be an intimidating place to play as well. Hurricanes fans are the same as any other fans for Miami sports teams; if you win, the place will be filled and it’ll be loud. Canes fans definitely get a bad rep when it comes to attendance, but when UM is winning, they’ll make their stadium one of the toughest places to play in the country.

2017 was a great example of this. Miami started the season 10-0, led by great players like Travis Homer, Braxton Berrios and Jaquan Johnson. Another reason for their success was their home-field advantage.

Against Virginia Tech, Notre Dame and other visiting teams, Hard Rock Stadium became a house of horrors with deafening noise levels that caused many false starts from opposing offenses. Oh, and Miami went 6-0 at home that season.

Herbie said that hard rock stadium at night was similar to going into death valley Clemson at night.

Sr Notre dame LB said hard rock was the LOUDEST stadium he had ever played in.

Home field advantage? Yeah we got that covered. #canes pic.twitter.com/8hzwK2FD0E

The Hurricanes feed off that energy the hometown crowd can bring to Saturday’s, simple as that. Case in point, when the Seminoles were in town in 2018, Miami fans came alive as the Canes clawed their way back from a 27-7 deficit. Being in that stadium myself, I can say without a doubt, loudest game I’ve ever attend, and it definitely had an effect on both teams.

Throwback to the madhouse Hard Rock was against FSU last year https://t.co/Bq9yxHl8QY

Miami doesn’t even have to be a top-five program either for Hard Rock to be noisy. This past fall during the Hurricanes win over Louisville, many fans and even recruits came away from that game saying how tremendous the fans were. And that was for a Canes team that came into the day with a 5-4 record.

Yesterday was a GREAT win for UM. This team is growing up before our eyes. Hard Rock Stadium, even when not at capacity, is extremely loud & will be a formidable force for visiting teams when this program finally is “back”. It was rockin yesterday & were just gettin’ started. pic.twitter.com/HFWEBqRFCn

The point is, if the Hurricanes win, Miami fans will pack the place and make it hell for anyone visiting. For coach Diaz, it’s quite simple; Protect Hard Rock.