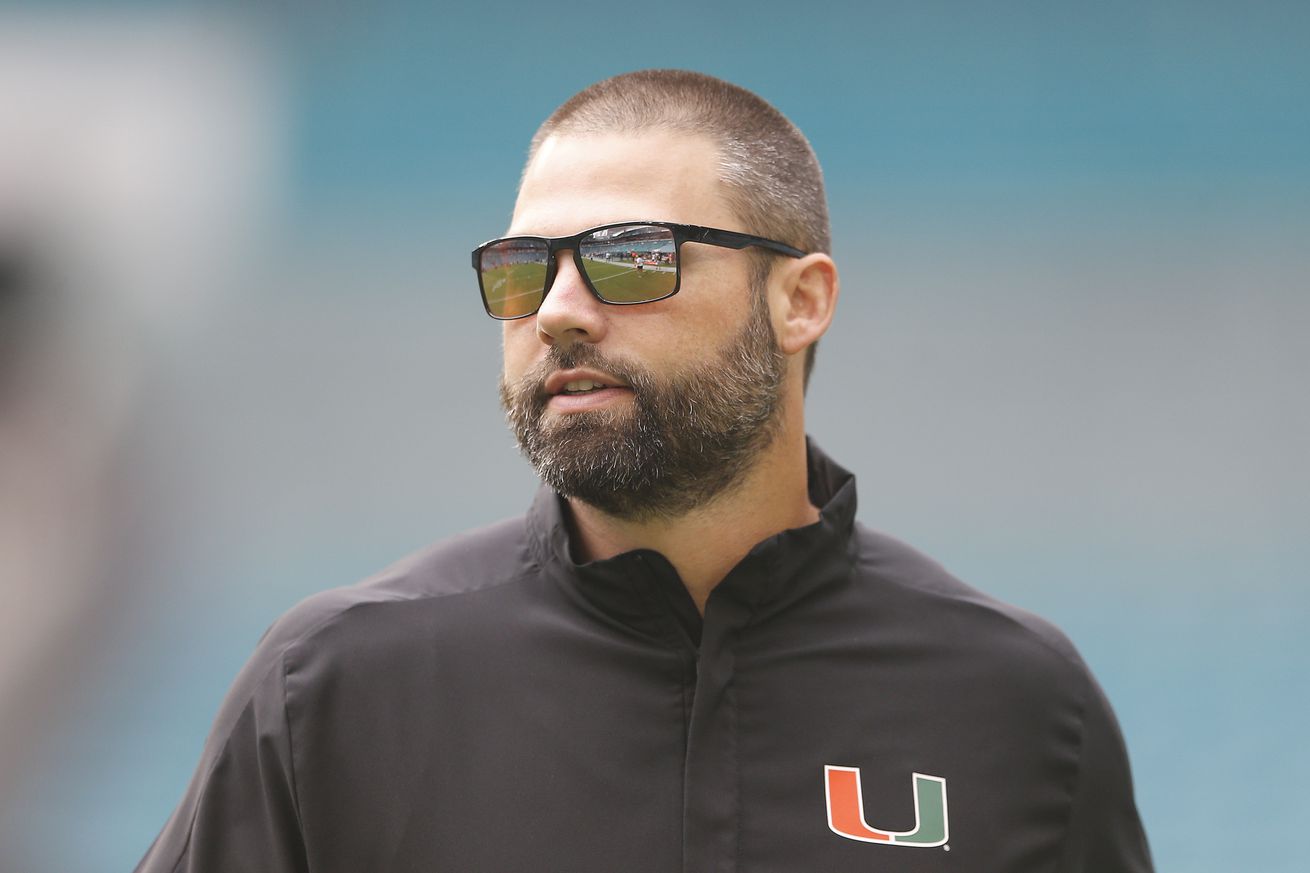 Friday the 13th is as Good a Time as Any to Stop Being a Jinx, and Start Being A Fan Again

Do I have your attention?

This is a Public Service Announcement.

Its hard. I get it. I’m LITERALLY 3 out of the 4 choices above (entirely too optimistic to be the 4th). Its been nearly 20 years since the Miami Hurricanes have been CONSISTENTLY good year in, and year out. We probably don’t have more than a handful of guys on the roster that will be a factor on Sundays, and that’s OK.

I can hear it now:

“BUT THATS THE STANDARD!!!”

“Are you SERIOUS RN?”

We should be challenging for NATTYS! Nothing else!”

Have you SEEN this coaching staff???”

These are all things that I am sure will be said during certain individuals reading this right now, and has been said multiple times throughout the year. The thing is, as it stands RIGHT NOW, that’s just not where Miami IS. Where Miami is, is on a journey, one that feels like the Odyssey that has gone on WAY too long and feels like by the time the hero Hurricanes show up the war will be over.

The good news is? The Hurricanes are on the way back.

WE ARE 6-1. If this were a movie we would be at the part of the movie were the leading character realizes their value, initiating a montage scene that shows the transition from “AHA!” to “Ahaaaaaa” (that was for my Coming To America fans.”)

The Hurricanes are on the come up, and this isn’t like 2017. That season was some wat fools gold.

Of the last 5 years, its the only seasons where most trends that say a teams record should be “such and such” were thrown out of the window.

That year the Canes went into halftime LOSING a whopping SIX GAMES, including against the worst North Carolina Tar Heels team in nearly two decades, a bad Georgia Tech team, a 6-7 Virginia Cavaliers team, and, drum roll please TOOOOOLLLEDDDOOOOOO – AT HOME. That team, for all of its warts, was proclaimed to be BACK! We loved the turnover chain, the defense was ELECTRIC, Mark Richt was home to resurrect us from the dead, and we found a quarterback post Brad Kaaya (Malik Rosier, he who holds the record for most total touchdowns by a Miami Hurricane quarterback in a season).

That team went on to lose three in a row by an average of EIGHTEEN points a game.

There was the team BEFORE them, in 2016, that start out like gangbusters. We had the right quarterback in Kaaya, the Bermuda Triangle was reborn with Shaq Quarterman, Michael Pickney and Zach McCloud as freshman (yes, that Zach McCloud) and through the first four games of the season, Miami was outscoring teams by more than 30 points! Half way through what would eventually become the 7 loss in a row to Florida State, we were WINNING at halftime by 10. The same season that Miami went 10-3-1 in the first half of games, on losing to the aforementioned FSU after a halftime lead.

As Steven Tyler used to scream, we, as Canes fans have become, Ja-Ja-Ja-Jaded.

And the Canes are the Ones that Jaded You.

The Canes are good again. Quite frankly, they are great.

STOP! before you (if you already haven’t tried to) kill the messenger, on Friday the 13th, of all days, consider this, from an Article About What It Takes to Compete for the College Football Championship:

Before a team can pop bottles in the VIP section of the College Football Playoff, you must FIRST enter the club. Since the inception of the CFP IN 2014, that club has almost exclusively consisted of the top 2 two teams from each conference. The exceptions are Ohio St and Notre Dame, who were voted into the Playoffs without being in a conference championship.

During this era, since 2014, the top two teams in each conference ranked, on average, 28th on Offense and 27th on defense.

However, if we split off the champions of this group and look exclusively at the teams that were good enough to make their conference championship but lost, those averages lower to 41st on offense and 29th on defense. Only 2 teams of 60 teams ranked outside BOTH of those averages. Both came last year in Texas (47th offensively, 57th defensively) and Northwestern (100th and 41st, respectively).

And that Miami team that made it to the 2017 ACC game as the perennial Clemson sacrificial lamb? 59th on Offense, and 28th on defense, just barely sneaking in. (2019’s Sacrificial Lamb Virginia was 40th and 62nd)

I know what your thinking?

“Where does Miami Rank? I bet not even close to that!!!”

Well then go ahead and pat yourself on the back, because Miami has not surpassed either number.

But don’t pop the champagne yet, because we are VERY close.

Miami is Currently 39th on offense, and 42nd on defense. When you consider that, ON AVERAGE, since the inception of the CFP system, that the difference between 39th and 28th on OFFENSE, and 42nd and 27th on DEFENSE, is ONLY TWO POINTS, it tends to put things into perspective. That’s pretty damn good.

The last time Miami’s Offensive and defensive rankings were both top 45 in the nation, you have to go back to 2004. The last time they were this level, only 3 spots apart, in the top 45? You have to Wobble yourself back three more years to the best team of ALL TIME.

NO, THE HURRICANES RIGHT NOW ARE NOT CLOSE TO THAT TEAM.

But they are closer than they’ve been since 2002. They have players that would have started over other players on that team in multiple spots. And they are only going to get better.

Manny Diaz in the second half of seasons? His defenses have improve in the latter portion of the schedule EVERY year. Not including FCS and Bowl Games, Manny Diaz and the Miami Hurricanes have given up LESS Points Per Game in the Second Half of the Regular Season than the First Three Yrs in A Row. Versus the ACC, Since 2016 Manny and Miami are:

Manny and Miami are:

As for the offense, unless you have been living under a rock, things are starting to click in a very scary way, for opposing defenses that is. Miami and D’Eriq King have been a good marriage so far, but initially just could find a way to hit the deep ball and really open up the offense. Well, since the Pitt Game, the Canes have been going OFF, vertically.

The first 4 games of the season, D’Eriq and the offense were a below average, 7 for 30 on deep balls for 249 yards and 3 touchdowns. Since then? The success rate has gone WAY up on deep passes, to the tune of 12 attempts for 18 completions (66%), for a whopping 357 yards and 4 touchdowns.

And all without arguably our best offensive player not named D’Eriq.

Speaking of success rate, (A common statistic used to measure efficiency by determining whether every play of a given game was successful or not), Miami has increased the rate of success on offense over the last three games from 38% to 45%, meaning that with the initiation of a successful deep game, the ENTIRE offense is now beginning to hit on all cylinders, which is scary to think, considering Miami won’t face a top 75 defense for the rest of the season.

Miami may not be the 2001 Canes, but they are trending up and fast. Don’t be that fan who dies on that hill of disdain and negativity, never appreciating what’s right in front of you. Enjoy what the 2020 Canes have been so far, and be excited for what they are becoming. Because this team, is better than any team we have had in a long time. They may not live up to every single unreachable goal you set for them, but they still a GREAT team to watch.