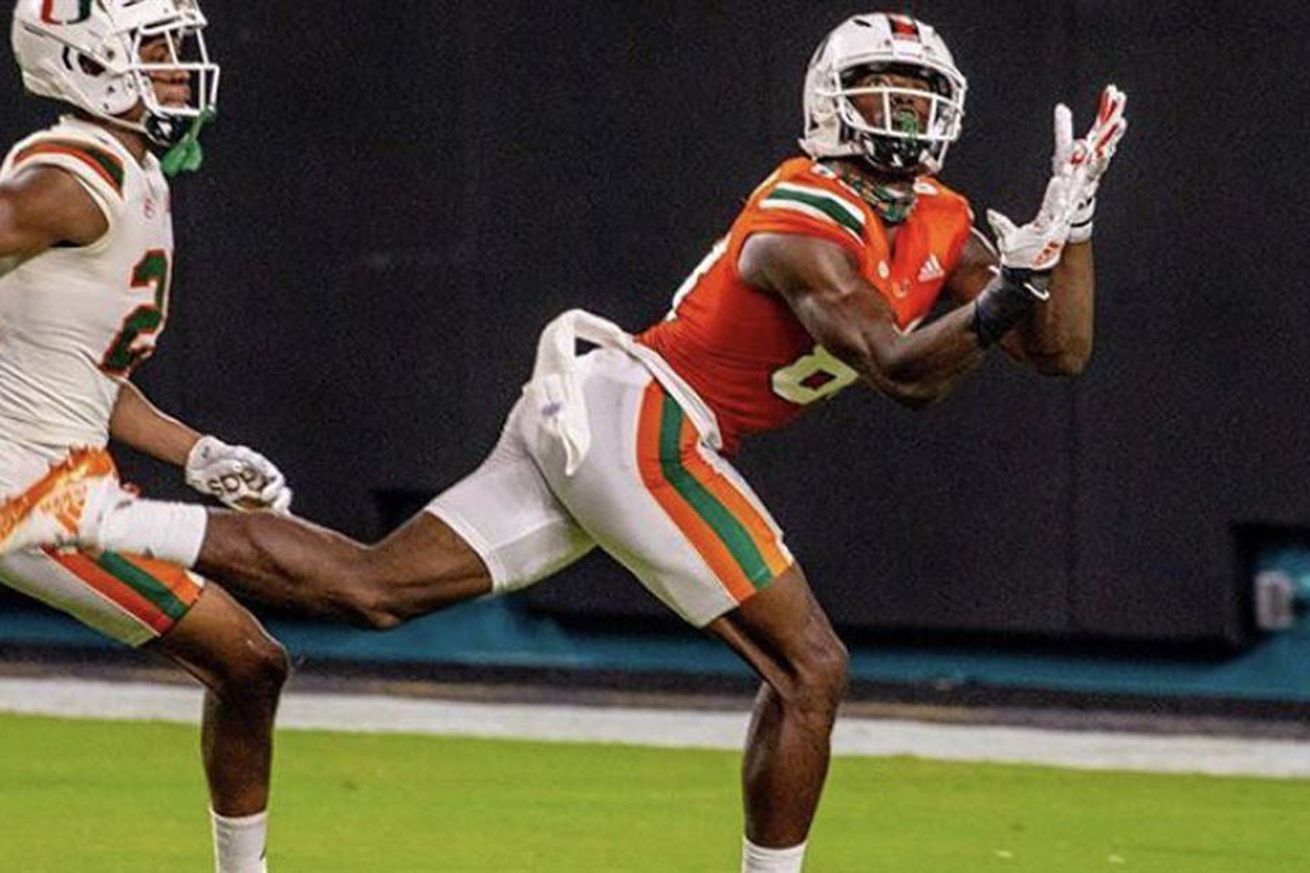 Why Mike Redding Is the Receiver Miami Has Always Needed

You will not be able to stay home, brother

You will not be able to plug in, turn on and cop out

You will not be able to lose yourself on skag

And skip out for beer during commercials, because

The revolution will not be televised

The Revolution Will Not Be Televised

The Revolution is here, and soon, so will Michael Redding III. As Canes fans endure a campaign that has yet to have a feature game from its stable of wide receivers, despite a Heisman listed quarterback in D’Eriq King, the search continues for someone to step up and take lead from the wide receivers group. Since the departure of Ahmmon Richards, Hurricane fans and Hurricane coaches have watched in disappointment as player after player fell short of the hype.

As observers, we see a place for a big, strong and aggressive receiver to lead and complete the receiving attack. As is usually the case, warranted or not, the new man on Campus usually fits the bill.

Stay sleep y’all. I see everything about the other cats but this man right here is a technician with catch radius, hands, ELITE athleticism and is BIG. Redding III my guy. https://t.co/m4EUjXTIjM

At least i know this dude is gonna try and go up and snag something pic.twitter.com/aNlUzT9mCI

I think we ALL would love to this happen tomorrow, AMIRIGHT?

Michael Redding III is the physical, Dez Bryant-esque, Leonard Hankerson-eqsue, and if we really have a real one, ANDRE JOHNSON-esque big bodied receiver that can beat you in many different ways.

Much has been made of the other recruits coming into the 2020 class, and for GREAT reason. Jaylan Knighton and Don Chaney were tops in South Florida and in the COUNTRY at the running back position. Tyler Van Dyke has the pedigree at quarterback. Chantz Williams and Jalen Rivers were the package deal of a lifetime. Most importantly, Avantae Williams became the biggest addition to the roster via National Signing Day in some time.

This all allowed one Michael Redding to slip in unnoticed. He of the college ready body. He of the IMG Academy pedigree.

Previously the State of the U highlighted both Redding’s ability to crack the lineup as a freshmen and his extreme athleticism for his body size.

From Debates on Greentree: Who Will Be The Miami Hurricanes Best Receiver? In June:

4. Michael Redding III – My dark horse sleeper. If any player can even come close to what Ahmmon Richards did, its Michael Redding III. Redding is the full package. 6’2, 200 pounds, 4.5 40, 4.3 shuttle, 41 inch vert. That’s EEELIIITE. Additionally, Redding cut his teeth at K.J. Osborn’s alma mater, IMG, culminating in a very good show of football acumen and a business like demeanor. His ability to high point, make contested catches and fight are well documented. So why only 4th on the list? Initially one could point to his wrist injury in camp but the current pandemic leveled the playing field in that regard. No freshmen has starred for a Likens or Lashlee offense, and the Canes have had only one freshman represent them as its clubhouse leader in yardage, the aforementioned Ahmmon Richards. So its not anything Redding has done, its just that history doesn’t favor his chances, but I LOVE his prospects.

From our NFL Comp Article for the 2020 Class in February:

What do those numbers look like in action? Look no further:

Can’t help but to remember this play and hope that Coach Diaz puts Redding III in as a starter so he can win these 50/50 balls for us.

This is how you ATTACK a football and beat those 50/50 battles. #ReddingIII pic.twitter.com/81kWBvU9BV

What Redding brings more than anything else is the missing piece to an ideally structured attack from the wide receiver position. With Mike Harley and Mark Pope, we have the quick, phone booth type players that excel in the slot and are great in space. Players like Dee Wiggins and Keyshawn Smith have better size than the players above but profile best as dep threats to take off the top of the defense. Jeremiah Payton may be the closest thing to Redding in his ability to be a big body creating space physically and be a first down threat.

What Redding gives the room that hasn’t been seen for some time is the “do it all” type of receiver. As seen above, he can win the 50/50 and be a redzone threat. He can beat his man off the line and create yards after the catch on quick throws. He even has the explosiveness to get behind his man down the sideline and blow the top off a defense.

I believe that this skill set is the missing piece to allow the other members of the receiving core to settle into what they do best, rather than forced into unnatural roles, and allow everyone to play as fast as Coach Rhett Lashlee likes.

At this point it is all about opportunity. It will be interesting to see if the offensive coaching staff can do what’s necessary and truly create competition by expanding more snaps to Redding and unleash a complete receiving attack.

The Revolution Will Not Be Televised

The revolution will not be televised

The revolution will be no re-run, brothers

The revolution will be LIVE!