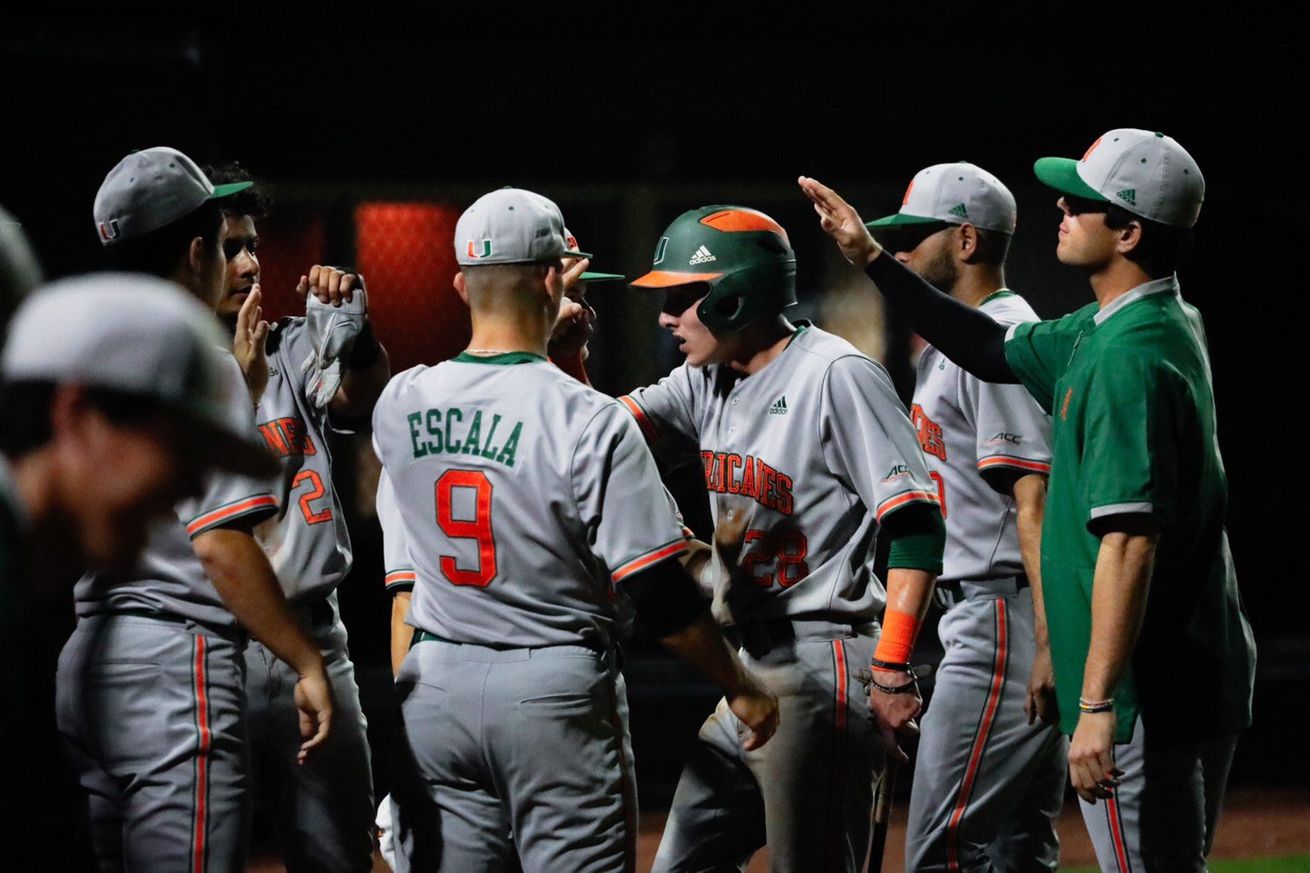 After a 4-0 week that saw a win over USF and a sweep of the Towson Tigers the Miami Hurricanes enter a week that sees a mid-week challenge against the Florida Atlantic University Owls and the start of ACC play on Friday against the Pitt Panthers.

The Hurricanes perfect week saw them hold steady in most polls. With the Hurricanes a near consensus top-10 team heading into the start of the conference slate:

A 4-0 week helped put the Canes in the top 10 of three polls! pic.twitter.com/a1OcrfkAPu

Despite a solid 8-3 start to the season the Hurricanes are still not where they want to be in many respects. Miami is second worst in the conference in batting average and slugging percentage, at just .249 and .375 respectively, and is in the middle of the road in on-base percentage. The Hurricanes strength offensively has been driving the ball out of the park, with 12 home runs, fourth best in the ACC, on the year. Heading into the later weeks of the season the Hurricanes’ offensive approach will have to improve.

One notable bright spot for the Hurricanes so far this season has been improved defense. The ‘Canes are the fourth best defensive team in the ACC right now, and if that can continue through the rest of the year Miami will have made significant strides defensively in 2020 as compared to 2019.

The Hurricanes have a tougher week ahead of them. The offense will have to improve as Miami begins to play road games more often, and as the competition increases as ACC play begins.

Miami plays their first road game of the season on Wednesday afternoon against a solid FAU team. The Owls were projected to finish second in the C-USA before the season began and have a legitimate shot to win the conference and earn an auto-bid to the NCAA Tournament.

FAU is off to a 7-4 start, but don’t underestimate them due to their record. Every single one of their losses was to an opponent ranked in the Top 15, including a loss to No.5 Texas Tech, two losses to No.11 Florida State, and a loss Tuesday night to No.1 Florida. The Owls are extremely talented, and playing them on the road will be one of the first challenges of the season for Miami outside of the weekend series against No.1 Florida earlier in the year.

The Owls have gotten a great start out of Mitchell Hartigan to start the season. The sophomore outfielder is batting a team-leading .378, and is also second on the team in slugging percentage and on-base percentage. B.J. Murray has also been a key player for the Owls so far this season, with the infielder having hit three home runs already this year.

FAU’s pitchers have struggled so far this season, with an ERA sitting at 5.71 through 11 games. It’s important to remember that the Owls have played extremely tough competition so far this year. With Miami already struggling at the plate, taking good at-bats will be key on Wednesday.

Miami has placed an emphasis on mid-week games since Gino DiMare became head coach, and FAU has traditionally given them some of the toughest mid-week games in recent years. The Owls will be hungry for a statement win at home on Wednesday evening.

The Hurricanes start ACC play with a home series against the Pitt Panthers this weekend. Pitt has traditionally been one of the weaker teams in the ACC over the last several years, but they’re off to a strong start in 2020. The Panthers sit at 10-1, are on an eight game win streak, and haven’t lost since the first Saturday of the season.

Pitt has also had a really strong offensive start to the season. The Panthers sit fourth in the ACC in batting average, second in slugging, first in on-base percentage, and fifth in home runs. Junior catcher Riley Walsh has been the Panthers best hitter so far this season, with a 1.397 OPS and two home runs on the season so far.

Pittsburgh certainly seems like a strong opponent, at least stronger than usual this season. However, it should be noted that Pitt hasn’t played an opponent like Miami yet this year. The Hurricanes are probably still the stronger team, but this series should still present a challenge.

The Hurricanes starting rotation has been elite so far this season, especially on Fridays and Saturdays with Brian Van Belle and Chris McMahon. Sunday starter Slade Cecconi has also been solid, although it’s unclear if he’ll start this Sunday after he was hit by a hard comebacker in his last start against Towson.

Miami will need to play well this weekend, but the expectation should be getting off to a winning start in ACC play. The Hurricanes will hope for a strong weekend at the plate and on the mound to boost them as they head into the toughest part of their schedule.