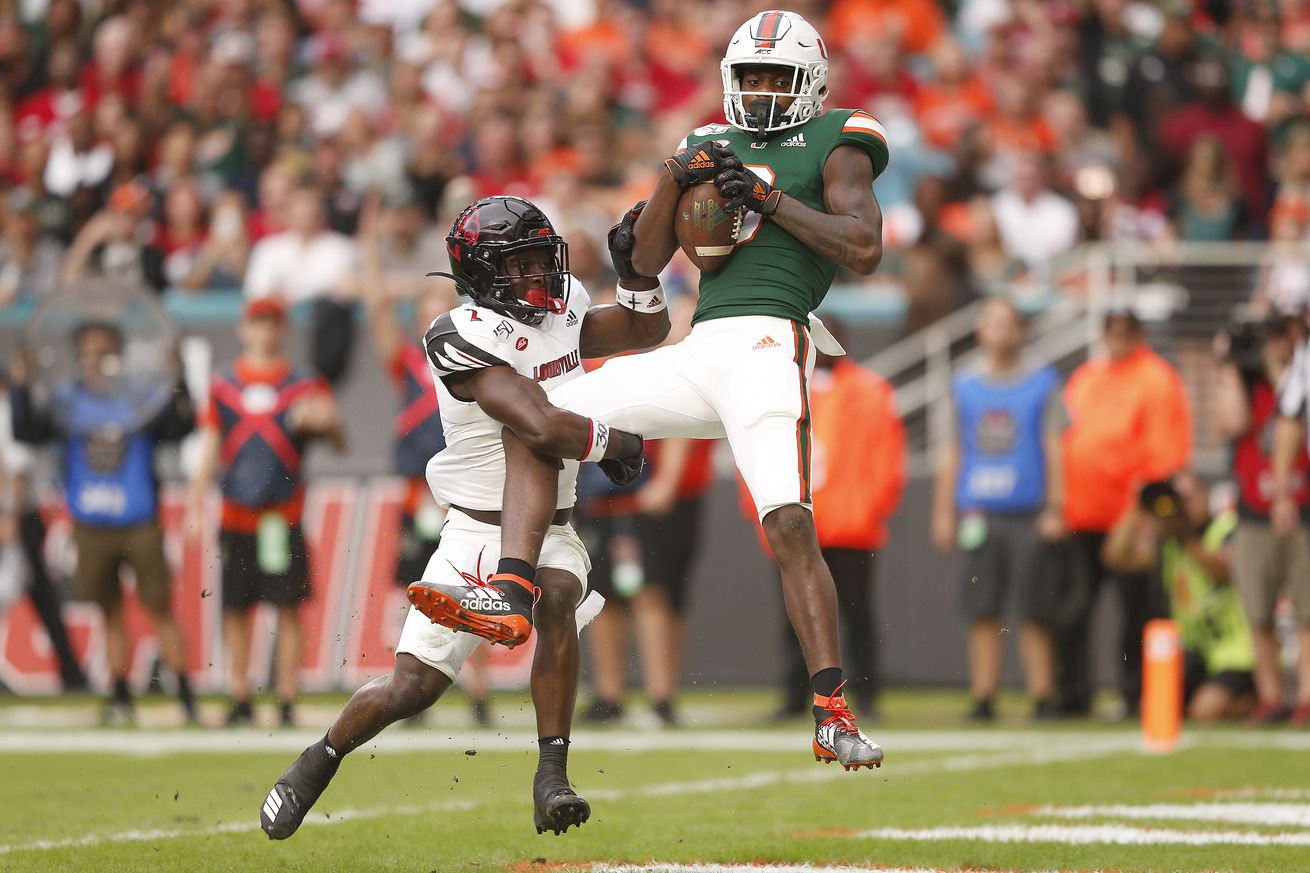 Dee Wiggins (8) catches a touchdown pass for Miami in its blowout victory over Louisville in November 2019. | Photo by Michael Reaves/Getty Images

The Miami Hurricanes will look different at certain positions tonight when they open their season against UAB at 8pm at Hard Rock Stadium.

The Hurricanes are coming off a disappointing 6-7 season in Manny Diaz’s first year as head coach so change was inevitable and needed.

With new faces expected to be all over the field for the Hurricanes, here are three positions for fans to keep an eye on during tonight’s game.

Redshirt junior Bradley Jennings Jr. will make his first start in his fourth year in the program tonight when he takes the field at middle linebacker.

He will start alongside redshirt senior Zach McCloud at weakside linebacker while sophomore Sam Brooks will work in at both positions, according to defensive coordinator Blake Baker.

“The leadership capabilities that he has shown, we got to see a lot of that this offseason,” McCloud said of Jennings. “I have to commend him for being as tough as he is.”

How Jennings looks in his first start is an intriguing storyline for the Hurricanes. Diaz said this week that Jennings is one of the hardest hitters on the team. Will that be seen against the Blazers?

Also worth keeping an eye on is just how many snaps Brooks plays. Is the position going to be closer to a 50/50 split with Jennings and Brooks or will Jennings and McCloud play a huge percentage of Miami’s snaps at linebacker tonight?

Will we see Waynmon Steed tonight? Like Jennings, Steed missed the entire 2019 season while he recovered from offseason surgery. He also sat out the 2017 college season after discovering that he played part of his senior season at Miami Central High in 2016 with a torn ACL.

“That’s something we don’t see too often,” McCloud said of Steed fighting back from multiple serious injuries. “I’ve got to commend anybody who has to go through anything close to that…I am excited to see what this season has for him.”

One more question at linebacker: Will we see any of redshirt freshman Avery Huff or true freshman Corey Flagg Jr. if Miami builds a sizable lead? Both have been identified by members of the coaching staff during the preseason as players to keep an eye on for the future.

Left side of offensive line

Miami is working in two new starters on the left side of the offensive line in left tackle John Campbell Jr. and left guard Ousman Traore.

Campbell has started two games previously in his Miami career but never at left tackle. Traore started 11 games at Hutchinson (Ks.) Community College in 2018 but only played in two games as a reserve for the Hurricanes last season.

This duo beat out incumbent starters Zion Nelson and Jakai Clark for their positions.

Can Campbell and Traore help fix an offensive line that gave up 51 sacks in 2019? New offensive line coach Garin Justice obviously has confidence in these two players to help improve the unit.

Campbell and Traore likely won’t be physically overmatched by a smaller UAB defensive line but it is important that Miami’s offensive line capitalizes on tonight’s game to gel as a unit before diving into the ACC schedule later in September.

What is worth keeping an eye on here is how many other UM wide receivers earn snaps against UAB.

New offensive coordinator Rhett Lashlee’s spread offense is fast-paced and that often can lead to additional substitutions to keep players on the field fresh.

How deep will Miami go on the depth chart at wide receiver?

Michael Redding III, Marshall Few and Jeremiah Payton are listed as the backup receivers at each position. How much will we see them? Will true freshmen Dazalin Worsham, Xavier Restrepo or Keyshawn Smith get reps?

No matter who is on the field at wide receiver, Hurricanes quarterback D’Eriq King said Tuesday that he feels confident connecting with them.

“We have a lot of great players on offense and a lot of guys who can make plays,” King said. “I’ve seen a lot of guys make plays…I’ve just got to get those guys the ball and let them do what they do.”