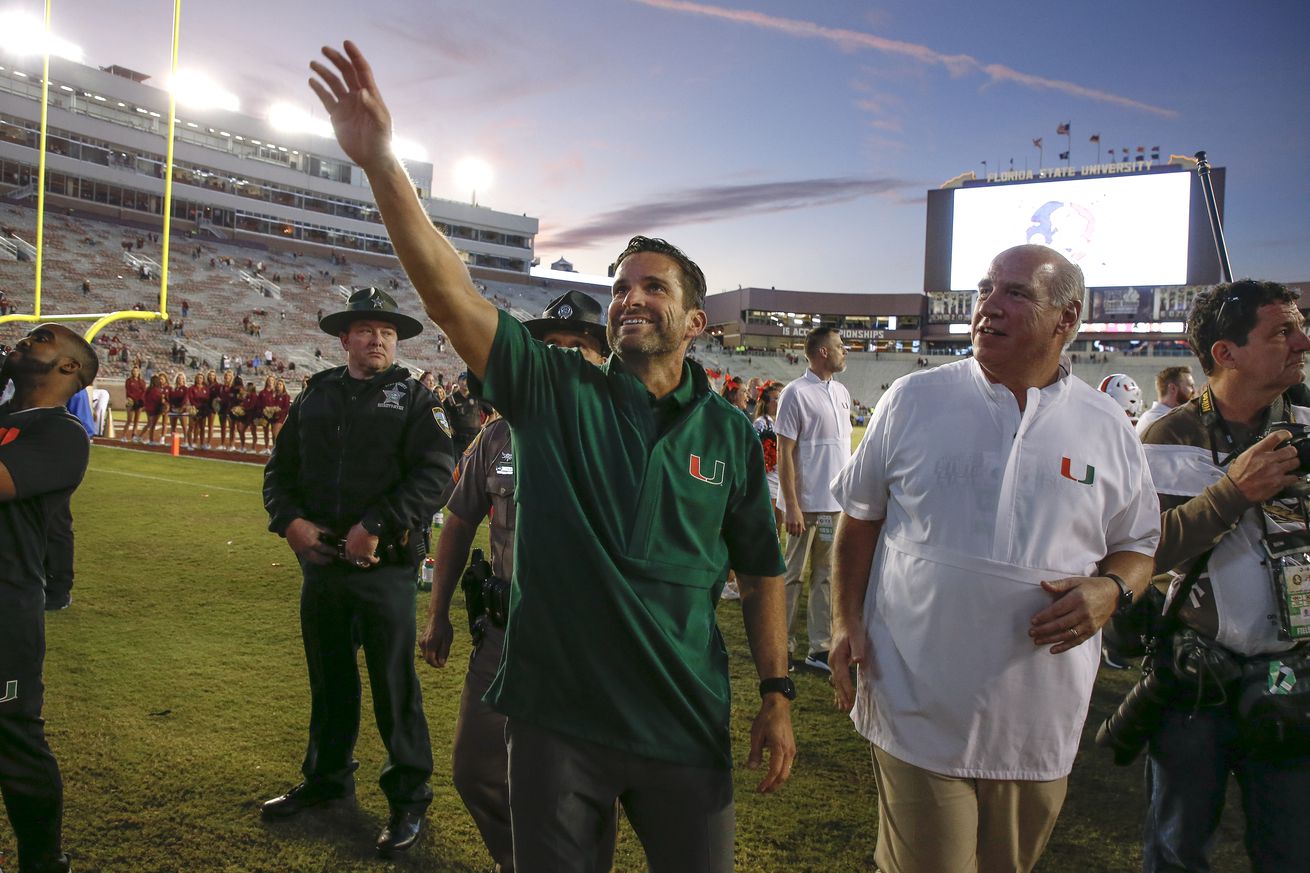 Miami is 2-0 after two double-digit victories to begin the 2020 season.

With rival Florida State set to invade Hard Rock Stadium tonight at 7:30pm, here are three areas of the game to keep an eye on while you enjoy your watch party.

Miami mauled Florida State 27-10 in 2019 largely because Florida State’s offensive line could not block the Hurricanes hardly at all.

That makes the matchup between Miami’s defensive line and Florida State’s offensive line the most important one of the game tonight.

If the Hurricanes control the line of scrimmage again while FSU is offense, the Seminoles won’t be able to score enough points to beat Miami. It’s really that simple.

If Miami struggles to get pressure on FSU quarterback James Blackman or create a push to control the Seminole running attack, FSU will have a legitimate chance at the upset tonight.

While you can never tell exactly how two opposing lines will matchup prior to the game beginning, looking at FSU’s performance against Georgia Tech might clue us in to how Miami’s penetration will look tonight.

The Yellow Jackets held Florida State to 3.1 yards per carry two weeks ago while earning six tackles for a loss and three sacks. Georgia Tech was projected by many to have one of the worst defensive lines in the ACC this season.

As you probably know, Miami has been projected by many to have one of the best defensive lines in the ACC this season with defensive ends Jaelan Phillips and Quincy Roche leading the way.

That does not seem to bode well for Florida State’s chances of blocking Miami effectively tonight.

FSU’s quarterback situation has been talked about far less this week than I would have anticipated after watching Blackman play against Georgia Tech.

To put it nicely, there is very little evidence that Blackman is an effective college quarterback. He has thrown 24 interceptions in 28 college games and is not a particularly elusive runner or scrambler.

The Seminoles have Blackman listed as the starting quarterback for tonight’s game but don’t be surprised at all to see one, two or even three other players take snaps from center for FSU tonight.

The first option? Louisville transfer Jordan Travis. Travis only took a few snaps against the Yellow Jackets two weeks ago but rushed for 39 yards on six carries while going 0-for-1 throwing the ball. Travis is an elite runner but a subpar passer.

Second? Jashaun Corbin in the Wildcat formation. Corbin took snaps from under center multiple times against Georgia Tech, including a key fourth down in the second half. Corbin takes snaps from center when Florida State wants to utilize its power run game. Corbin won’t be passing the ball unless it’s a trick play.

The long shot option? True freshman Tate Rodemaker from Valdosta (Ga.) High. Rodemaker has never taken a college snap but enrolled at FSU in January to learn the new Seminole offense. It is extremely unlikely that the former three-star recruit on 247sports.com plays against Miami but he is actually listed as the co-backup on FSU’s depth chart with Travis.

Each of those options brings something different to the table for Florida State but none of those players is particularly intimidating to play a whole game against.

Just don’t be surprised if FSU has at least two different players take snaps from center against Miami tonight.

You could make an argument that Florida State’s best position group matches up directly with Miami’s worst thus far this season.

There is no doubt that FSU has a solid group of defensive backs this season. Led by Asante Samuel Jr., the Seminoles have multiple future NFL players in their defensive backfield.

Has wide receiver been Miami’s worst position through two games? Some would say yes.

The Hurricanes have had issues with dropped passes and minimal yards after the catch thus far. They’ve had much more success throwing the ball to tight ends Will Mallory and Brevin Jordan or running backs Cam’ron Harris or Jaylan Knighton than most of the wide receivers.

Miami needs its wide receivers to hang onto the football tonight and break tackles after securing the catch.

Look for Florida State to trust its defensive backs in coverage against Miami and use players in its front seven to try and pressure King or contain him to keep him from running.