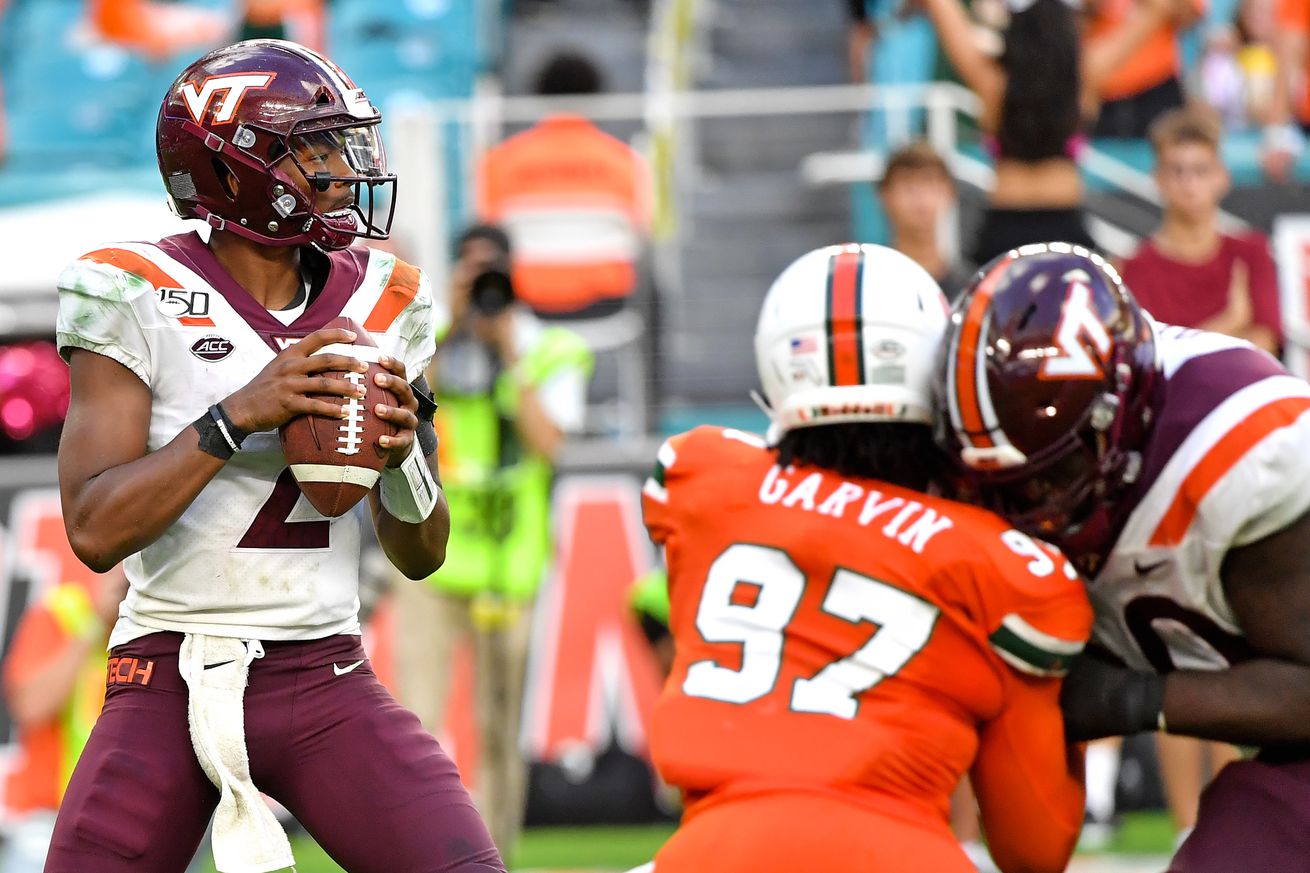 The Miami Hurricanes will face another tough ACC road test today when they take on Virginia Tech in Blacksburg at noon.

The Hurricanes have won three consecutive games and sit alone in third place in the ACC. Virginia Tech sits alone in fifth place.

Despite being ranked No.9 in the AP Poll, Miami is a slight underdog today against the Hokies. The Hurricanes had been double digit favorites in three consecutive games and have only not been favored at kickoff in their loss to Clemson this season.

Here are three things to keep an eye on during today’s game.

How well will the Hurricanes do against the Virginia Tech rushing attack?

The Hokies have the No.5 ranked rushing offense in the NCAA this season, thanks in large part to quarterback Hendon Hooker. Virginia tech averages just over 277 rushing yards per game.

Hurricanes fans might remember Hooker from his first collegiate start at Hard Rock Stadium in 2019. He passed for 184 yards, rushed for 76 more, and accumulated four touchdowns in Virginia Tech’s 42-35 victory over the Hurricanes.

The game was one of the worst defensive performances in the Manny Diaz era.

Hooker is averaging 103 rushing yards per game in 2020 and has eight rushing touchdowns in five games. Miami has not faced a quarterback as athletic as Hooker this season.

Regardless of whether or not starting running back Khalil Herbert (hamstring) plays today, Miami needs to be prepared for Hooker and this Hokie rushing attack. It seems that Miami has traditionally struggled to defend dual-threat quarterbacks and Hooker presents a serious challenge for Miami’s linebackers and entire defense for that matter.

Virginia Tech will go as Hooker goes today. Miami must make him as uncomfortable as possible and capitalize on any mistake he makes.

How will Miami take advantage of a subpar Hokie defense?

Looking at these two teams’ last performances, it would seem the Hurricanes should have a huge advantage when they have the ball.

Miami compiled 620 yards of offense in its come-from-behind 44-41 victory over North Carolina State. Virginia Tech allowed 466 yards of total offense in its last-second 38-35 loss to Liberty.

Liberty’s athletic quarterback Malik Willis gave the Hokies trouble. Willis passed for 217 yards and three touchdowns and rushed for 108 yards and another touchdown.

Willis’ numbers should have D’Eriq King and the Hurricane offense intrigued. King got the passing game going against the Wolfpack last week as he passed for 430 yards and five touchdowns.

Miami should see today’s game as another opportunity for King and the wide receivers to excel. If Miami’s offensive line holds up in pass protection like it did last week, the Hurricanes will have plenty of opportunities in the passing game today.

As has been discussed in this space previously, Miami has an elite special teams unit in 2020. Kicker Jose Borregales and punter Lou Hedley have been outstanding in their roles.

The special teams unit finally let the Hurricanes down a bit last week when it surrendered a kick return touchdown to North Carolina State.

In order to win as an underdog on the road, Miami cannot have a major special teams gaff like it did last week.

There’s no reason to expect anything less of Borregales (13-for-14 on field goals with the lone miss being blocked) and Hedley (46.3 yards per punt) today. The Hurricanes will need to be better covering kicks (or get more touchbacks out of Borregales) to keep the Hokie offense in poor starting field position.

Additionally, can this be the week that Miami finally gets something out of its punt return unit? The Hurricanes have rotated Gurvan Hall, Mark Pope and Xavier Restrepo through punt return duties in their first seven games of the season but Miami has just 36 punt return yards in seven games.

Maybe this will be the week that the Hurricanes can spring a big return and change the game with their punt return unit.