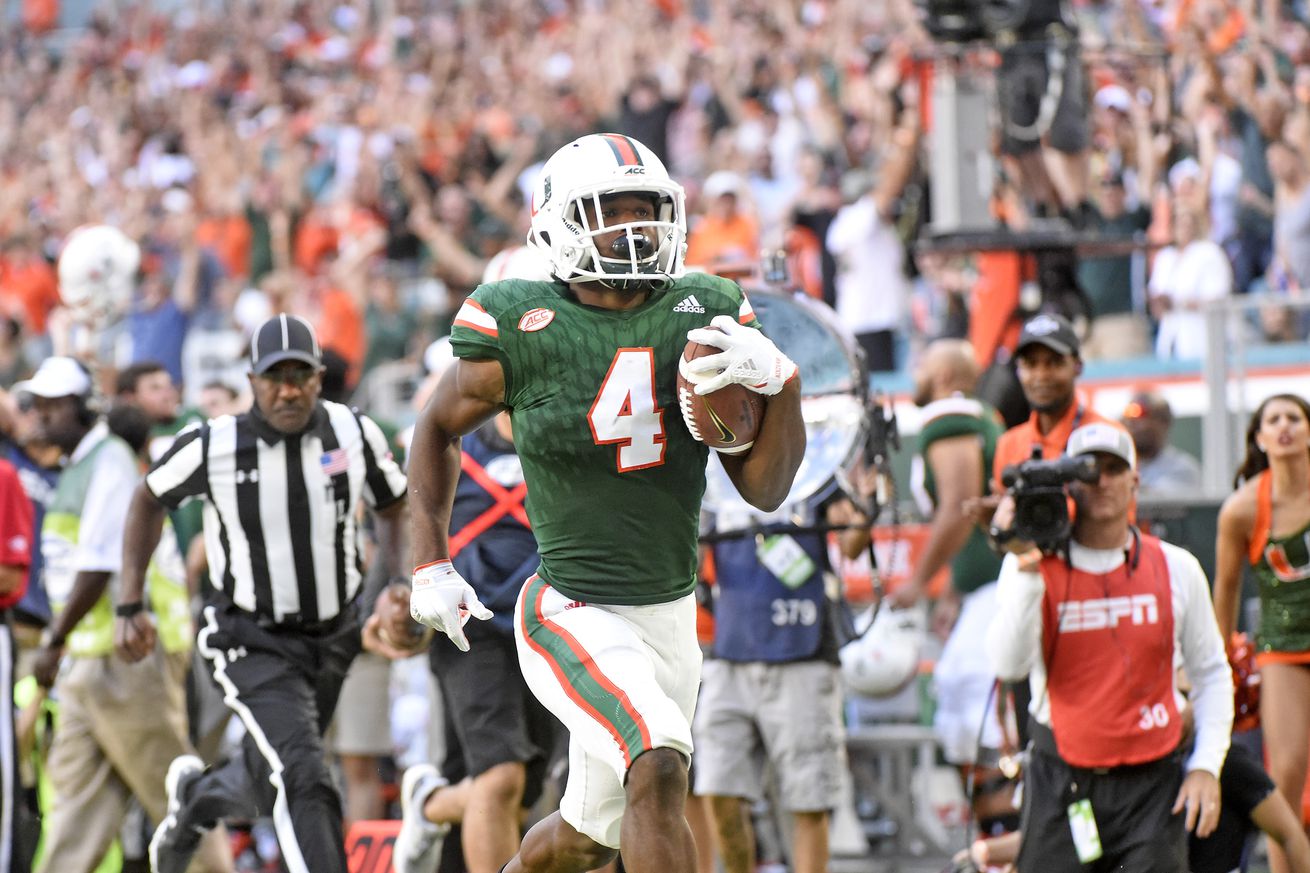 There are times as sports fans where we find ourselves thinking about old times, it happens everyday for me, without a doubt. As a Hurricanes fan, several times a day I’m daydreaming and thinking about how great Jacory Harris was against FSU in 2009, or Devin Hester’s punt return against Louisville in 2004.

I also think about the 2017 season quite often, the 10-0 start that put the Hurricanes back on center stage in college football, even it was just for a brief moment. There was a three week stretch from that season that epitomized that year for Miami, but we’ll get to that in a minute.

That entire fall was magical for the Canes. The first unforgettable moment was Malik Rosier and Darrell Langham connecting for a game-winning touchdown against the Seminoles in Tallahassee, ending a brutal 7-year losing streak to FSU.

And the knockout punch. Rosier tosses it up to the closer, Darrell Langham. Canes get the W.

Say what you want about the man’s career, but you can never take this moment away from him. 7 game FSU win streak is over, just like that. pic.twitter.com/dbmu0N4wzL

Langham’s heroics were needed the next week against Georgia Tech, as well. A close victory against Syracuse the ensuing Saturday followed, and Miami was sitting at 6-0. Then, a sluggish 24-19 win over previous 1-7 UNC the next week raised many questions about whether the Hurricanes were overrated, especially with Virginia Tech coming into town seven days later, and Notre Dame after that.

Would this Miami team rise to the occasion, or falter like past UM squads?

November founds its way to South Florida, just in time for a Saturday night showdown featuring unbeaten and #9 Miami, against their ACC Coastal rivals, 7-1 and ranked #13 Virginia Tech. Chris Fowler and Kirk Herbstreit were the broadcasting duo, and Mark Richt’s team entered a rarely sold out Hard Rock Stadium, wearing their blackout jerseys for the first time.

A scoreless first quarter was highlighted by defense and Miami’s inability to score down near the goal-line. However, the Canes finally were able to find the end zone in the second quarter and struck first, as Rosier found his favorite target, Braxton Berrios for the touchdown.

Early on, this night definitely felt different for the Hurricanes compared to the past several years, and it was led by Miami’s incredible play on defense. The Canes D harassed Hokies quarterback Josh Jackson all night long, sending blitzes from all angles. A long Travis Homer touchdown run put the Hurricanes up 14-0, and you thought that Miami might be in for a cakewalk against Tech.

Still, any Miami fan should know, whenever these two teams get together, it’ll always be close. That’s when the leader of the Canes defense, safety Jaquan Johnson, stepped up and delivered, twice.

The first big play Johnson made came with less than a minute to go before halftime. Virginia Tech was driving, now down 14-3 and deep in UM territory. A screen pass to receiver Sean Savoy looked promising for the Hokies, until a hit by Jaquan popped the ball onto the ground. Miami defensive lineman R.J. McIntosh recovered and rumbled down the sideline, squashing a Tech scoring opportunity. The Canes faithful in the stands, dressed in black, erupted as the Turnover Chain finally came out.

The second play from Johnson came in the third quarter. A touchdown pass from Rosier to tight end Chris Herndon put Miami up 21-10, but the Hokies were threatening once again. Inside the UM 40-yard line, Va Tech decided to go for it on a 4th-and-3. Johnson stepped up big, making an incredible one-handed interception, sniffing out another Hokie drive.

Jaquan was one of the biggest playmakers on defense that Miami’s had in the last 15 years. pic.twitter.com/BhDN2EI4Bf

Although Rosier threw three interceptions on the night, he did enough for his team to win, as he tossed two touchdowns through the air and ran one in himself, en-route to a 28-10 Hurricanes win.

#Canes Malik Rosier bounces back with an incredible throw and a monster run for a touchdown. #TurnOverChain #TouchdownCrown pic.twitter.com/BJfjTGalPE

As the game was ending and it was clear UM was going to win, it was announced that College Gameday would be in Miami the following weekend for the Hurricanes matchup against #3 Notre Dame. The Canes rose to #7 in the polls following the victory, as did the hype surrounding the program, and the city.

For the first time in more than a decade, we’re headed to The U!

As each day went by that week, the anticipation grew.

Finally, the day came. College Gameday’s show on Miami’s campus was electric, as Alex Rodriguez came by the set, and all was leading up to the Hurricanes and Fighting Irish being back on primetime TV once again.

Miami sports fans have a reputation of not showing up to a game until the second quarter. This wasn’t the case this night. Hard Rock Stadium was completely filled as the Canes took the field to a raucous crowd that hadn’t been seen or heard at a UM game since the days of the Orange Bowl.

Place isn’t even half full yet and it is pretty darn loud here https://t.co/muVSpdKW0i

All of the country was tuned in. I was watching from my family’s home in Utah. Cancelled all my plans with friends that night, nothing was bigger than this game. My father made gumbo, brother had his pregame lucky sunflower seeds, we were ready. I must admit, I didn’t go into that night thinking the Canes would win, I was fully expecting to be let down like I had so many times before.

I don’t really have to go into detail about what happened this night. It was so magical, so surreal, that anyway I try and break it down, it won’t even come close to doing it justice.

It all started with another touchdown pass from Rosier to Berrios in the first quarter, with Braxton doing his famous “convict” celebration after the score. A Jaquan Johnson interception sent the 65,000-plus into even more a frenzy, as the Turnover Chain made its first (but not last) appearance of the night.

Now up 14-0, Kirk Herbstreit famously said that he had never heard anything louder than Hard Rock Stadium at that moment. A quote that us Miami fans are happy to bring up anytime we can.

Fast-forward to the closing moments of the second quarter. Miami is up 20-0, but the Irish are in UM territory. Enter Trajan Bandy. I love the iconic words by Chris Fowler, “Trajan Bandy the true freshman….break out the chain again!” That play resulted in one of the three noise complaints my house received that night.

The Canes would go on to humiliate #3 Notre Dame 41-8. No, we weren’t dreaming. This was real. Miami was back. The U was back. And before next week came, we climbed up to the #2 spot in college football.

Still, the following game scared me. With all the emotion that came from the previous two weeks, a noon kickoff against 6-4 Virginia just seemed like a trap game. It began that way too, as Miami fell behind 14-0 in the first quarter, and then down 28-14 early in the third.

A Lawrence Cager touchdown reception from Rosier made it 28-21, and another jam-packed Hard Rock Stadium came alive once more, cheering on their defense to make a play. And they did, as Jaquan Johnson stepped up yet again.

Jaquan Johnson will always be one of my favorite Hurricanes. He made so many big time plays, like his pick six against UVA in 2017 pic.twitter.com/F1PYJvonMR

Jaquan Johnson is another guy like Berrios, so beloved by Canes fans. #4 always had a knack for making big plays. His pick six vs UVA, one of my favorite plays in recent memory pic.twitter.com/ABIfZO3ZeA

Johnson’s pick-six was just part of Miami’s ferocious second half assault on the Cavaliers. The Canes defense and especially their pass-rush was getting to the quarterback on almost every play, and the running of Travis Homer wrapped up the 44-28 win on senior day for Miami.

Travis Homer is another one of my favorite Hurricanes. Throwback football player. One of the toughest RB’s to come through Miami pic.twitter.com/zOYiJgQZ1D

Though the winning streak ended the following week against Pitt, and 2017 ended on a bad note, those first 10 games and especially those three weeks in November was the stuff of legends. For the first time since perhaps the mid-2000’s, the Hurricanes were once again the talk of college football. Miami dominated in primetime games, and that little taste of the good old days, just made fans hungry for UM’s next run for greatness.