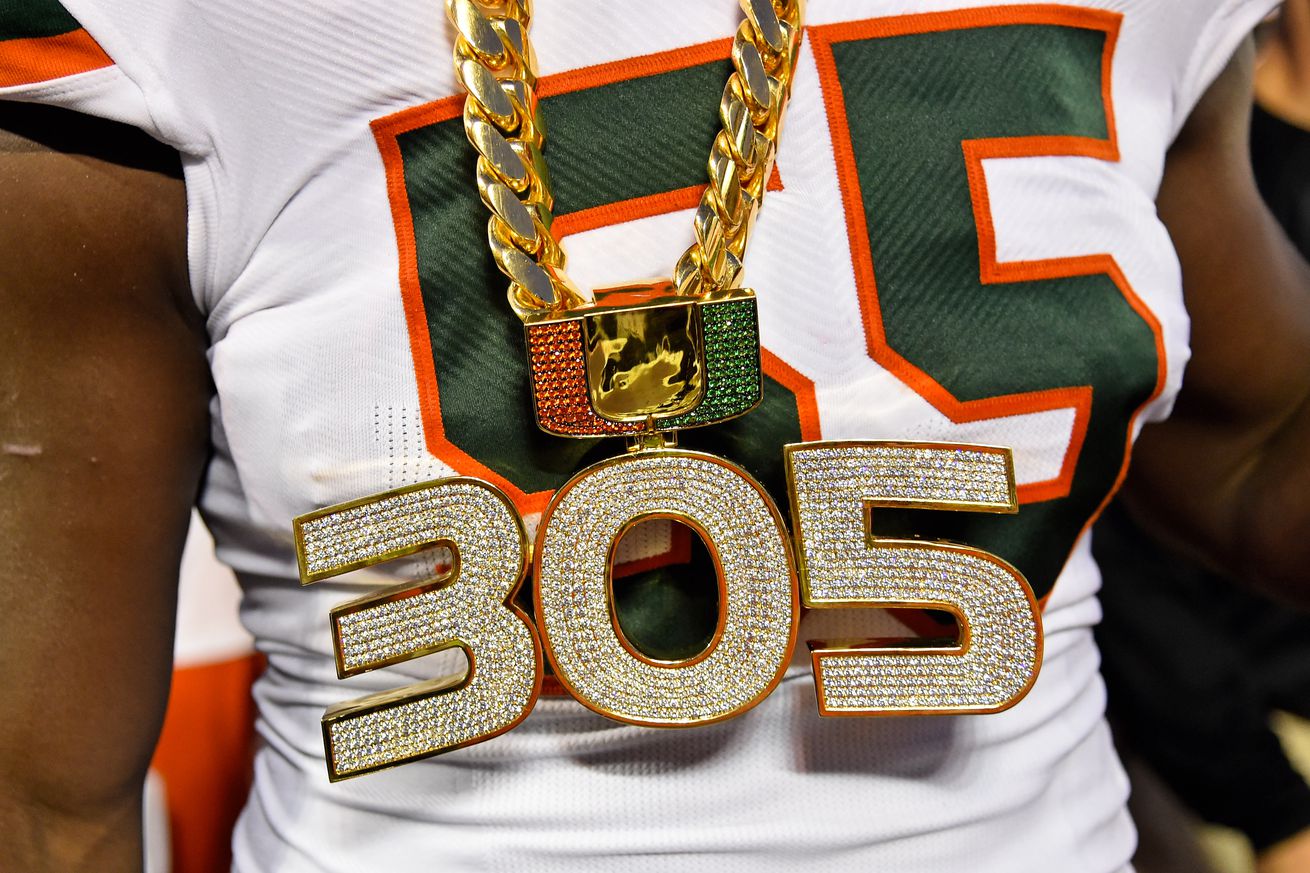 A new Turnover Chain this fall? It’s a recurring question from so many across Hurricanes’ nation every August prior to a fresh season and another chance for a return to a New Year’s Six bowl game. The football program has sifted through various design ideas, but like every year there can only be one.

The Miami Hurricanes football program has cranked out a dazzling, prestigious new Turnover Chain at the season’s start since 2017. And the equivalence of a new season and a fresh design has become an at-large norm at The U.

Whether it be the “U” logo itself, the Sebastian emblem, or the “305” design, the classic icon has helped redefine the program’s culture towards the back half of the decade. That remains something that likely will not fade anytime in the near future.

Viewed as beyond a reward for defensive prowess and execution, the dense, golden Cuban link necklace has become one of the university’s firmly established status symbols that continues to reinvent itself every fall. New design ideas have kept the ‘Canes, their coaches, administrators, and the entire fanbase on their toes annually regarding the chain’s updated swagger.

“In Miami, what are we famous for? We’re famous for Cuban chains,” Turnover Chain jeweler AJ Machado (a.k.a. “King of Bling” and “AJ The Jeweler”) said. “So we did a big U charm—orange stones, green stones in there to flash it out.” The distinctive planning process was formulated back before Miami’s 2017 campaign that ended with an Orange Bowl loss.

But that was only for the first edition of the chain after former Miami defensive coordinator Manny Diaz (now head coach) had wanted to drive his crew to a new level and bring back “The U” that had historically tormented the college football world.

It’s been a question that begs the attention of all—what will the fourth edition of the Turnover Chain resemble? The school’s primary icons have already been utilized, but what could surprise many, if not all, across Hurricanes nation is if the five-time champion program could reinvent an original design of the chain.

Perhaps the renowned “U” logo could get a “The” right next to it, combining a term that is so often referred to by the modern college football world. AJ The Jeweler himself has already crafted the original Turnover Chain and adding a short word in the same Hurricanes font used in the “305” edition from last season would serve as a unique classic.

What the ‘Canes and their followers should remember is the theme of restriction that has haunted the nation’s sports landscape in 2020. Should Hard Rock Stadium either maintain a 13,000-fan limited capacity or prohibit fans from attending other games, the genuine feeling of hoisting the Turnover Chain in front of tens of thousands will not come to pass this fall.

The same goes for the college football environments that will either minimize how many supporters enter their respective buildings or restrict them entirely. Intercepting a pass out of nowhere or digging deep for a fumble recovery on a boiling Saturday afternoon will have less that follows live from the crowd’s end. The crowd noise at 347 Don Shula Drive in Miami Gardens, Fla. will be of no match to the energy that was felt and cherished at a game like when Miami hosted and defeated a No. 20 Virginia team last October.

An atmosphere of passion, hard work, and excitement will be sorely missed this season with solely 13,000 fans filling the stadium’s teal seats. Not to mention the sense of spontaneous awe that accompanies seeing a defensive back or linebacker shine under the brightest lights against a program like the Gators’ or Seminoles’, for instance.

Forcing more turnovers this fall has been a bar to reach for defensive coordinator Blake Baker and his unit, given the plethora of potential exhibited in scrimmages since June. Hopefully the same level of such excitement can translate to living rooms across Florida and the rest of the country while the ‘Canes battle for a far more prominent campaign.