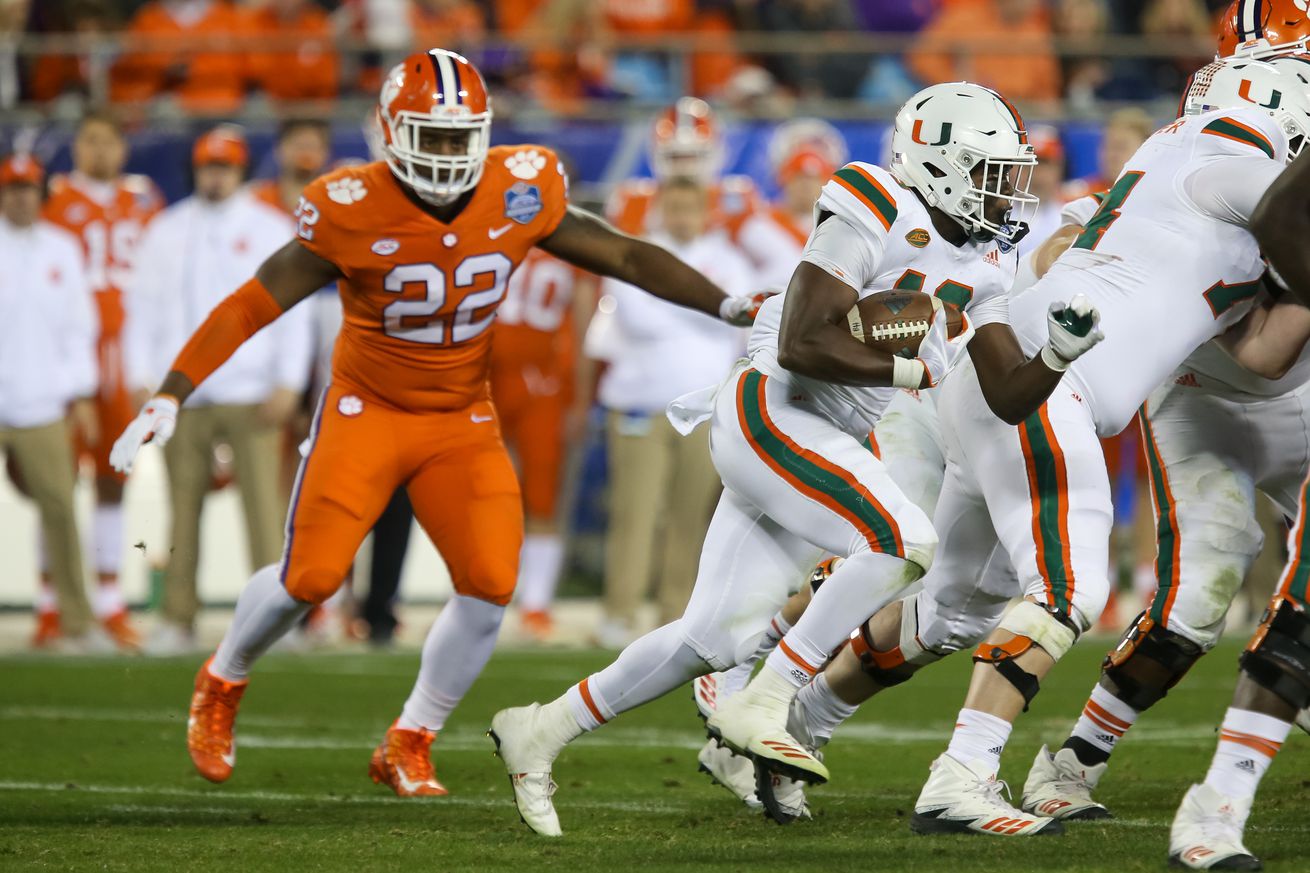 Even ranked #8 in the country right now, the Hurricanes will need to play a near flawless game if they plan on pulling off an upset against number-one ranked Clemson next Saturday. A program like the Tigers, the elite of college football, typically don’t have many weaknesses or concerns on their team.

This years Tigers team has two areas where the Hurricanes can do damage, and will need to do so if they have any shot at winning on Saturday.

The first one of these weak areas is the Clemson offensive line, which had to replace four starters from last season. Against UVA last night, the Tigers o-line received criticism, and quarterback Trevor Lawrence completed just 2-of-9 passes when under pressure. Though, if you give Lawrence time to throw, he can put the football anywhere on the field, completing over 70% of his passes so far this year, and he hasn’t thrown an interception yet.

Miami’s defensive line is one of the bright spots of the team, and is considered to be one of the top units in college football. Jaelan Phillips, Quincy Roche and Nesta Jade Silvera will have to get through their blocks, and make it so Lawrence is under pressure all night.

“They’re a young (offensive) line. They’ve got one starter returning, so we should be able to capitalize on that,” says Wake Forest DL Boogie Basham.
Here’s more Wake Forest analysis of #Clemson football https://t.co/x27MUL0Um8 pic.twitter.com/qtGmBBEgYM

The other key in the Canes working on the Clemson offensive line, they’ll have to contain Travis Etienne, the best running back in the country. Last night, Etienne rushed for 73 yards and a touchdown, while also catching 5 passes for 114 yards. If you want to stop the Tigers offense, you have to slow down either Etienne or Lawrence, because I don’t think you can do both, they’re just too good. Take away the run game early, then focus on getting to the quarterback.

The Hurricanes totaled 6 sacks against FSU, though the Clemson o-line won’t nearly be as bad as the Seminoles protection. Still, this is the way you slow down the high-powered Clemson offense, take advantage of their young offensive line and create constant pressure.

Wasn’t going to tweet but we’re seeing Clemson having to get cute/creative to move the ball since the offensive line is losing.

Youth showing on the defensive front as well, UVA having their way in the lines of scrimmage

Second weakness on the Tigers team, is the secondary. Similar to the offensive line, Clemson lost several starters from the secondary from the 2019 season. Even so, the secondary is looked at, at least so far, as perhaps the biggest weakness that Clemson has this year.

Against the Cavaliers, UVA was able to pass for 270 yards, and scrambled for another 90 yards. They moved the ball well, and if Virginia didn’t turn the ball over 3 times, the game may have been a little closer than 41-23.

#Clemson DC Brent Venables says nothing that UVA QB Brennan Armstrong did surprised them. He still threw for 270 yds & 3 TD’s, and rushed for 89 yds. Venables says Clemson will have to patch up some holes on defense before they face Miami. @foxcarolinanews

For the Hurricanes looking at Clemson’s secondary and pass coverage, one of the biggest things they’ll try and do is line up tight ends Brevin Jordan and Will Mallory against the Tigers linebackers or safeties, creating mismatches. Clemson also had trouble in zone coverage against Virginia, and besides Andrew Booth at cornerback, the Tigers don’t really have anyone else to fear in the secondary.

The Clemson defense that showed up tonight against Virginia better not show up against Miami next week.

This aspect all comes down to QB D’Eriq King, in his passing ability and skills running the ball. Against a team like Clemson, you don’t have too many areas where you can attack on offense, but for the Canes it’s in the air game. Not just Jordan and Mallory, but receiver Dee Wiggins has the chance to have a big night on Saturday if he can get open.

Defense needs some work. Brent’s on it

If King has time in the pocket, he has the talent to pick apart the Tigers pass defense. Jordan and Mallory have to be the go-to targets, and get them involved early. Have Clemson so focused on trying to cover the tight ends, that they forget about a guy like Mark Pope or Jaylan Knighton out of the backfield.

Awful sequence by Elliott and the offense and then what in the world. Zanders had whiffed twice now. Looking like a liability. Not great.

When it comes to Clemson’s offensive line and secondary, Manny Diaz and his staff must put together a gameplan where they can capitalize on both of those areas. I’m not saying that these two things will give Miami the win, but it’ll give them a chance. How the Hurricanes come out and play against the Tigers, especially with two weeks off, will tell a lot about the Miami coaching staff.