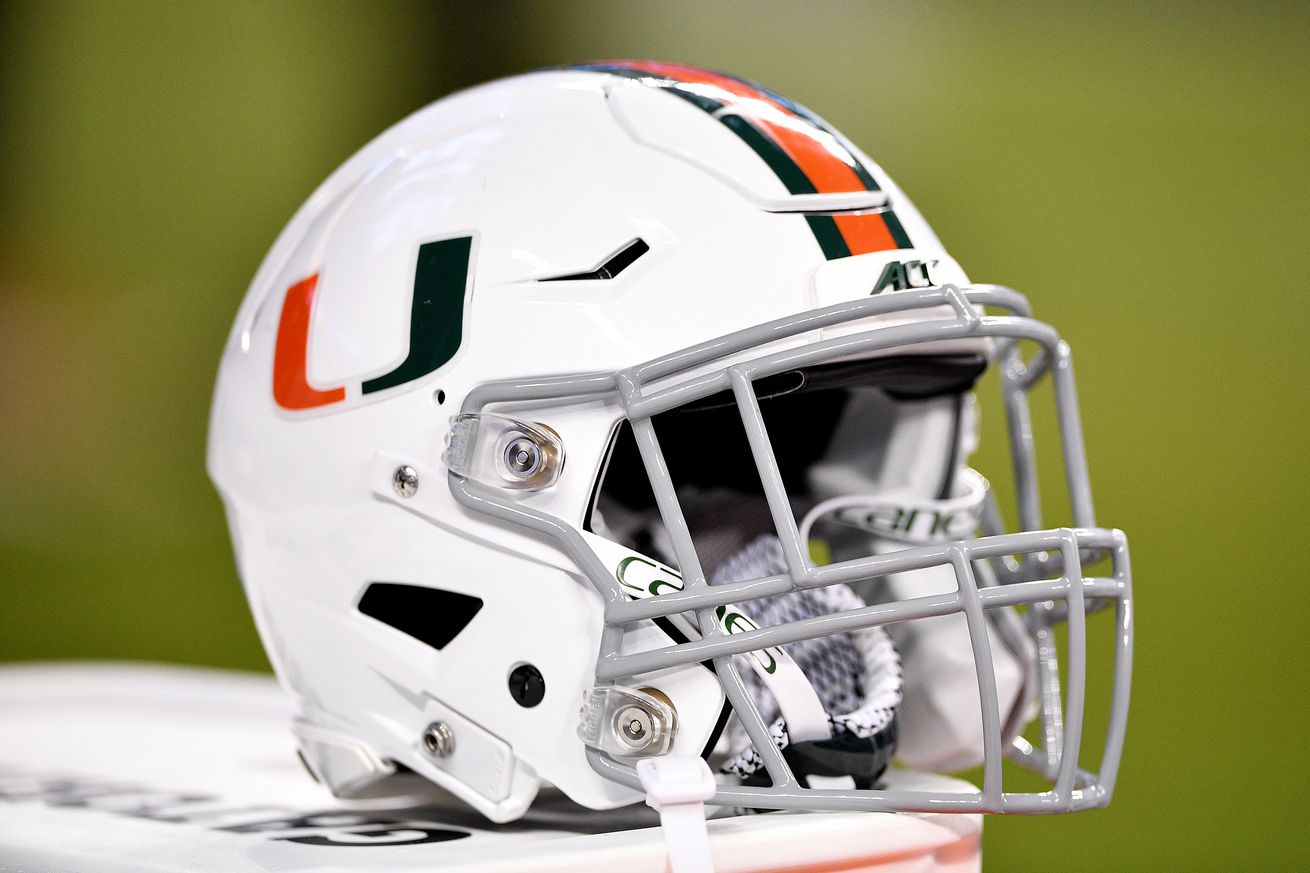 The wait is over. How will Miami’s new-look offense do against a veteran UAB squad?

The wait is finally over, it’s time to play some football. After more than 8 months, the 2020 Miami Hurricanes season begins tomorrow night, as the UAB Blazers come into Hard Rock Stadium. For Manny Diaz, he heads into his second year as head coach for UM with high expectations, after going 6-7 in his first season.

The Blazers already played their first game of 2020, with a 45-35 home win over Central Arkansas last week. Fourth year head coach Bill Clark has done a fine job with this program, considering UAB shut down the football team for two seasons in 2015 and 2016.

Last year, the Blazers posted a 9-5 record, and appeared in the C-USA championship game for the second consecutive season. They lost in that game to FAU, before falling to Appalachian State in the New Orleans Bowl.

Don’t let the C-USA header fool you, the Blazers are no pushover whatsoever, and if Miami doesn’t come out swinging, it could be a lot closer than people anticipate.

Central Arkansas at UAB about to kick off on ESPN3.

On offense, the Blazers are led by quarterback Tyler Johnston, who struggled at times against Central Arkansas and had some injuries come up, but still went 17-for-25 passing, for 143 yards and 2 touchdowns.

*Starter for UAB 2019 & end of 2018. Battled some injuries in 2019
*Big play ability, 33tot tds last 2 seasons, can chunk it down field
*Ability to use his legs helps make creative plays successful⬇️@BlazerTalk @F5DailyDragon pic.twitter.com/CyiE2hZ5jE

Johnston also threw an interception. Johnston has talent, but can easily be forced into making mistakes, and capitalizing on those mistakes will be big Miami’s secondary. The Hurricanes trio at safety, Bubba Bolden, Amari Carter and Gurvan Hall Jr. will have their chance to snag an interception, if you ask me.

UAB quarterback Tyler Johnston III with a poor throw and an interception near the end of the 1Q. He needed to clean that up in the offseason. Not a good sign early for the Blazers. Johnston threw 15 INTs last year (tied for third nationally). UCA converts into TD. UAB 14, UCA 7.

The real big name to know for the Blazers on offense is running-back Spencer Brown, who is the all-time leading rusher at UAB. Last week, Brown, who dropped 20 pounds in the offseason, rushed for 127 yards and a touchdown, averaging over 5 yards per carry.

“You haven’t seen this version of him. He is on a mission.”
-UAB Head Coach Bill Clark on RB Spencer Brown, Brown is one of just two players in the nation to enter the season with 3,000+ career rushing yards@UAB_FB@CoachBillClark @JOXRoundtable #GoBlazers pic.twitter.com/fMksAXbozT

Brown is a bigger running back, and it’ll be critical for linebackers Zach McCloud and Bradley Jennings Jr. to bring him down when they have the chance.

Brown is a tough runner that doesn’t go down easily. Not an elite athlete but the defense needs to wrap up and swarm. Had 85 yards after contact against UCA. pic.twitter.com/YkgbIYEHMo

Though, Brown isn’t the only talented ball-carrier on UAB. Jermaine Brown isn’t as big as Spencer, but is effective nonetheless. Against UCA, Jermaine rushed for 75 yards and 1 touchdown, on 15 carries.

UAB has a very good group of running backs.

Stopping the run will be the main goal for Miami’s defense, which means DT’s Nesta Jade Silvera and Jonathan Ford will need to plug the middle all night long.

Jermaine Brown breaks OUT for a 30-yard UAB TD pic.twitter.com/jWANPpXrny

UAB has a legit threat at wide receiver too, junior Austin Watkins. Watkins was named to the Bilentikoff Award preseason watch list, and versus Central Arkansas, he totaled 7 catches for 72 yards. This is going to be a very interesting matchup on Thursday, and a test for Miami’s secondary, if cornerbacks Al Blades Jr. and DJ Ivey can shut-down the productive receiver.

The article is dropping tomorrow but prospects to watch tonight:

Austin Watkins Jr, WR, UAB. He recorded 1,092 yards last season, becoming just the 3rd player in program history to have 1,000 yards in a season. Electric with the ball in his hands. 4.47 guy. pic.twitter.com/1I1fVui1pT

The Blazers held the ball for over 35 minutes against Central Arkansas, and with D’Eriq King on the other sideline for Miami, you better believe UAB is going to try and control the time of possession on Thursday night.

For the Hurricanes offense, Thursday night will be the long-awaited UM debut of new offensive coordinator Rhett Lashlee, who comes to Coral Gables after two very successful years as OC for SMU. It’ll also be the first game for quarterback D’Eriq King in a Miami uniform, as the duo of him and Lashlee look to revive the Hurricanes offense.

No QB has averaged more yards after contact since 2018 than D’Eriq King.

Get your popcorn ready, Miami pic.twitter.com/vFHK1XRLQ2

In their first game, they go against a veteran UAB defense, that’s loaded with players who can disrupt the opposing offense. Don’t let 35 points by Central Arkansas fool you. The Blazers defense gave up less than 300 yards of total offense, but the 3 touchdowns they surrendered came off turnovers by the UAB offense and special teams.

Manny Diaz on UAB’s defense: “They’re going to make you earn everything.”

In 2019, UAB had the number-8 defense in the nation, allowing just 301 yards of offense and 21.6 points per game. Against Central Arkansas, the Blazers defense gave up 4.4 yards per play, forcing 3 turnovers and coming away with 2 sacks and 5 TFLs.

Coming off the edge, the Blazers have two exceptional pass-rushers in Jordan Smith and Alex Wright. Last year, Smith finished the season with 8 sacks and 14.5 TFLs, while Wright had 4.5 sacks and 8.5 TFLs as a freshman. Biggest question mark for the Hurricanes in these matchups, is how will tackles Jarrid Williams and John Campbell Jr. do against the Blazers talented pass-rushing duo?

Jordan Smith led @UAB_FB with 56 QB pressures a season ago, and he picked up where he left off on Thursday night pic.twitter.com/ZIWxFX6J6Z

UAB has a ton of talent defensively, and it starts with edge rusher Jordan Smith. Smith had 10 sacks as a sophomore and has great size at 6’7”. He’s a legit NFL talent and should have a big game tonight. Also sophomore Alex Wright is a rising star and a name to watch. #NFLDraft

Breakout season for Cam’ron Harris is on the way pic.twitter.com/0Lp3npRoce

Getting past the defensive line will be one for Miami’s rushing attack, but then they’ll have to deal with UAB middle linebacker Kristopher Moll, who is a native of Dads County. Last season, Moll finished his junior year with 102 tackles, 8 sacks and 15 TFLs. He led the Blazers with 8 tackles against Central Arkansas.

Looking at Moll, the Hurricanes will look to unleash their two-headed monster at tight end, juniors Brevin Jordan and Will Mallory. Lashlee loves to use TE’s in his offense, and they’ll definitely want to make it difficult for Moll in passing situations covering either Jordan or Mallory.

Will Mallory breakout season is getting closer and closer. TEU is returning with a vengeance pic.twitter.com/mVgPFPziU1

Thursday will also be a great first test for Miami’s wide receivers, as they’ll be paired up against talented UAB cornerbacks, Brontae Harris and TD Marshall. Mark Pope, Dee Wiggins and Mike Harley are the starting WR’s for the Hurricanes, as they look to use their speed to create separation, and come up with big plays.

And there’s a TD for TD!

TD Marshall snags the interception and takes it 76 yds for @UAB_FB! pic.twitter.com/LJOxwKvAiT

Lashlee’s offense is fast, faster than we’ve ever seen a Canes offense operate at. Averaging over 80 plays per game last year with SMU’s offense, Lashlee is going to have Miami running near that same amount, and their ability to wear-out this Blazers defense will be critical in getting a win.

I know many fans are expecting the new-look Miami offense to go out there and put up 50-plus points against UAB, but I don’t think we’re going to see that right off the bat in week one. First game of the season, you’ll always see plenty of sloppy play, and considering this is the first time the Hurricanes will be playing against an opponent in a new offensive scheme, there’s bound to be some bumps early on, and that’s ok.

Should be fun next Thursday when UAB goes to Miami. UAB’s defense will be an interesting test for the overhauled Miami offense w/D’Eriq King playing in Rhett Lashlee’s system. https://t.co/4uQjXNL8fz

The Hurricanes defense will be key on Thursday, and I see DE’s Quincy Roche and Jaelan Phillips having big nights, feasting on the Blazers offensive line. They’ll be big, and Miami needs to help them out by creating turnovers as well, getting the team energized with the new Turnover Chain.

This is one of the more anticipated seasons for the Hurricanes I can ever remember being a Miami fan, new OC, new quarterback, and the program is desperately trying to create new memories after a horrific 2019 season, and revise The U.

Manny Diaz, who has referred to this bowl game as a “bridge to 2020,” says what happened tonight can’t continue in 2020. pic.twitter.com/a3RhKGMyO2

The spread right now is Miami -13.5, and I’d be very surprised if the Hurricanes don’t cover. I do think it’ll be close in the first half, but the Canes all-around talent and depth at certain positions will be too much for the upstart Blazers to overcome.

Let’s get a nice win on Thursday, and get ready for a big game against Louisville next Saturday.