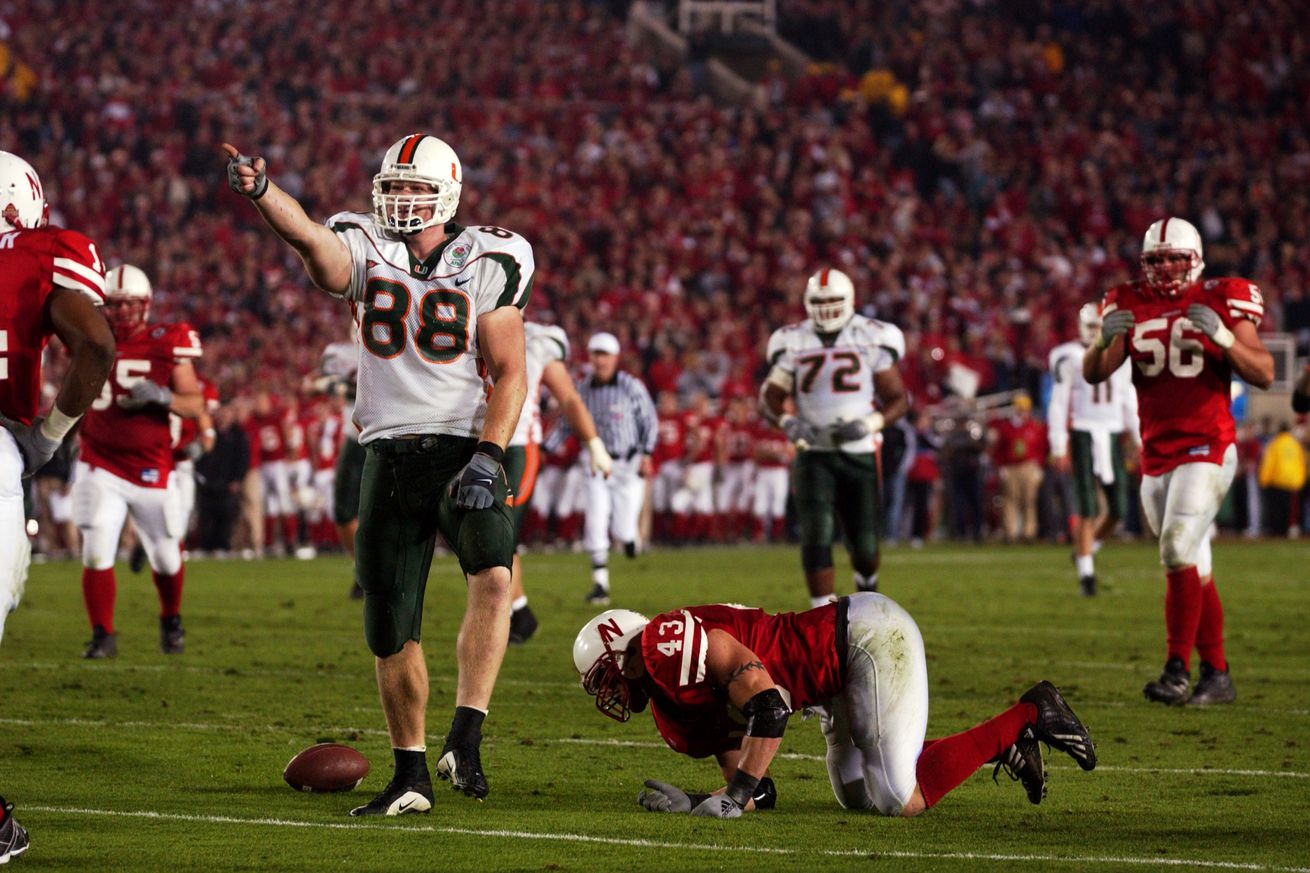 Tight ends, H-backs, and fullbacks have become synonymous for each other, but Miami is TE U. What are the college recruiters looking for at these positions?

Miami has been Tight End U or TE U for decades now. Even in the slump seasons of the past 15 years the ‘Canes have still produced NFL caliber tight ends. Dating all the way back to Glenn Dennison, Miami has focused on a pro style passing attack. In the 80’s it was Dennison, Willie Smith, and Alfredo Roberts. In the 90’s it was the underrated Coleman Bell, and Bubba Franks.

By the 2000’s the position caught fire. After Franks, Miami ran off names like Jeremy Shockey, Kellen Winslow II (just got the creeps typing his name), Jimmy Graham, Kevin Everett, Greg Olsen, and now Brevin Jordan. The TE/H position is a great way to add a gap in the run game while also having a receiving threat. Winslow was the star of the 2003 Fiesta Bowl for Miami. Shockey had the clutch TD catch against FSU in 2000. Dennison’s two touchdowns against Nebraska in the ‘84 Orange Bowl put the ‘Canes in the record books.

So what do coaches look for in TE’s, H’s and fullbacks?

Bruce Feldman’s book, Meat Market, has been the focus of these recruiting pieces thus far. However, the tight end position is hardly even mentioned in the entirety of the book. Thus, we’re going to re-tool and come from this in a different direction. One recruiting assistant’s evaluation sheet breaks down the tight end and h-back in different categories. You can tell from each that their program is looking for a tight end to be a more traditional player that can block inline and come out of a three point stance. An h-back for them, is more of a pass catching threat.

On tape at the tight end position, they’re looking for:

5- Release from block and initial quickness

Their #1 Critical Factor every TE must have? SIZE.

For h-backs, they’re looking for:

Their #1 Critical Factor every H must have? Production.

And for a fullback? They’re focused on a small list of items like toughness, mental awareness, blocking in the run and pass games, and hands. Hell, most schools are using walk-on’s to be their FB since they’re used so little in 2020.

If I’m looking at a TE and am focused on his blocking, that means I need to be focused on size. Getting these TE and HB guys on the scale and measuring tape is mandatory. Some schools don’t just get a player’s height, they also want to measure arm length and wingspan which make up the “length” college coaches want at every position. You want a frame that can develop and the long arms to extend on blocks and reach up and win 50-50 balls in the pass game.

40-yard dash: If I’m separating my TE’s and H’s, and my H needs to be a deep threat, I’m going to need to see some down line straight ahead speed from the H position. This is a good way to separate TE’s from H’s in the first place.

20-yard shuttle: Both positions put an emphasis on quickness, yards after catch, and route running. Those things come with an ability to accelerate quickly, or change directions and re-accelerate quickly. The 20 isn’t the best way to see that, but it’s a good way to see it face to face.

Vertical Jump: As I’ve said in previous recruiting pieces, the vertical is a great way to see the power in the quad and hamstring of your players. It’s a safe way to test the squat, and to see if a player can get up and catch a ball over a defender.

Broad Jump: While Orgeron and Ole Miss didn’t test the BJ, I would. If you’re looking for explosiveness in the power angles, the broad is the way to go. It’s a limited risk test to see if the player has the power in their ankles, knees, and hips.

Of course, for TE’s and H’s its going to come down to 1-on-1’s. They could be matched up against defensive backs or linebackers, but either way they’re going to have to show they can get separation in a drill that doesn’t favor their size because quickness is key in a 3 second press drill.

For fullbacks, I want to see them block in certain close quarter battle drills some camps put on. I would prefer any CQB work be done with medicine balls or shields but camps often get away with using less equipment than we do as high school coaches.

1. Length and size: Must have a wider girdle/hip frame. Must have length and growth potential. True inline Y (longer/wider) or more position flexibility/H (smaller/more athletic frame). FB can be larger power back converted to fullback.

2. Flexibility and Bend: Must have ability to bend in stance. Must have knee and ankle flexion, power angles. Cannot be a waist-bender.

4. Explosive qualities: Can he explode through his hips on contact? Does he have short area burst and acceleration? Can he stick his foot in the ground and generate power and quickness?

7. Ball Skills and hands: Natural hands catcher? Frames the ball and “plucks” away from his body? Strong hands in traffic/win contested catches? Ability to track the ball down the field?

8. Catch radius: Relates to length- can he go up and get it? Makes grabs outside of his body frame? High point ability?

10. Position flexibility: Ability to flex out and create mismatches as a WR, can be effective as a WR in red zone, has experience playing DE/LB and shows explosive tendencies.

What does this mean for Miami?

Miami is still landing top flight TE’s years after Dennison’s performance in front of a home crowd that shocked the world and Shockey’s big catch to upset FSU at the turn of the century. Brevin Jordan, Larry Hodges, Will Mallory, and Dominic Mammarelli are extremely athletic players at the TE/H/FB position.

Many college assistants feel that Jordan has the ability to go in the first or second round of the 2021 NFL Draft. Jordan’s issue will be proving he can stay healthy for an entire season after missing time in both ‘18 and ‘19. Will Mallory has proven to be a deep threat but he needs to show more consistency with his hands. Mammarelli is young but already has a college body at six-foot-four, 235 pounds.

Hodges is the jack-of-all-trades type who is shorter than the other three, and stockier. He’ll have to flash the ability to be versatile and line up in the backfield, as well as inline and winged.

Under Rhett Lashlee, Miami will be looking to put two tight ends on the field together, even if one is split wide or in the wing, while the other is in the backfield or inline. Lashlee’s philosophy of moving fast means players like Jordan, will need to be versatile athletically so they can line up all over the field.