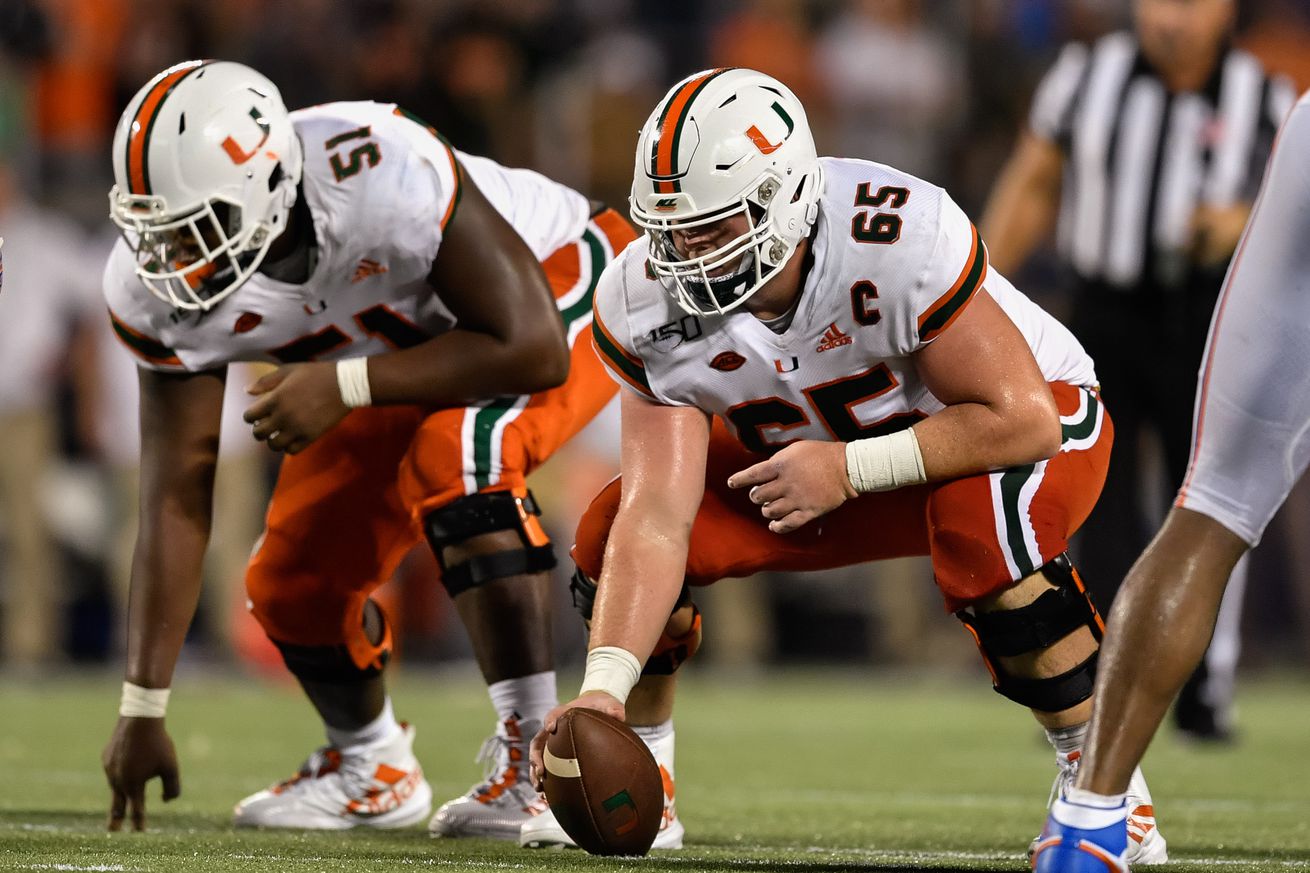 Less than two weeks before their first game, who will be starting on the offensive line for Miami?

We are now less than two weeks away from our Miami Hurricanes first game, and one of the biggest questions throughout the offseason has been, who is going to start on UM’s offensive line?

Now I don’t have to dive too deep into why the o-line has been such a hot topic, but after giving up a Power-5 worst 51 sacks in 2019, you get the point.

Well, after two scrimmages during fall camp, these are my projected starters on the o-line. Just so you’re aware, this was the starting lineup on the offensive line in the two scrimmages, so I’m going off that.

I’ve been critical of Campbell in the past, but it seems that he’s had a very productive offseason, and has impressed new OL coach Garin Justice. So far in fall camp, Campbell has been with the first-team offense at LT, and has done well enough to remain there.

Last year, Campbell started two games, one at right tackle against UF, and then at left guard in the bowl game. After an up-and-down first two seasons at Miami, can Campbell become the consistent left tackle the Hurricanes have needed?

One of the more interesting players on the roster, Traore was a JUCO transfer that came to Miami last summer. Coming into 2020, the redshirt sophomore has started at LG in the first two scrimmages, and has held his own against a very talented Miami defensive line.

It’s been reported that Jakai Clark and Zion Nelson have been rotating at left guard, so I’d say this is the biggest position battle on the offensive line going on before week-one.

Gaynor started all 13 games in 2019, and has emerged as one of the leaders on Miami, known for his gritty playing style and toughness. Along with that, Gaynor put together a solid 2019 campaign, especially in pass-blocking situations.

Canes C Corey Gaynor up next. Why he’s optimistic about the line? “A whole other year together. … We’re together all the time, we’re working together… We’re going to continue to work hard to be the best offensive line we can be.

The highest rated offensive lineman for Miami last year, according to PFF, Scaife has 20 career starts under his belt, though they’ve come primarily at right tackle. Still, Scaife is the kind of lineman that I don’t worry about, and possesses the combination of athleticism and strength you want in the big guys up front.

Garin Justice on DJ Scaife: “He can probably play all five … That shows the type of player and talent he is.”

Finally, we come to Williams, who transferred to Miami in June from Houston, where he protected D’Eriq King for two years. During King’s historic 2018 season, Williams allowed just two sacks on the quarterback. With solid starting experience, and also great length when it comes to his ability, I think the addition of Williams will be one of the biggest keys to success for the Hurricanes in 2020.

Corey Gaynor calls Jarrid Williams “gifted, massive. When he gets his hands on people, he moves them.” He said John Campbell has been very technically sound at left tackle.