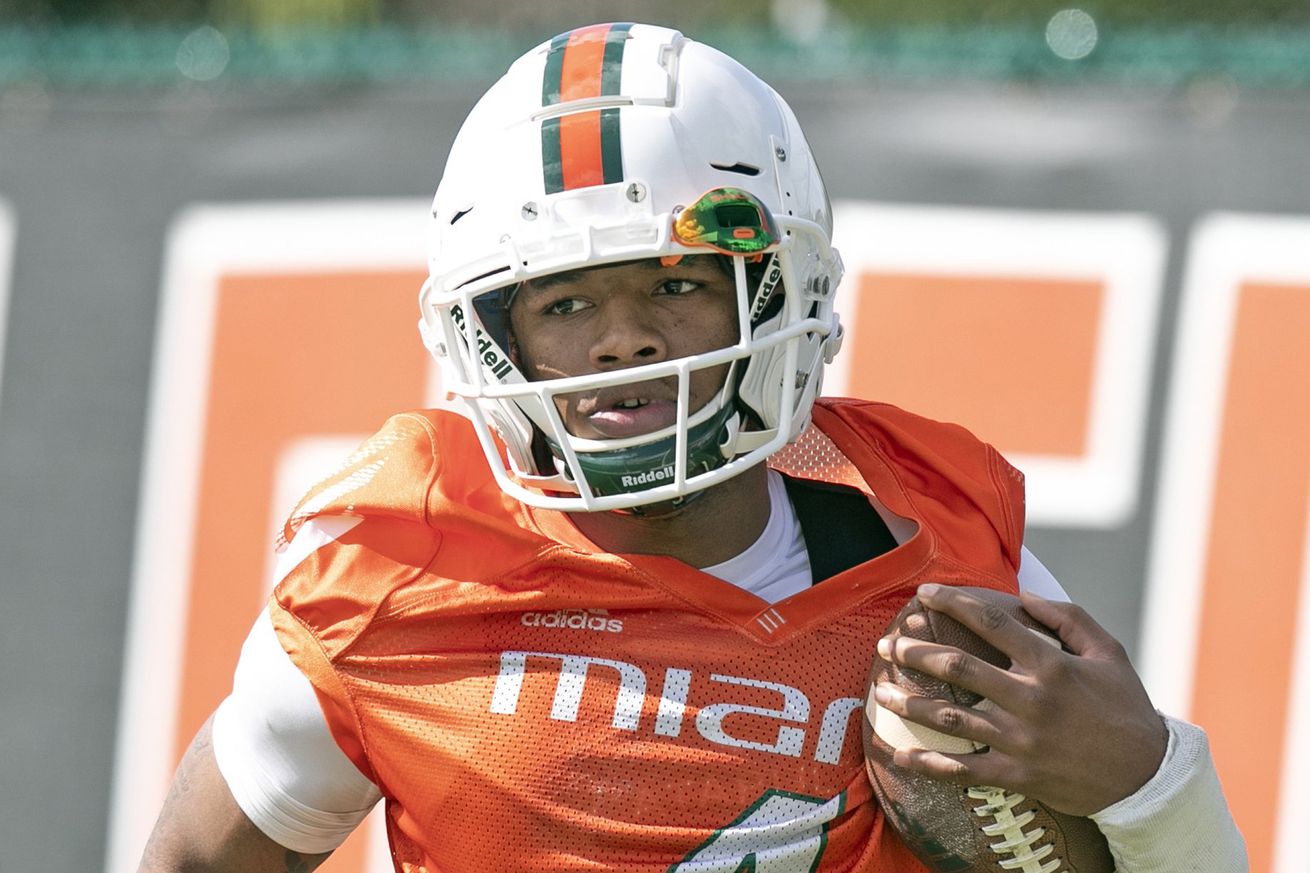 Through the first few weeks of fall camp, several players have stepped up for the Miami Hurricanes, making a name for themselves in preparation for the 2020 season. Two of those players have been true freshmen Xavier Restrepo and Jaylan Knighton.

Restrepo and Knighton, who were high school teammates at Deerfield Beach, came into their freshman years with high expectations, and haven’t disappointed thus far.

Jaylan Knighton says Xavier Restrepo “never stopped” recruiting him when he was committed to FSU as a high school senior, and then there was that one time he just felt he had to throw up the U with him in that pic that went around.

In the two scrimmages Miami has held during fall camp, Restrepo has been the Canes leading receiver, with 7 receptions, 133 yards and 2 total touchdowns, as he had a 70-yard score off a reverse in the first scrimmage. This past weekend, Restrepo finished with 5 catches, for 79 yards and a touchdown.

Knighton, not to be outdone, is the leading rusher so far, with 160 yards on the ground, he’s also scored 2 touchdowns. The first scrimmage, Knighton broke out onto the scene with 126 rushing yards on 10 carries.

Restrepo’s production hasn’t come as a complete shock to me, but I will admit I was a little surprised, when you consider the plethora of options at wide receiver. Miami has four WR’s that are expected to carry the load at the position, senior Mike Harley, juniors Mark Pope and Dee Wiggins, then redshirt freshman Jeremiah Payton. However, offensive coordinator Rhett Lashlee has said he likes to use at least a six-man rotation at receiver, so you can expect to see Restrepo and others see plenty of playing time.

Freshman Xavier Restrepo gonna be a major problem for opponents.. 5 Rec for 79 yards and a TD. pic.twitter.com/FrMhmUUoyb

Then there’s Knighton, who began to turn heads during Miami’s week of spring practice. Since Deejay Dallas is now in the NFL, and Lorenzo Lingard transferred to Florida, many people are expecting the speedster out of Broward County to make an impact early on. Speaking of speed, it was reported that Knighton hit 21.9 MPH during the second scrimmage.

Jaylan Knighton said the fastest he’s been timed running on the field at Miami is 21.9 MPH

In Lashlee’s up-tempo spread offense, Knighton’s skill-set is one that fits perfectly, and he’ll be sharing reps with junior running back Cam’ron Harris, as well as fellow true freshman Donald Chaney Jr.