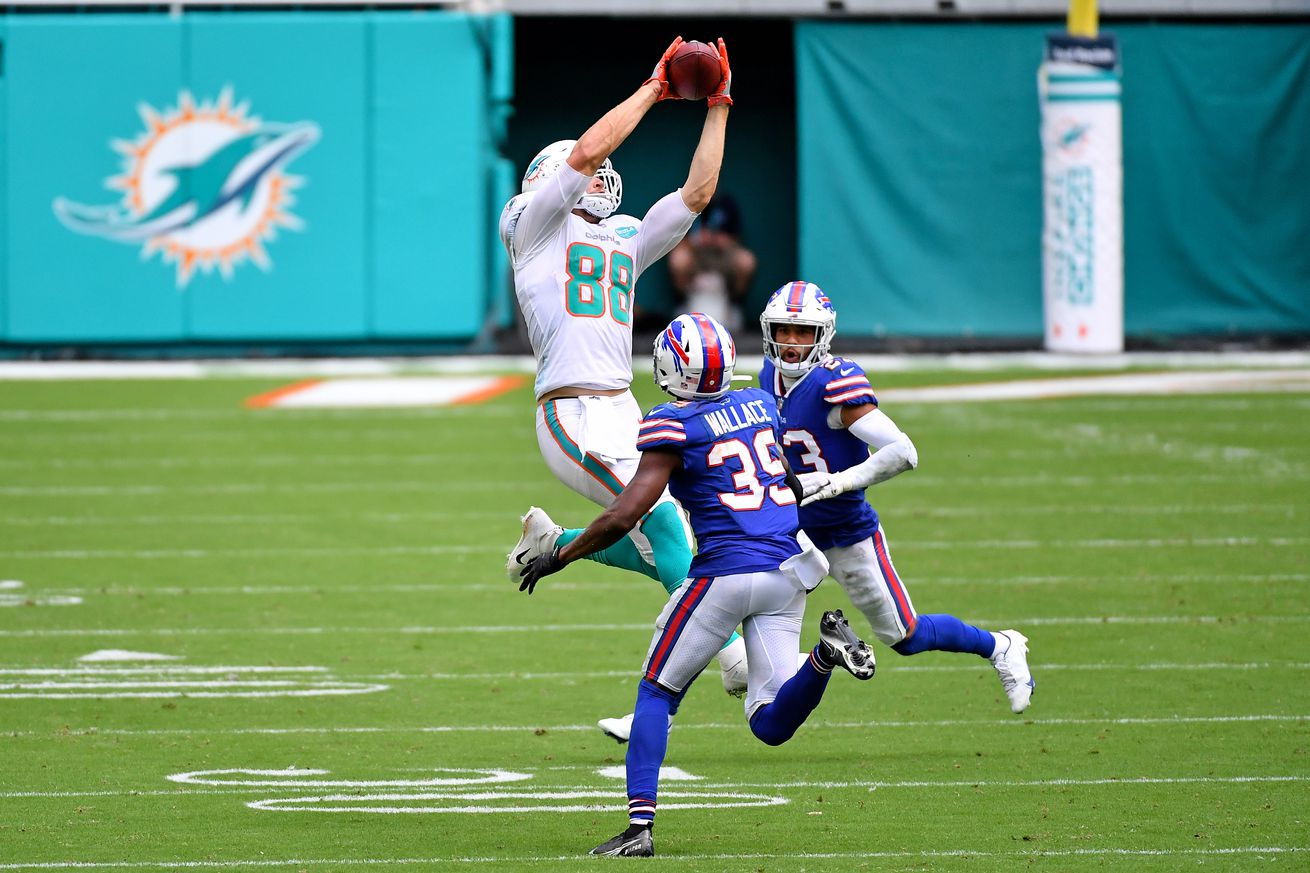 The Miami Dolphins dropped to 0-2 on the season with a 31-28 loss to the Buffalo Bills this past Sunday. After the defense struggled early in the game, especially with the crossing patterns the Bills ran incessantly throughout the game, and the Dolphins offense struggled to find a rhythm early, the momentum turned toward Miami’s favor for a portion of the second half. The Bills returned to the crossing patterns late, however, and Miami was not able to hold on to the lead and finally lost as they failed to recover an onside kick.

It was an entertaining game from a football perspective, but it was a frustrating game for Dolphins fans. The presumed strength of the team, the defensive secondary, struggled due to injury and miscommunication. The offense took too long to find a rhythm. It was not what anyone expected to see out of the Dolphins on Sunday, and it was disappointing.

That said, there were positives to come out of the game. We take a look now at the stock watch for the Dolphins from Week 2:

Stock up: Mike Gesicki, tight end – That was a hell of an performance for the Dolphins tight end. Eight receptions for 130 yards with a touchdown. Gesicki was making one-handed catches, he was fighting for the ball in traffic, and he was just a menace to the Bills defense. Gesicki’s 130 yards receiving is a team record for a tight end.

Stock down: Noah Igbinoghene and Nik Needham, cornerbacks – Tow young cornerbacks being relied upon as heavily as rookie Igbinoghene and second-year Needham is rough. But, they had to perform and they struggled. Stefon Diggs took it to Igbinoghene throughout the game and Needham just had a miserable day, for the most part against Cole Beasley. They obviously can both learn and grow from the rough day, but Igbinoghene was among the top performers in camp this year and Needham showed he can play last year when he was forced into a starting role. They have to play better if the secondary is going to cover the injury to Byron Jones.

Stock up: Isaiah Ford, wide receiver – Ford quietly had seven receptions for 76 yards on Sunday. He showed up and he made plays. Ford is looking more and more like the second option in the receiver group because…

Stock down: Preston Williams, wide receiver – …Williams is quickly disappearing from the offense. It may be a case of he is not 100 percent sure of his knee yet, but whatever the case, three catches for 67 yards in the first two games is not going to cut it for a player who was expected to be a “number one” type of player heading into this season.

Stock up: Matt Haack, punter / Jason Sanders, kicker – Five punts, three inside the 20, with a 52.4 average is simply impressive. Haack has been crushing the ball this season. Two-for-two on field goals including a 52-yarder, scoring eight points. Sanders continues to be the most accurate kicker in Dolphins history, and the team clearly has confidence in him.

Stock down: Jordan Howard, running back – Howard has fallen from being the top running back on the depth chart to an after-thought in just two weeks. Myles Gaskin has firmly established himself as the lead runner, both with results on carries and receptions, and Matt Breida is seeing the field as the second-string runner. Howard is seeing some playing time, he got five carries compared to seven for the other two running backs, but he only picked up four yards, bringing his season total to 13 carries for 11 yards with two touchdowns. A 0.8 yards-per-carry average is just not cutting it, and Howard’s stock rating continues to plummet.