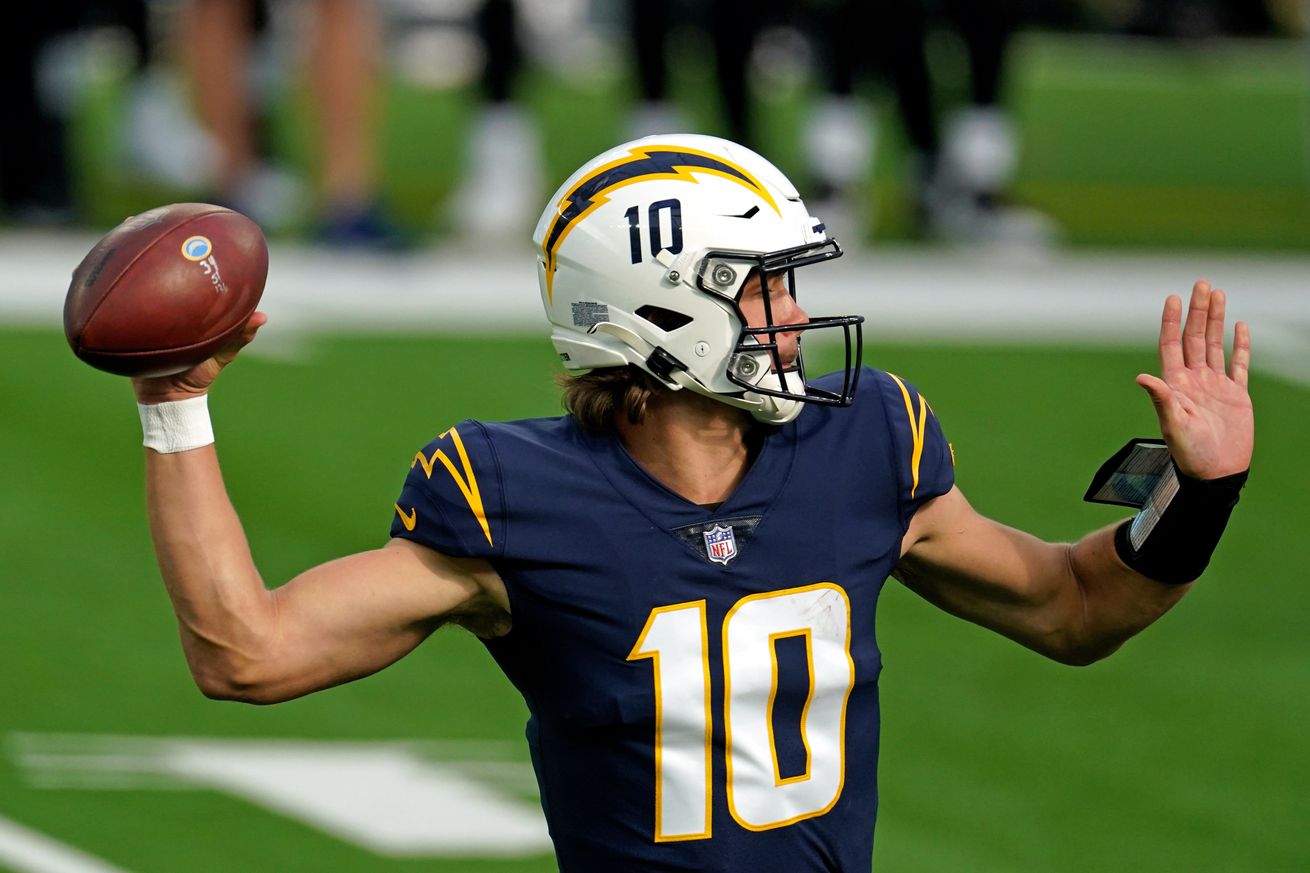 We are only a few hours away from the Miami Dolphins kicking off against the Los Angeles Chargers. The game, which will feature two rookie first-round quarterbacks, kicks off at 4:05pm ET on CBS. I had a chance earlier this week to speak with Michael Peterson from Bolts from the Blue, the SB Nation team site for the Chargers, to get a closer look at quarterback Justin Herbert, Los Angeles’s red zone struggles, and the Chargers as a whole.

Of note, Peterson and I spoke on Thursday, before the Chargers ruled defensive end Joey Bosa out of the game.

Well, I guess there really is only one place to start. Justin Herbert is the talk of the league right now, even overshadowning first-overall pick Joe Burrow. What is Herbert doing well and what is he doing that reminds you he is still a rookie?

The biggest surprise from Herbert’s play this season has been his ability to handle pressure, maneuver the pocket, and deliver catchable passes down the field. Herbert has nine touchdowns of over 20 yards this year while Burrow has just one. It’s also been incredible to see just “who” Herbert has been throwing touchdowns to this year. Of his 17 touchdowns, eight have gone to undrafted free agents who are either in their first or second year in the NFL. He hasn’t needed to rely on guys like Keenan Allen, Mike Williams, or Hunter Henry to have success. You just don’t see rookies do what he’s doing with this level of a supporting cast.

The Chargers are moving the ball incredibly well this year, but just do not seem to have the points to match of offensive production. Why are they not scoring like a team averaging 420.0 yards per game would be expected to score?

Despite having a quarterback that can move the ball seeming at-will between the 20s, the Chargers have struggled to find their groove in the red zone. Offensive coordinator Shane Steichen’s success with Herbert is commendable, but he has yet to develop any sort of high-efficiency plays in the red zone. Goal-line fades aren’t going to cut it. The Chargers have one of the best route-runners in the NFL and can’t be bothered to look his way or scheme up plays that capitalize on his skill set. The best teams put in that extra work to make sure drives aren’t wasted on field goals. This is a big reason that’s keeping the Bolts from reaching their potential.

The Chargers have had some injury struggles early this year, then appeared to be starting to get healthy, only to have the bug bite again. The obvious name on the injury report to discuss is Joey Bosa, who is dealing with a concussion. Should we expect to see him this weekend? How is the rest of the team dealing with injuries this season? Did injuries force the team to really have to rely on Kalen Ballage last week?

As of me typing this, Bosa participated in individual drills on Thursday and looked pretty good running around. If he is a full-participant on Friday, his chances of suiting up on Sunday skyrocket. The team has surprisingly handled injuries well in that they’ve been able to build double-digit leads on some of the best teams in the NFL. However, it’s tough not to say they’ve handled it poorly in the end since they still hold a 2-6 record.

In terms of the team’s usage of Kalen Ballage, Anthony Lynn told me on Wednesday that he believes Ballage is better than what he showed in Miami and New York, so it’s no surprise they let him carry the load against the Raiders. Rookie Joshua Kelley has been very underwhelming and it didn’t take Ballage long to show he’s still got more potential. Starter Justin Jackson is still dealing with a knee injury so it’s likely Ballage will play another prominent role on offense this Sunday.

How do you attack the Chargers offense? Defense?

The Chargers’ defense has been susceptible to the deep ball and inside runs so far this year. Besides Michale Davis, the Bolts don’t have a corner with above-average speed. Casey Hayward has had a rough time when defending deep passes and it may lead to Devante Parker having a great game. The linebacker duo of Kyzir White and Kenneth Murray Jr. have also been one of the worst in coverage this season with both ranking in the top-15 in terms of yards allowed in coverage. This could be a big day for tight end Mike Gesicki.

The weak point for the Chargers offense is obviously their offensive line. They’re one of the worst units in run-block win rate and are a middling group in pass-block win rate. Herbert has been one of the most-pressured quarterbacks in the league this season which is only more of a testament to him finding success despite the lack of protection. The Dolphins’ success with their zero blitzes could be a huge gamebreaker for them. They’ve got the secondary to backup the front seven which could force the Chargers into an early hole if they can’t figure it out.

As we have reached the mid-way point of the season, what are your overall impressions of the Chargers and what do you expect to see the remainder of this season?

The overall impression of the Chargers this season is not a good one. It’s unfortunately just “another year” for the Bolts. Injuries, a plethora of coaching/player errors, and an inability to perfect the simple things which always add up in the end. So many things are going wrong that it’s impossible to point at just one thing. At some point, a team is either good enough to get the job done or they aren’t. There comes a time where the narrative needs to switch from “this team would be good but…” to “this team just isn’t as good as people thought.”

I don’t expect a ton from this team in the second half of the season. They’re on pace to go 4-12 and I don’t see how they get above 6-10 or 7-9 right now. With three-straight games against AFC West opponents to end the year, they’ll have to find their groove ahead of Week 15 if they hope to end the year on some form of a good note.