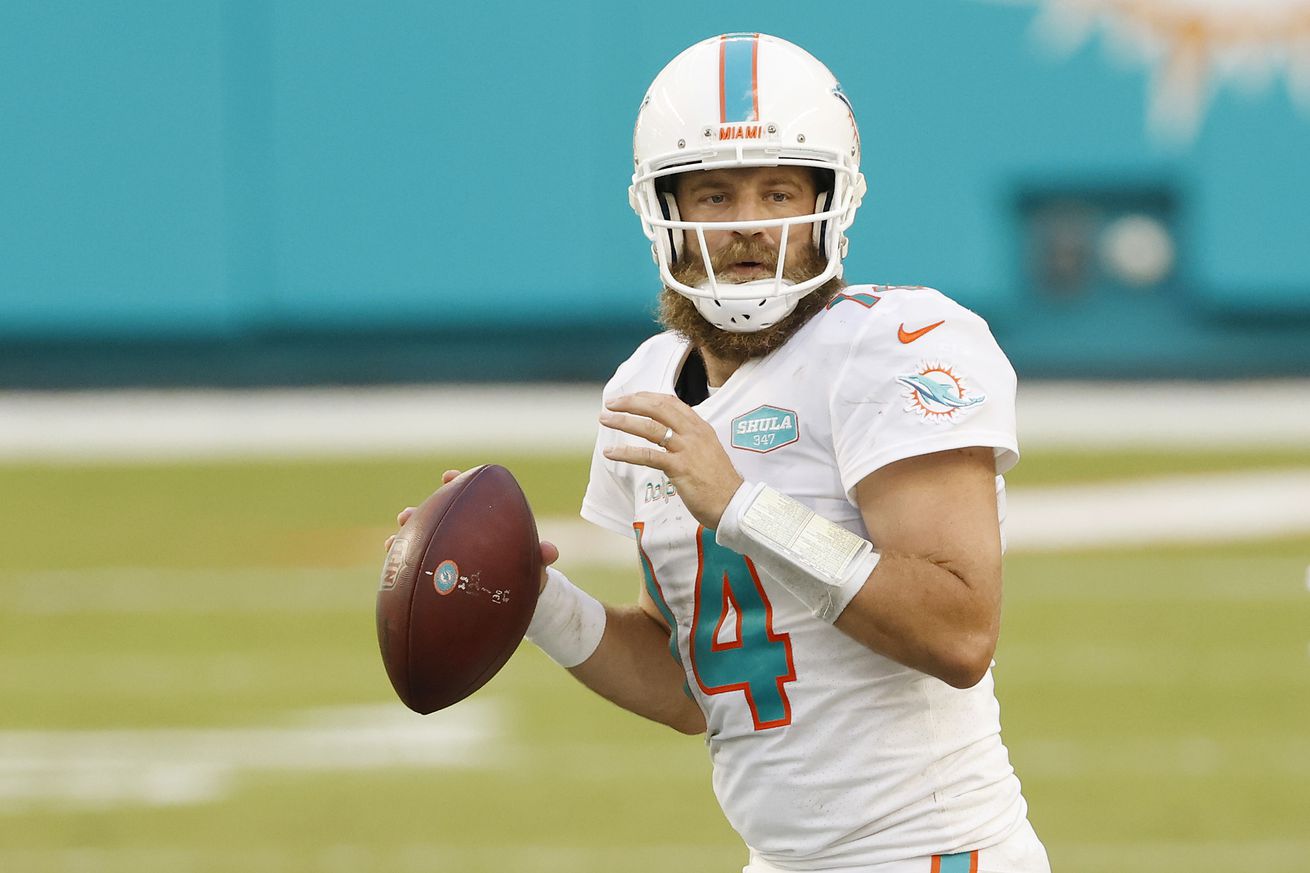 By now, we’ve all heard news that Tua Tagovailoa will be the Miami Dolphins starting quarterback for the foreseeable future. But while many expected the change to be met with well wishes and smiles, Fitzpatrick wasn’t necessarily happy for the sudden demotion.

“my heart hurt all day. it was heartbreaking for me.” -ryan fitzpatrick

When asked whether or not he was planning to ask the Dolphins for a trade, the 17 year veteran had this to say.

“I have no idea. No, I don’t go in there and demand or ask for anything. And in terms of the other stuff, the long-term future, I have no idea. I know that I just love playing this game. I love being out there and the camaraderie that that brings and dealing with the adversity with your teammates; those are the kind of things that I truly love about this game, so I definitely like playing more than I like sitting and watching.”

Which now begs the question, could the Dolphins field trade offers for Fitzpatrick? And what would it ultimately take to poach the veteran quarterback.

Brian Flores didn’t have an answer for that 😉 , and did a splendid job of dodging the question in typical New England fashion.

“Again, those questions really go to (General Manager) Chris (Grier). They should go to Chris. My focus is on the Rams and getting ready for the Rams, getting our players – this team – ready to play the Rams. It’s a good opponent. They’re tough. They’re physical. They’re talented. They play tonight so we’ll be watching that and again, that’s really a Chris question. He’s the one who handles all the calls from different teams. My focus is on this team, this week and getting our guys ready to play.”

And then moments ago, when Chan Gailey was asked his thoughts about the situation. He did a full 180 heel turn. One that Vince McMahon and the suits in Connecticut would be proud of.

Gailey on Tua Tagovajloa: “He was good at reading RPO (at Alabama). As time goes on, we can do more of those to fit in what he’s done in the past.”

He then went on to drop this juicy quote.

“I like him. I love having him here. I hate to see him go, but somebody would step in. We do what we think is best for the football team in every decision,” Dolphins OC Chan Gailey on the possibility of Ryan Fitzpatrick being traded.

I don’t know whether or not Chris Grier is openly fielding trade offers for Ryan Fitzpatrick. I also don’t know if the 17-year veteran asked to be traded. But I think we can all agree, trading Fitzpatrick would put the team at risk.

Because what if something were to unfortunately happen to Tua? Who would the team have to rely on? Reid Sinnett? Jake Rudock off the streets? Colin Kaepernick? eye emoji

Before the Dolphins make any trade for Fitzpatrick, they need to have a plan in place.

10 1/2 in hands were too big to be a banker, not gritty enough to be a blogger, so I guess QB it is. @BarstoolBigCat

The question then becomes, what would a team offer for a starting quarterback with an expiring contract—mid-way through the 2020 season?

My co-host Jake Mendel mentioned the Cowboys as a team to keep an eye. And I think we can all agree he’d be an upgrade in Dallas, and that was before Dalton took that dirty hit.

You could also make the case for a few other teams as well.

Could a team be desperate enough to trade a third or fourth round draft pick? I don’t think so. So then you potentially put the entire 2020 season in jeopardy for a mid to late round draft pick?

This is all a moot point if Fitzpatrick has asked to be traded.

The NFL trade deadline is one week from today. And while I must remind you all to go out and VOTE, the day will be filled with plenty of excitement.

Will Ryan Fitzpatrick be a Dolphin on November 4th? You’ll have to tune in to find out.