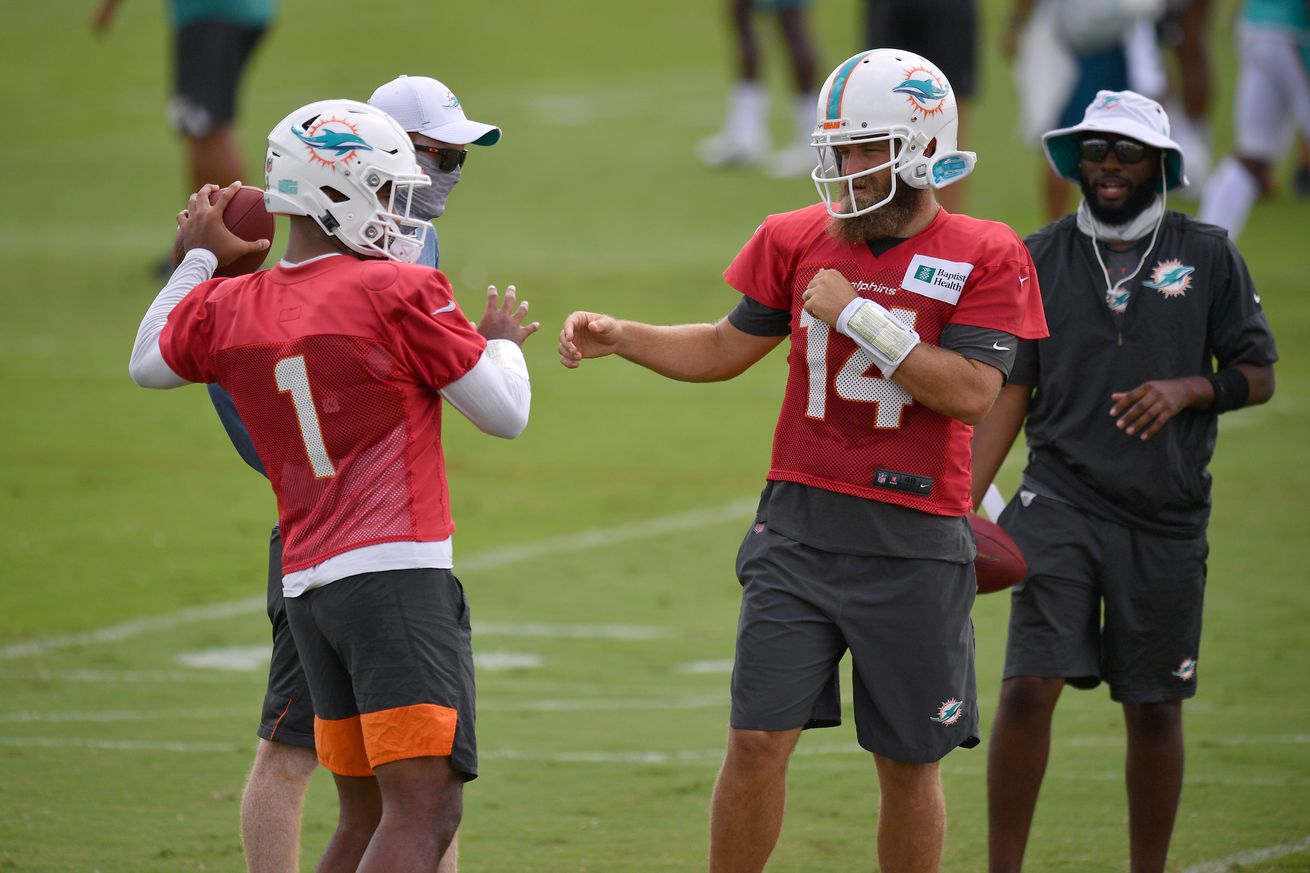 The Miami Dolphins released on Monday their first depth chart of the 2020 NFL season. There were a couple of interesting items on it, like Mike Gesicki being listed as the second-string tight end behind Durham Smythe. Over the past few years, the Dolphins’ depth chart has remained extremely fluid, with players starting games despite being listed as second- or third-team players on the depth chart. Head coach Brian Flores discussed exactly that over the last two days when asked about the depth chart.

“The guys who are, let’s call it ‘starters,’ are guys who obviously had good training camps and showed that from a consistency standpoint, from a technique/fundamentals standpoint, from a communications standpoint; they were ahead of some other guys.” Flores said Monday ahead of the depth chart release. “Again, that initial depth chart, I wouldn’t put too much into that. There are so many groupings. What grouping are we talking about? Are we talking about 12-personnel, 11-personnel, 20-personnel, 10-personnel, big nickel, little nickel, dime; so I’m not into the whole starters, back-ups. I think in football, you’ve got 11 guys on the field, a lot of different groupings. I would say this year specifically with no preseason games, we’re going to see a lot of guys who are playing. Every rep counts. Every snap counts, so I don’t really put too much into, ‘hey, this guy’s the starting this’ or the starting right guard or left guard or defensive tackle. So you’ll get it here in a little bit and I’m sure you guys will (laughter) take a long hard look and write about who’s starting, who’s not. But I think we’ll see a lot of guys playing in a lot of different groups.”

While there are plenty of important pieces to discuss, like having two rookies starting on the offensive line (Austin Jackson at left tackle and Solomon Kindley at right guard), two positions came up during Tuesday’s media availability.

“That’s always a combination of both [experience and best player],” Flores explained of how a coach determines who should be the team’s nickel cornerback. “Talent, experience, ability to communicate – I think all of those things play a factor in who’s in at the nickel position or any of those sub kind of packages. We’ve had a lot of conversations about who’s going to be the nickel, who’s going to play the dime, who’s going to play defensive line in those situations. But like you said, Julian Edelman is a great player. He’s in the slot primarily, but he also plays outside. We’ve seen him in the backfield also, so they move him around quite a bit. We’ve got to be prepared for really all of it and that’s what this week of preparation is all about, so hopefully we go out there and have a good week of practice. They’re going to show us things that we haven’t seen. There’s been no preseason games; but if we can communicate, if we can play with good fundamentals and technique, I think we’ll be okay.”

On the other side of the ball, Flores spoke about the slot receiver role as well, stating, “I think we have a lot of good players in the receiver room, in the tight end room, in the running back room. Who aligns in the slot is really dependent on what formation we give them. You can see a running back in the slot, you can see a tight end in the slot, you can see a receiver in the slot. It depends on what formation we’re giving them, what matchup we’re looking for. The specifics to one player – if it’s Isaiah or Jakeem or (Matt) Breida or DeVante (Parker), they’ve all been in the slot. So specific to that area of the field, it could be a number of people. I think your question is about maybe a couple of players – Isaiah, Jakeem. I think Isaiah has had a good camp. He’s been dependable and productive in practice. He’s made a few plays in games, particularly at the end of last year. Jakeem obviously is explosive. He’s as explosive a player as there is in the league. I think we have a few options. Once we get to Sunday, we’ll see who is out there and who can help us try to win a football game.”

The full Dolphins depth chart as of Monday is below: