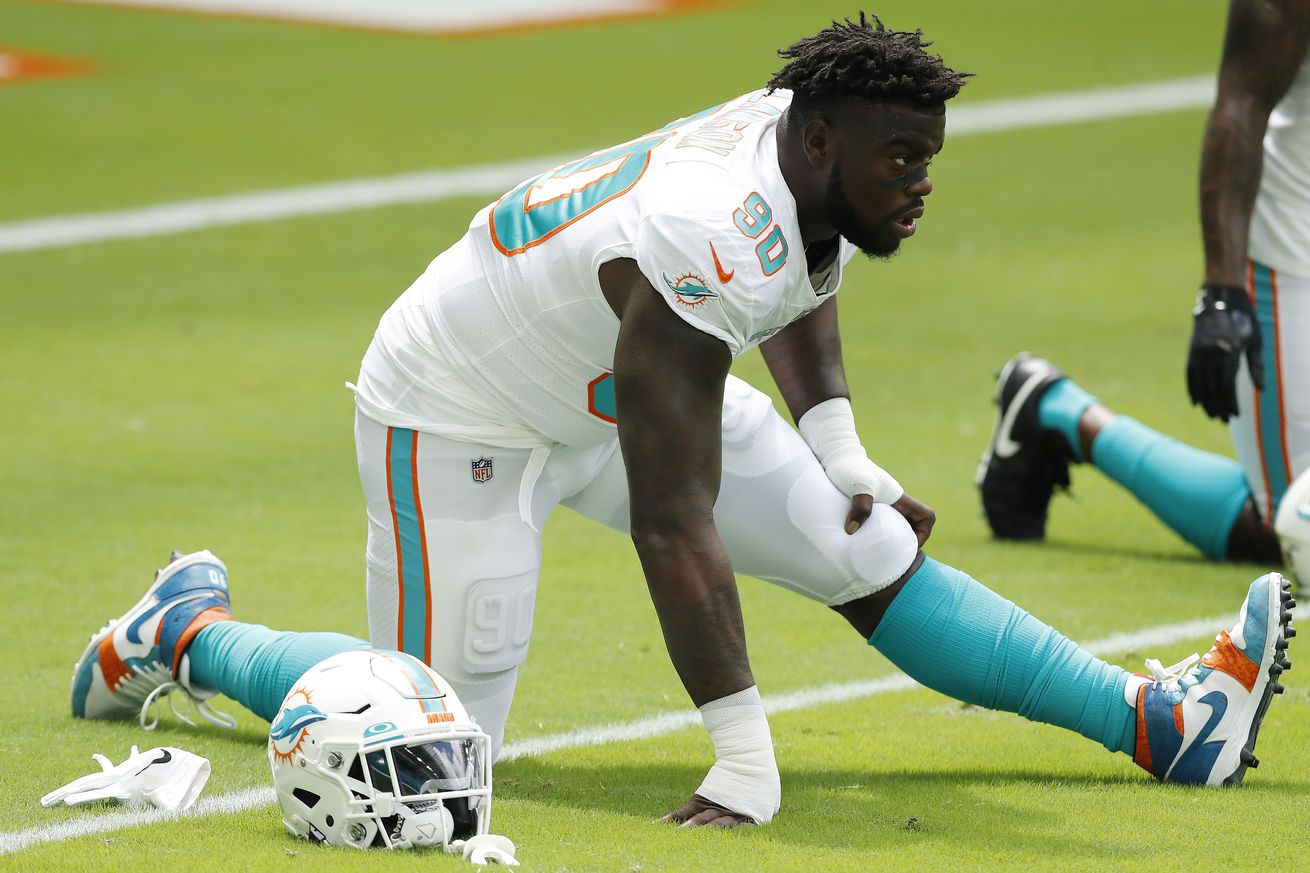 The final injury reports for both the Miami Dolphins and the San Francisco 49ers ruled out multiple players ahead of their Week 5 faceoff. Those players being unavailable for Sunday’s contest has led to both teams making roster moves to fill holes and provide depth.

On Miami’s side of the report, defensive end Shaq Lawson and tight end Durham Smythe will both not be available. Lawson was limited in practice late in the week, but his shoulder injury will cause him to miss the contest, while Smythe’s knee never let him pratice nor be a possibility for Sunday. At tight end, Miami will move forward with just Mike Gesicki and Adam Shaheen active on the roster, but at defensive end, the team has elevated Tyshun Render from the practice squad.

Render was signed by the Dolphins as an undrafted free agent out of Middle Tennessee State this spring. He started all 12 games last year as a senior, recording 49 tackles, 3.5 sacks, one interception, six passes defensed, two forced fumbles, and two fumble recoveries.

Miami also listed wide receiver Jakeem Grant as questionable on the injury report with an illness.

The 49ers, who have been dealing with injuries all season, ruled out defensive end Ezekiel Ansah and cornerbacks Dontae Johnson, Emmanuel Moseley, and K’Waun Williams. Ansah, who will miss the remainder of the year with a biceps injury, and Williams, who has an ACL straing, were both then added to the growing list of players on Injured Reserve for San Francisco.

San Francisco then promoted cornerback Jamar Taylor to the active roster from the practice squad, while elevating cornerback Brian Allen and wide receiver Kevin White for the week. Taylor was originally a second-round selection in the 2013 NFL Draft for the Dolphins, playing for Miami from 2013 through 2015. He has also spent time with the Cleveland Browns (2016-17), Arizona Cardinals (2018), Denver Broncos (2018), Seattle Seahawks (2019), and Atlanta Falcons (2019). The Dolphins traded Taylor to the Browns during the 2016 NFL Draft in a swap of seventh-round picks. He has 236 career tackles with 31 passes defensed, three interceptions, two forced fumbles, one fumble recovery, and a half sack.

Allen was a seventh-round draft choice by the Pittsburgh Steelers in 2017, playing two seasons with the club before being waived/injured in 2019. He then spent time during the season on the Seattle Seahawks’ practice squad and started the 2020 training camp with the Seahawks before a brief stint in the Buffalo Bills’ training camp. Primarily a special teams player for the Steelers, he appeared in 16 games with three special teams tackles.

White was a seventh-round pick by the Chicago Bears in 2015, playing in 14 games over four seasons with the team. He spent part of the 2019 training camp period with the Arizona Cardinals, then joined the 49ers during the 2020 training camp period. He has 25 career receptions for 285 yards.