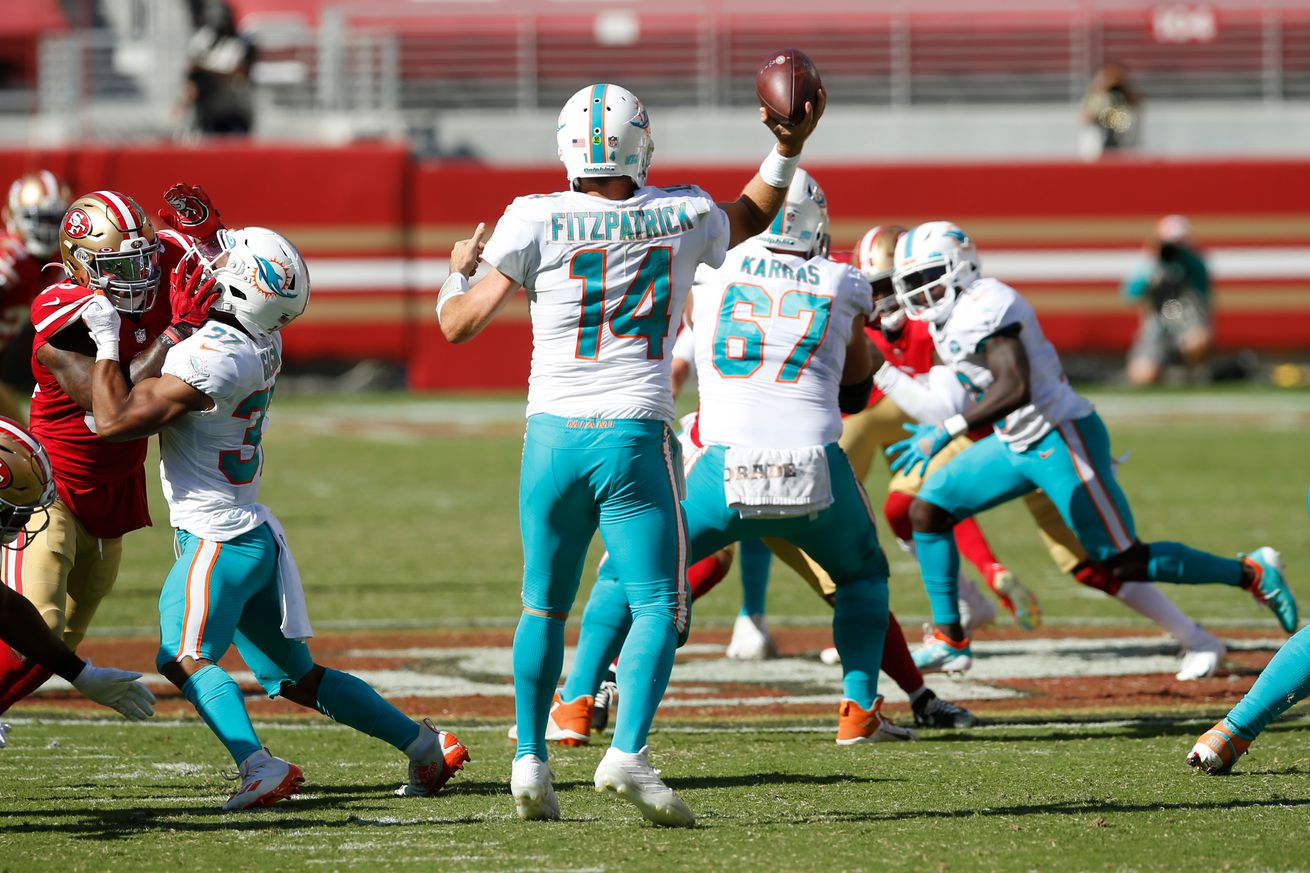 Things I learned this morning as I was putting together the offensive snap counts for the Miami Dolphins in their blowout win over the San Francisco 49ers: Adam Pankey played a lot of snaps as a sixth offensive lineman, Jakeem Grant’s playing time went down a lot from last week, eating clock in the second half meant an increase in snaps for Chandler Cox, and I apparently never did the Week 4 snap counts.

I feel like I did them, but apparently not. So, once again, we have a two-week snap count for Miami’s offense as we catch up.

The major snap count changes in Week 4, a Miami loss to the Seattle Seahawks, included a foot injury to Austin Jackson that limited him to just 46 snaps (65 percent) of the game, with Julién Davenport filling in at left tackle for the other 25 snaps (35 percent). Grant saw his playing time jump from eight snaps in Week 3 to 28 snaps (39 percent) in Week 4.

In Week 5, the 100 percent club continued to be quarterback Ryan Fitzpatrick and the offensive line. Jesse Davis switched from right tackle to left tackle for the game, replacing Jackson who was inactive, while Ereck Flowers manned left guard, Ted Karras remained at center, and rookie Solomon Kindley continued to lock down the right guard position. Rookie tackle Robert Hunt made his first career start after playing snaps earlier in the year as the team’s tackle eligible/sixth offensive lineman. All five of them played all 67 snaps.

At running back, the surprise on Sunday was the inactivation of Jordan Howard. A healthy scratch from the game plan, Howard has been struggling to get started this year, and it reflects in his snap counts. He has a total of 29 snaps, compared to fourth-string runner Patrick Laird, whop has 18. Fullback Chandler Cox has 72 snaps on the season. Howard is clearly out of favor with the coaching staff.

Myles Gaskin continues to pace the running backs group, picking up 42 snaps (63 percent) this week, keeping him at about two-thirds of the the total season snaps. Matt Breida added 21 snaps (31 percent) this week, his season high thus far. Laird played 10 snaps (15 percent), while Cox was on the field for 23 snaps, a new season-high for Miami’s fullback who was in as a lead blocker for much of the chew-clock portion of the game.

At tight end, Adam Shaheen led the way with 38 snaps (57 percent) played, while Mike Gesicki was on the field for 30 snaps (45 percent). Durham Smythe missed the game with an ankle injury.

Here is the full table for the season: