While Tuesday morning’s news will significantly alter the Dolphins’ draft plans, the allegations of tanking brought forth by former head coach Brian Flores are now in the team’s rear-view mirror. The NFL cleared the organization of wrongdoing here.

The Dolphins did not intentionally lose games, nor did Stephen Ross instruct Flores to do so to improve the team’s draft slot, per the investigation (Twitter link via NFL.com’s Tom Pelissero). Flores accused Ross of offering him $100K per loss in 2019. The NFL is not disputing Flores’ claim about the $100K offer but determined Ross’ proposal for losses was not to be interpreted as serious.

“Even if made in jest and not intended to be taken seriously, comments suggesting that draft position is more important than winning can be misunderstood and carry with them an unnecessary potential risk to the integrity of the game,” Roger Goodell said in a statement. “The comments made by Mr. Ross did not affect Coach Flores’ commitment to win and the Dolphins competed to win every game. Coach Flores is to be commended for not allowing any comment about the relative importance of draft position to affect his commitment to win throughout the season.”

Flores, whose tampering accusations led to punishment for Ross and the Dolphins, said he wrote a letter to Dolphins executives indicating concern about the owner’s offer. Flores had also alleged that GM Chris Grier informed him Ross was mad when the team’s wins down the stretch that season compromised its 2020 draft position. Although Ross will be tied to the tampering charge, the investigation’s other interviews did not lend support to Flores’ account he was given a serious offer to lose games for draft positioning. 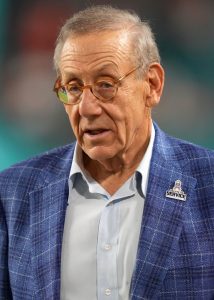 “I am thankful that the NFL’s investigator found my factual allegations against Stephen Ross are true,” Flores said in a statement. “At the same time, I am disappointed to learn that the investigator minimized Mr. Ross’s offers and pressure to tank games, especially when I wrote and submitted a letter at the time to Dolphins executives documenting my serious concerns regarding this subject at the time, which the investigator has in her possession. While the investigator found that the Dolphins had engaged in impermissible tampering of ‘unprecedented scope and severity,’ Mr. Ross will avoid any meaningful consequence.”

Pertaining to the tanking accusation, the NFL determined the 2019 Dolphins — who had gutted their roster to begin a rebuild that year — “tried hard to win every game, including at the end of the year when they beat Cincinnati and New England, despite worsening Miami’s position in the 2020 draft.”

The Flores-led team’s upset wins late that season dropped Miami’s top 2020 draft choice to No. 5, when Tua Tagovailoa went off the board. The Dolphins were interested in packaging all three picks for Joe Burrow, but the Bengals were uninterested in that swap.

“The independent investigation cleared our organization on any issues related to tanking and all of Brian Flores other allegations,” Ross said in a statement. “As I have said all along, these allegations were false, malicious and defamatory, and this issue is now put to rest.”

The Dolphins’ roster purge led the likes of Ryan Tannehill, Laremy Tunsil, Minkah Fitzpatrick and others off the roster in 2019. Given the product the team was putting on the field to start that season, one that began with a 59-10 loss to the Ravens, Flores helming that Dolphins iteration to a 5-11 record made for a major surprise. It also prevented the Dolphins from securing the Burrow draft slot. The three-year Dolphins HC certainly did not accuse players or his staff of trying to lose games, making the upset over the Patriots moot with regards to his accusation Ross offered him bonuses for losses. But Tuesday’s report including that as evidence is nonetheless interesting.

Flores has also sued the Dolphins, along with other teams and the NFL, for racial discrimination during their hiring processes. Steve Wilks and Ray Horton have joined that class-action lawsuit. That matter remains ongoing, but the $100K-per-loss saga is now behind the Dolphins, who will deal with the consequences from the tampering penalties in the coming years.