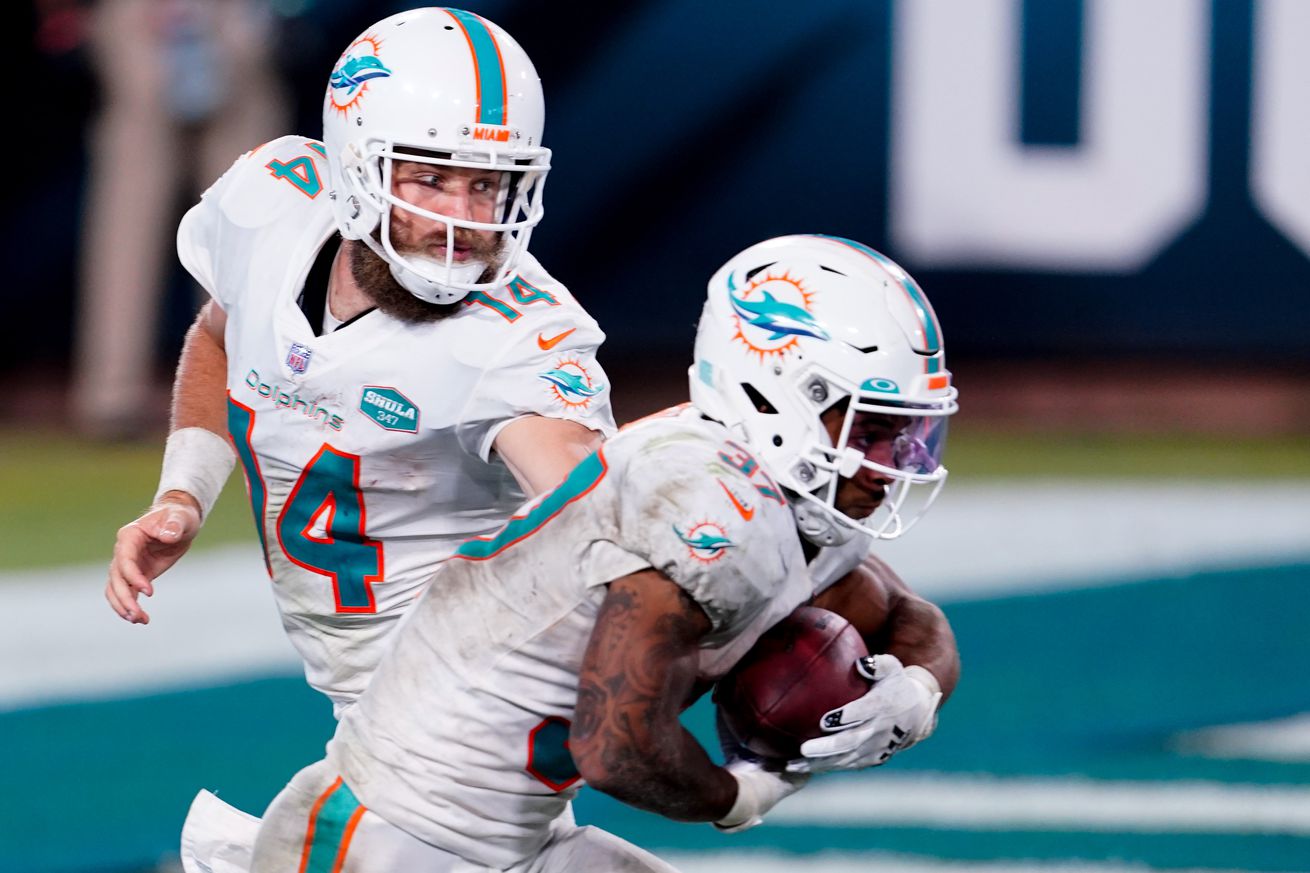 The Thursday Night Football game kicking off Week 3 featured a young, rising team dominating their way to an early season win. The unexpected part for many was that it was the Miami Dolphins, led by stellar performances from quarterback Ryan Fitzpatrick and running back Myles Gaskin, beating up on the Jacksonville Jaguars. So many had seen Gardner Minshew and the Jaguars as the team on the rise, but, on Thursday, it was clearly the Dolphins who looked the best.

“We got off to a good start,” head coach Brian Flores said after the game. “It’s something we have been talking about. I think our staff did a good job offensively, defensively and in the kicking game in a short week of getting the guys ready to go. [Offensive Coordinator] Chan [Gailey], [Defensive Coordinator] Josh [Boyer], [Special Teams Coordinator] Danny [Crossman] – a lot of credit goes to them for the work they did this week. The credit also goes to the players because they put the work in. They did a good job with the communication, the fundamentals and the techniques. They made plays out there, but it was a total team effort in the offense, defense and special teams.”

The Dolphins offense came out firing on all cylinders. The team scored touchdowns on their first three possessions, completing drives of 84-, 80-, and 75-yards. The Dolphins eventually turned more conservative in the second half, leading 28-7 for much of the final 30 minutes, but it does not change how effective the team was. Fitzpatrick finished the game 18-for-20, with only seven passes thrown in the second half, for 160 yards and two touchdowns, giving him a 133.3 passer rating. ESPN’s Quarterback Rating metric, using a scale of zero to 100, with 50 being average quarterback play, rated Fitzpatrick’s performance at 97.2 for Thursday night. Fitzpatrick also ran seven times for 38 yards with a touchdown and recorded a reception on a pass batted in the air that he caught for no gain.

“I thought Fitz played well,” Flores said Thursday night. “We moved the ball efficiently in the first half. It could have been better in the second half. I thought he made good decisions. I thought he ran it when he needed to run it. I thought he had good command of the offense tonight. It wasn’t just Fitz. There are 11 guys on each snap, so the O-line played well. We got contributions from a lot of different guys – the offensive line, the backs, tight ends, receivers – everyone contributed and that is what you need to win in this league.”

“You know what you can add to that, which rarely [happens]?” Fitzpatrick said after the game when asked about throws, rushes, and receptions all in one game. “If you look at a lot of footage of me you will rarely see me slide and today, I also slid, so you can throw that one in there. That may not happen again all year so there were a lot of different things. That was my third career reception. I was glad I actually got positive yards on that one. But I think running and trying to throw a block here and there and getting hit, that stuff helps me get into the game a little bit.”

“Fitz is out of his mind,” tight end Mike Gesicki joked after the win. “He’s 38 years old and still playing this game like he’s 23, but to have him as our leader and for you to see the fun that he has – after I scored my touchdown we just came off to the sideline and just started yelling and screaming and chest bumping, it’s so fun to play with him. Whether it’s those plays where he refuses to slide and all that kind of stuff or the fun that he has or the experience that he shows to the guys around him, whatever it is it’s always great playing with him.”

Not counting Fitzpatrick’s reception, the quarterback threw passes to seven different receivers during the game, with DeVante Parker and Gaskin each catching five. Gesicki, who recorded a team record for tight ends 130 yards receiving last week, only caught one pass for 15 yards, but made it count as he found the endzone. Wide receiver Preston Williams caught two passes for seven yards, but also scored on one of the catches.

Fitzpatrick spoke about the ability to get multiple offensive players involved in the game early, and how they reflected on the fast start for the team as a whole. “It helps when everybody gets involved, not just focusing on one or two guys,” he explained. “We know that we have a lot of talent on offense and so we want to be able to spread that ball around a little bit and get different guys involved. As we go here, we’re figuring out strengths and weaknesses and really had to take advantage of some of those strength with our guys. We’ll continue to do that, and I think you’ll continue to see the ball getting spread around as the year goes on.”

The quarterback also reflected on the fast start, and the conservative nature of the second half, “I thought we had a really efficient first half. We came in the locker room a little bit disappointed on that last drive with the three-and-out, getting put in good field position and [hoping] to get another score on the board, but it was good. I felt like we were efficient today. We had a good game plan. We followed it. Guys made plays. The second half, [we were] running the clock out a little bit and that stuff, but I thought our guys, up front especially, came to play today.”

Gaskin, who is officially third on the Dolphins’ depth chart, has clearly become the team’s top running back. Jordan Howard, listed as the top runner on the depth chart, had three carries for one yard and a touchdown. Matt Breida, the second-string runner, carried the ball three times for four yards. Gaskin saw 22 carries for 69 yards, as well as the five receptions, picking up another 29 yards.

“I was just trying to make the best plays I could possibly make with the opportunities I was given,” Gaskin said of the workload. “The O-Line was making it real easy for me. Those guys did their job, they did a really great job today.”

Right tackle Jesse Davis gave the credit for the offensive line’s performance to the team’s plan heading into the night as well as Gaskin’s vision. “I think we had a good plan,” he said. “We knew what they were going to be lining up in and their answer to that was movement on the line trying to get our gaps. I think Myles Gaskin did a good job running hard, finding lanes and putting his shoulder down for extra yards and Fitz got a couple in there too.”

Flores also took a look at the offensive line during his media availability, stating, “I know a lot of the focus in on the rookies [left tackle Austin Jackson and right guard Solomon Kindley], but we take [left guard] Ereck Flowers, [right tackle] Jesse [Davis], those guys, all of them, I think these guys are competitive. There are tough and smart and it’s important to them. I think there is a lot of leadership in that room. The young guys just follow their lead. I think they understand that. That is a unit, not individuals but one unit and we try to play that way. We had some success early in the game – I wish we could have run it better from the second quarter on. It’s something we will take about and try to get improved tomorrow and this week. I like what I saw out of the group. I haven’t watched the tape yet so I am sure there is something we can coach and correct. By no means, was it a perfect game – I saw a couple of penalties which we will try to get those corrected. Hopefully, we are heading in the right direction.”

The defense came to play as well on Thursday, especially late in the game when the pass rush showed up for the first time this season. As a team, Miami recorded four sacks, including a Kyle Van Noy strip-sack, with the linebacker also recovering the loose ball, and a Kamu Grugier-Hill, whose eight tackles were tied for the team lead with Jerome Baker, fourth-down sack.

Flores explained the play call that led to Grugier-Hill’s sack, saying, “[Defensive Coordinator] Josh [Boyer] made a real good call on that. He blitzed them. Grugier-Hill came free and it is fourth down. It was a good play there because they had a little bit of momentum there at the half. We stopped them. It was a good play by Grugier-Hill. I thought he played well defensively. We called his number there and in the second half, he stepped up, made tackles and played fast. He along with a lot of other guys defensively – whether it was [Kyle] Van Noy, coaching, [Zach] Sieler. Obliviously X [Xavien Howard] had the [interception] at the end. It was a total team effort. We continue to build, to work as a team or a unit. We had contributions from different guys. We are not a one-man show here – no team is. We need contributions from everyone. Hopefully we can continue to improve and get better.”

“I think that’s a huge emphasis for us these last two weeks, especially after the losses, so getting that under our belt is awesome,” Grugier-Hill said of the success of the pass rush against the Jaguars. “We had a good short week of practice, but I mean it paid off and it’s exciting to see that.”

The linebacker also talked about the criticism of the Dolphins’ defense over the past two weeks. Miami was among the league’s worst in terms of nearly every defensive category. Grugier-Hill stated, “We’re a proud defense, proud team and anything that affects us is going to come internally, so we just had to look ourselves in the mirror really and just kind of find out what defense we want to be, and I think you saw that tonight. I’m excited for the guys. I’m excited for all of us and we have to continue that.”

The Dolphins will look to continue the success in all aspects of the game next week against the Seattle Seahawks in Miami.