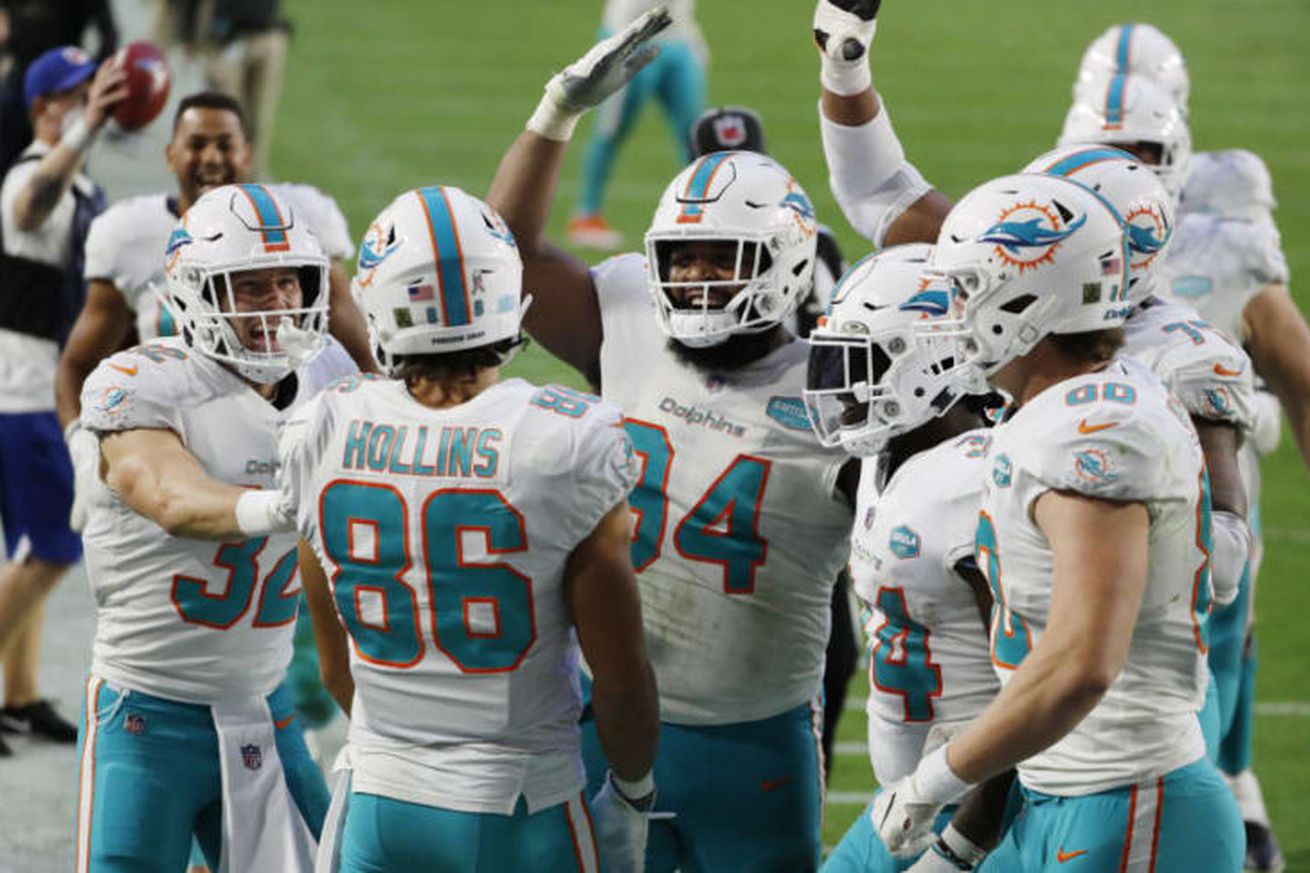 The 2020 NFL season feels weird, does it not? Perhaps we felt like this back in 2016 when the Miami Dolphins went on their run to make the playoffs. But, I do not even think it felt like this back then. The feeling I am describing is the feeling that the Miami Dolphins are a good team. A team, when playing lesser competition, is expected to win. I am not counting the New York Jets game from a few weeks ago when we all knew they would win. I mean teams like the Los Angeles Chargers and the following three weeks. The Dolphins should be favored in all of these upcoming games, assuming everything goes to plan (when does anything ever go to plan?).

Not only that, but this Dolphins team does not give me the depressed feeling I get before game time. It is that feeling that I know they are probably going to lose and will be lucky to be down just one score in the 4th quarter. That feeling is gone now.

The reasons for that are simple. Miami has a defense, they have a coach, and it certainly seems they have a quarterback. Forgive me for not saying that the 20+ years of quarterback drought since Dan Marino is over. I want to see more games before I crown Tua Tagovailoa as the savior. But that does not mean my overall feeling that this Dolphins team is not good. They are good, and they have everything in front of them during a season that most thought would just be another rebuild year. Good for the Dolphins and good for all of us.

The Chargers are not a typical 2-6 football team. I mean they are because that is what their record is. And you can also say they are the Atlanta Falcons of the AFC, somehow losing games they probably should win. That seems fair. The Chargers have lost by a combined 20 points in their six losses.

We know the book on them. Every week they have a double-digit lead in the second half, and then, poof, it goes away and they lose. Right now, it is in their DNA to lose. Miami needs to keep it that way.

The injury/covid report is a double-edged sword for the Dolphins.

The only positive of not having defensive end Christian Wilkins is that no Dolphin’s player should get injured celebrating a score. But not having him makes the Dolphins thin on the defensive front. It means Raekwon Davis and Zach Sieler are going to be relied on, probably, exclusively to fill the role left by Wilkins. With no Kyle Van Noy, expect to see more Kamu Grugier-Hill and Andrew Van Ginkel.

Of course, on the other side of that sword, the injury report hurts for the Chargers too.

Not having edge rusher Joey Bosa is huge for the Dolphins. The Chargers have one of the best fronts in the league. Not having him helps a Dolphins offensive line that is still figuring things out since Austin Jackson returned. That does not mean it will be a walk in the park. Melvin Ingram, Jerry Tillery, Linval Joseph, and Justin Jones are no slouches.

The Chargers are one of the teams that bring the least amount of pressure. They rely very much on their front four to take of that. You would like to think that will bode well for the Dolphins and their offensive line.

The secondary is where to attack the Chargers. They rank in the bottom third of the league in passing defense.

Their secondary only has four interceptions and quarterbacks are averaging a 95.7 rating. With their defensive line taking a massive hit, Tua and the offense should opportunities to do damage.

Also, upon further review, the Chargers are giving up 4.9 yards a carry. I’m not exactly sure who will be running the ball for the Dolphins. Matt Breida is questionable, Zach Crockett can’t see anything, and Salvon Ahmed, who’s intriguing, might only get four carries because of Brian Flores. Goes without saying, but it is nice if this was a game where the Dolphins out-muscled a team and used up the clock. Take some pressure off Tua and the banged-up receiving core.

I just remembered that Preston Williams isn’t playing. It’s going to be Parker, who really cannot get a case of the hammies, Grant, Lynn Bowden who returns, Perry and Hollins. That is not a group I want to go into a shootout with, yes I know they did it for a half last week. I still do not want to go that route every week.

One guy that I would love to be more involved is Mike Gesicki. Remember that guy? I do. He was wonderful for three weeks earlier in the year. Now he’s been relegated to Anthony Fasano territory and although I thoroughly enjoyed Fasano, I know Gesicki is capable of more. Offensive coordinator Chan Gailey needs to use his gifts of being an athletic freak and the fact that he doesn’t drop the ball when it gets to him.

The Chargers offense is sort of like the Dolphins. They can’t run the ball, though the Kalen Ballage revenge game is looming, so they throw a lot. I would expect the Dolphins to do more of the same on defense. More 0 coverage with bringing pressure. Herbert has been outstanding since Tyrod Taylor was injured. He has 17 touchdowns to only five interceptions in seven games. His receiving core is all right with Keenan Allen, who is due to get hurt, Mike Williams, and a bunch of guys who you never heard of. According to pro32.ap.org,

Herbert’s 121.3 passer rating against the blitz is third in the league, behind Kansas City’s Patrick Mahomes and Las Vegas’ Derek Carr. Herbert’s seven TDs in that situation are tied for fifth. He has been picked off only once and sacked four times.

Herbert has been good and we all have to come to terms that he is. He has been more than worthy of handling pressure but that doesn’t mean Miami should do anything different. The reason is that Herbert has not faced a secondary like the Dolphins’ secondary. Howard, Jones, and Rowe, yes Rowe needs to be mentioned as one of the main guys in the secondary, are lockdown guys that will not let receivers be as open as they typically are for Herbert.

Emmanuel Ogbah is on a mission to keep proving folks wrong who passed on him thus making life difficult for Herbert. I like Miami’s chances to get to Herbert but bringing him down will not be easy. Herbert has not run a ton but we know he is mobile. He can move well but he just has not done it yet. Sunday cannot be the day he starts doing that. He is not Kyler Murray but he can keep plays alive and pick up first downs if has too.

The Tua versus Herbert subplot will be fascinating. A lot of talk was that the play of both Herbert and Cincinnati Bengals rookie quarterback Joe Burrow play led to Flores inserting Tua in the offense when he did. I never subscribed to that theory but it is out there.

Tua is coming from an excellent performance against the Cardinals where he did it all. His arm and legs were on full display. His accuracy and anticipation were showcased and he executed the offense near flawlessly. He’s going to be able to do that again because there’s no reason to think the running game will help him out.

The Dolphins are 1.5 favorites and as I said should be favorites for the next month. We’ve seen all week all the talking heads that doubted Tua, Flores and this back peddle a bit on their hot takes about Miami being misguided about their decision making. The Dolphins are playing with a swagger not seen in decades. It is a swagger that says we know we are going to win. I love it.

This would be a trap game if the Dolphins had a good opponent next week but we don’t. The cliché to use would be let down game. Miami had a big emotional win last week so you can see a world where they come out flat against the visiting Chargers.

I think it is possible they start slow but also take care of business and win.

Miami wins a game where they are in control of the whole game. We’ll be saying the Chargers were never really in it and that score makes it seem closer than it was. That’s fine with me.

Enjoy your weekend. Crockpot chili for the game. It is finally cold enough to warrant chili in northeast PA and that’s what I’m doing.