3:29pm: That was fast. Dorrell has accepted Colorado’s offer to replace Mel Tucker, Ian Rapoport of NFL.com tweets. This will be Dorrell’s first HC gig since he coached UCLA from 2003-07. The Dolphins promoted Dorrell to assistant head coach this week. 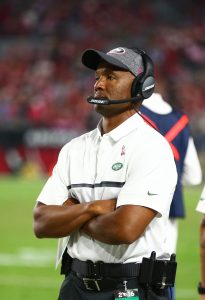 3:26pm: Karl Dorrell coached at the NFL level for most of the 2010s but has experience as a college head coach, having served in that role at UCLA for five years in the 2000s. The Dolphins’ wide receivers coach is back on the college radar.

The second-year Dolphins assistant emerged as the favorite for the Colorado job on Saturday, according to Yahoo.com’s Pete Thamel (on Twitter). Dorrell, 56, enjoyed multiple stints with the Buffaloes, serving as their offensive coordinator from 1995-98 and wide receivers coach from 1992-93. The third will become the UCLA alum’s most memorable Boulder stay.

Colorado reached out to Chiefs OC Eric Bieniemy, but despite multiple overtures, the university could not pry him from Andy Reid‘s staff. Recently hired Giants assistant Bret Bielema was also a candidate, but Thamel notes the university has informed “numerous” coaches they are no longer in the running. That could well include the ex-Wisconsin and Arkansas coach, whom the Giants hired last month.

Brian Flores brought Dorrell to Miami last year. He’d spent the previous four seasons on Todd Bowles‘ Jets staff, coaching wideouts. The 56-year-old assistant is in his second stint as a Dolphins assistant. He served as Miami’s receivers coach from 2008-10 and coached Dolphins quarterbacks in 2011. Dorrell’s most noticeable contribution to the Dolphins came in DeVante Parker‘s long-awaited breakout. The ex-first-round pick enjoyed by far his best NFL season in 2019, and the Dolphins rewarded him with a long-term extension.