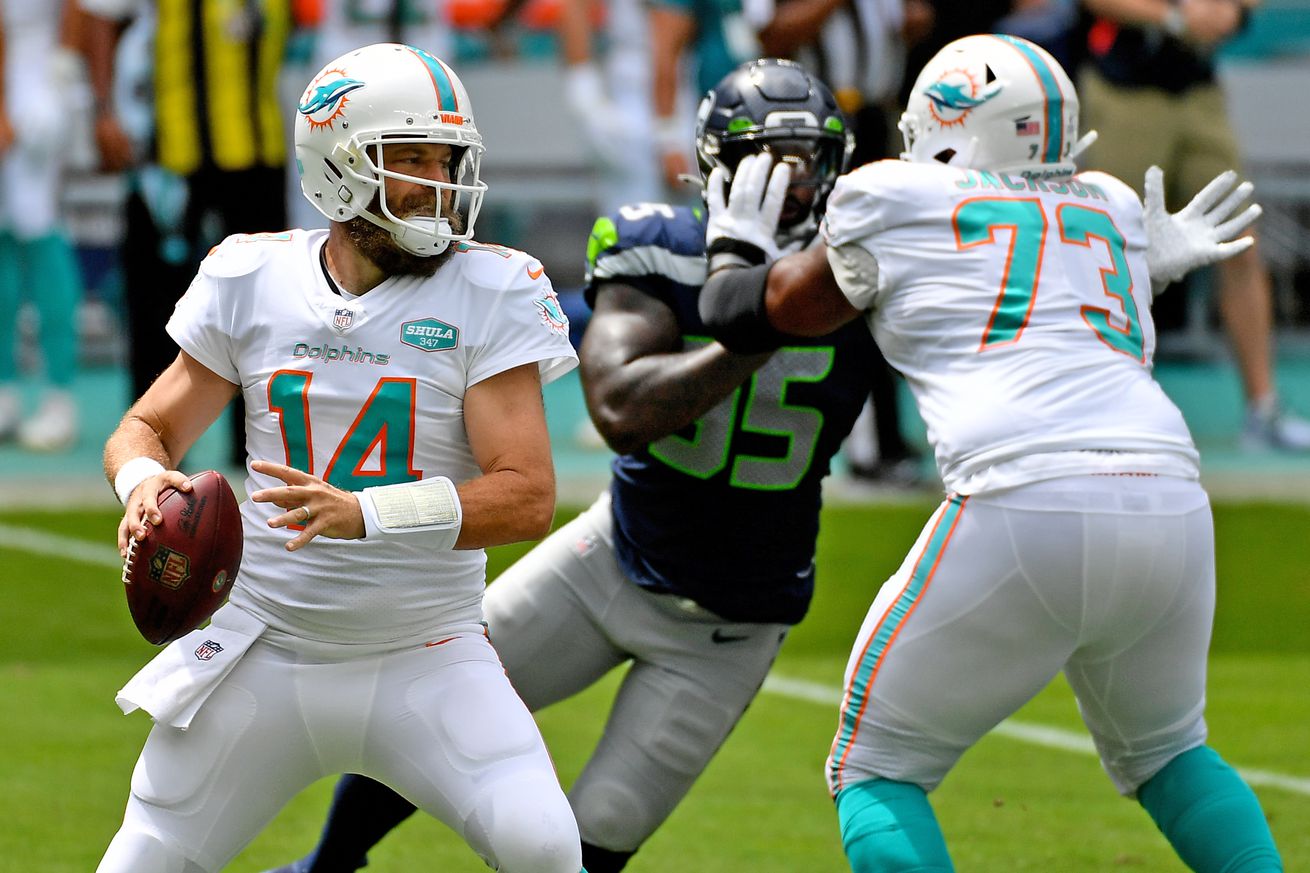 The Miami Dolphins entered the 2020 NFL season with four of the team’s five starting linemen new to the team, including starting rookies at left tackle and right guard. In a year with no offseason training program, nor any preseason games, a steep learning curve would be the norm for a line with 80 percent new starters, where right tackle Jesse Davis remained as the only incumbent from 2019.

There have been hiccups during the first four games of the year, but the line continues to grow and play well. Improvement is needed, especially in run blocking, but as a whole, the line appears to be working itself into a solid unit – something Miami has needed for years.

On Sunday against the Seattle Seahawks, Dolphins’ left tackle Austin Jackson, the 18th overall pick in this year’s NFL Draft, was forced to leave the game twice with a foot injury. Miami played Julién Davenport in his spot.

“You’re always trying to identify what guys do well and how they play,” Dolphins offensive coordinator Chan Gailey said after the game of Davenport’s play. “Then you look at the amount of experience that somebody has and then you look at the amount of potential that somebody has. You’re trying to weigh at all of those things when you’re making decisions about who is going to play in a ballgame – who has shown what in practice. As we look at Julién, he was really in there at the end of the game and it was almost all pass sets. That’s something that he does very well. He did pretty good as far as that goes. We’ll evaluate all of the guys that we have and make a decision sometime this week about the direction that we’ll go.”

Wednesday morning, head coach Brian Flores looked at Davenport’s play from Sunday, as well as updated the status of Jackson heading into this week’s contest against the San Francisco 49ers. “I thought Julién played well last week when he went in there for Austin,” he stated. “I thought he played well. I thought he did a really good job. Austin, as far as practice, he won’t be out there today. Hopefully – he’s still kind of working through some things but hopefully tomorrow, we’ll see. So just from that standpoint, you won’t see him today. But Julién played well. Yes, we’ll always try to play the five best guys. Obviously Julién will be part of that – Rob Hunt will be part of that – conversation. Again, we’ll see how this goes throughout the practice week and we’ll take it from there.”

“Austin has had a great start to this season,” offensive line coach Steve Marshall said on Tuesday when asked about Jackson’s development through four games. “I think he’s learning every time he’s gone out there. I’m very, very excited for his future and I think he can be a heck of a pro offensive left tackle.”

A lot of the discussion this week about the offensive line and how they are growing targeted guard Ereck Flowers, who Miami signed in free agency this offseason. Flowers has become a leader for the position group, with Gailey discussing that role on Tuesday. “He’s having a very good start to the season,” Gailey explained. “He is a calming influence on the line for us. He’s very competitive on gameday but very quiet during the week. He’s very calm and really very professional about the way he goes about his business. I’ve been very happy with what he has brought to us, not only on the field playing, but blocking, run game, pass game, (and) what he brings as a leader to our offensive line.”

Marshall also discussed Flowers, as well as Davis and center Ted Karras, and the leadership they have provided in developing the younger players in the group. “Ereck Flowers is a quiet man from talking; but when he does talk, he’s an experienced player,” Marshall stated. “He’s been through some ups and downs in his career, and he’s – Ted and Jesse and Ereck – you guys have asked a lot about the young guys, but the real credit goes to those guys as far as helping young guys, and Ereck is certainly leadership-wise, and he does it with his play. He has played very well his first four games, and I think he’s done well and he’s exceeded expectations, and we’re going to count on him moving forward as we are the rest of the guys.”

Marshall then added Davenport to the discussion, saying, “Julién is another guy – a quiet guy. He’s been around the block. He’s in I think his third year, fourth year in the NFL, and came in and played in a tough situation. We were down, we had to throw it and he did a nice job. He’s a smart guy – very intellectual guy and has really worked hard to improve on some of the things we talked about in the offseason, and going forward we’re going to count a lot on Julién.”

The Dolphins’ sixth-man for the offensive line has been rookie Robert Hunt, who has lined up as a tackle eligible in each game this year. A second-round pick out of Louisiana, Hunt could be playing himself into more snaps this year. Marshall discussed Hunt’s role and future on Tuesday, explaining, “Rob has been – he’s in there because he’s a big, strong man, and he has done a great job. He gives us a matchup where he can handle defensive ends and things like that because of his athleticism and run blocking. Rob’s right there. Rob – we’ve got Jesse (Davis) and Austin (Jackson), and Rob’s right there. It’s not anything Rob isn’t ready to handle, but he’s a young player and he’s worked extremely hard here in practice. We’ll see moving forward, but I think the sky’s the limit for the guy. I think he’s a tough guy and he’s learning the pro game, which how do you learn it? You get out and play at this position, like we’ve talked in the past. It’s a repetition position, and he’s performed well in the limited time he had, and moving forward, I see him – we’re counting on him heavily quite a bit moving forward.”

On Wednesday, Flores was asked about the possibility of getting Hunt playing time at right tackle and moving Davis to left tackle with the Jackson injury, or even possibly putting Hunt in at left tackle. The coach replied, “Robert can play left tackle. I would feel comfortable playing Jesse at left tackle. I’m also comfortable playing Julién at left tackle. We’ll just see how the week goes. Thankfully we have some guys we feel good about going in and playing left/right (tackle). All of those guys have played both positions. But at the same time, we’re going up against a very aggressive defensive line and a very, very good defense. This will be a tough, tough challenge. But we’ll see how this goes over the course of the week. I’m not saying Austin is out of the question either. Let’s just take it one day at a time. But yeah, I’m comfortable with all of those guys playing really left or right. I think Steve (Marshall) will do a good job of getting them ready. We’re going to need to play well from an o-line and really a team standpoint against this team. They’re very good.”

Marshall, the day prior, had also discussed the possibility of making adjustments to the starting line if Jackson proves to be unavailable. “That remains to be seen,” he stated. “I think that the philosophy always is, especially in this league and especially – you’re working every day to get your best five guys on the field and there’s no question about that. that’s why going through all the OTAs and the offseason – of course, we didn’t do OTAs this year, but the early camp and things like that, is to put guys in different positions to handle any kind of situation that comes up. It’s a collision sport and some guys get nicked up and you’ve got to try to do your best to get your best five guys on the field to give you the best chance to win. That’s why we practice and we meet long hours is to make sure that we’re in a position to do that when we have to obviously, which is probably 100 percent of the time that we’re trying to get the best five guys on the field at all times.”

Miami is 1-3 to start the season, though their three losses have come by an average of a touchdown and were to three teams that appear to be playoff-caliber teams this year. The team is still 1-3 on the year, no matter how close the games, but it does not feel they are that far away from adding to the win column. Center Ted Karras discussed the team’s morale after the 31-23 loss to the Seahawks, “Well, I say it all the time. It’s an old adage that I got from one of my favorite coaches I’ve ever had: Nothing breaks our spirit. We’re out there fighting and we’re 1-3 in close games and that sucks. But we’re just going to keep fighting, keep grinding. The only way is to work your way out of it. So show up tomorrow ready to work and get ready to play San Fran.”

The Dolphins will look to get their second win this Sunday against the San Francisco 49ers. The offensive line, and its continued growth even as they potentially start adjusting the starting line. will be a big focal point for the game.