The Dolphins may be without two key defenders against the Chargers on Sunday. The team placed Christian Wilkins and Kyle Van Noy on its reserve/COVID-19 list. 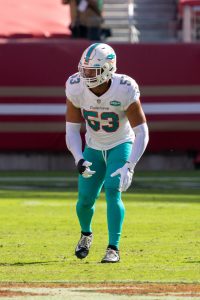 While the Dolphins removed rookie Lynn Bowden Jr. from the COVID list on Thursday, practice squad wide receiver Matt Cole landed on it as well. A Dolphins staffer tested positive for the coronavirus last week. It is not known if Wilkins and Van Noy’s Thursday designations are related to that case. Van Noy’s placement stems from contract tracing, Barry Jackson of the Miami Herald tweets.

Unless Wilkins and Van Noy last came in contact with someone who tested positive prior to Tuesday, they will be forced to miss the Dolphins’ Week 10 game. The NFL requires high-risk close contacts to isolate for five days. This would certainly affect Miami’s hopes at winning a fifth straight game.