Tua Tagovailoa will be under center tonight when the Dolphins take on the Bengals. The team announced on Twitter that Tua will be active for Thursday Night Football. 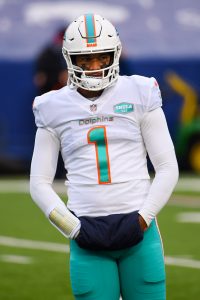 [RELATED: Latest On NFL’s Investigation Into Handling Of Tua Tagovailoa]

Tagovailoa has been dealing with back and ankle injuries stemming from Miami’s Week 3 win over the Bills, with the QB later admitting that his back has been most troublesome. He went through limited practices on Tuesday and Wednesday in preparation for tonight’s game.

Tua was injured while attempting a QB sneak on Sunday, and he exited the game on the next play after Matt Milano shoved him to the ground. The QB hit his head and stumbled on to the field before heading for the sideline, prompting him to enter concussion protocol. He ended up returning and finishing the game, and while the NFL’s subsequent investigation is ongoing, it appears that the organization followed the proper protocols.

The 24-year-old has lived up to expectations during his third season in the NFL. Through three weeks, Tagovailoa has compiled 925 passing yards, eight touchdown passes, and only two interceptions while guiding Miami to a 3-0 start.

If Tua was forced to miss any time, the Dolphins would be in good position to temporarily replace his spot in the lineup after inking Teddy Bridgewater this offseason. Seventh-round rookie Skylar Thompson is also on the active roster, and it sounds like all three QBs will be active for tonight’s game.