Hours away from their training camp’s outset, the Dolphins have all but one of their rookies signed. They came to terms with third-round pick Hunter Long on his four-year deal Monday. 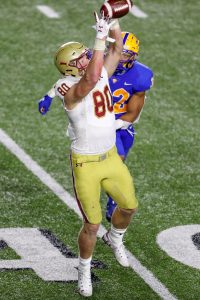 The No. 81 overall pick, Long played three seasons at Boston College and declared for the draft after his junior year. The rookie tight end will follow ex-teammate Tommy Sweeney into the NFL (and the AFC East, with Sweeney on the Bills) and continue BC’s tight end pipeline to the league.

Following Sweeney’s exit, Long took over as the Eagles’ top tight end. He averaged 18.2 yards per reception (509 total) as a sophomore and set a new career-high with 685 yards in the pandemic-truncated 2020 slate. Long caught 57 passes and added five touchdowns last season, paving his way to the draft’s second day.

The Dolphins have now drafted tight ends on Day 2 in two of the past four drafts. Incumbent Mike Gesicki, a second-rounder out of Penn State in 2018, is entering his contract year. Despite finishing fourth among NFL tight ends with 703 receiving yards in 2020, Gesicki is not believed to have surfaced on the Dolphins’ extension radar just yet. He will team will Long this season.