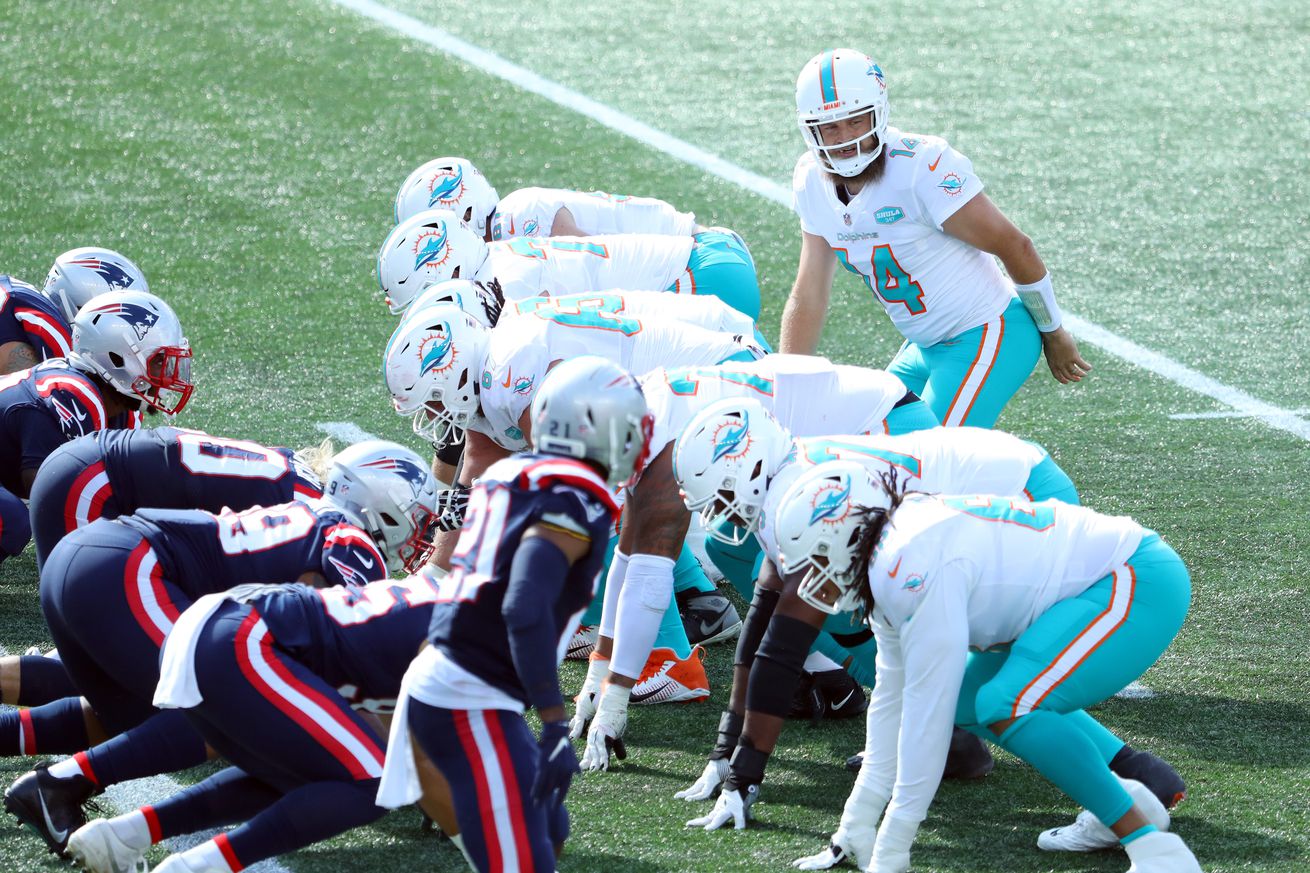 The Miami Dolphins lost to the New England Patriots last Sunday, dropping to 0-1 on the season in a game where they were surprisingly still in contention late. Throughout the game, it felt like the Patriots were simply dominating the Dolphins, especially as their rushing offense continued to pound away at Miami’s defense, but somehow, Miami seemed to stick around until a final interception in the endzone with 1:28 remaining erased any hopes of a comeback.

A 21-11 loss hurt, especially when there was hope the Dolphins could back up their 2019 Week 17 win in New England by doing the same thing to open the 2020 season. It was one loss, and the Dolphins were not blown out on the scoreboard (compare it to last year’s Week 1 loss 59-10 to the Baltimore Ravens or 43-0 loss to the Patriots in Week 2 last year, and this was clearly a much better loss), but it still did not feel like Miami was in the game all that much.

There were some positives from the game, however. To get one last look at last week’s game before we dive head-first into Week 2, it is time for some stock watch ratings from the game.

Stock up: Dolphins offensive line – By no means was the offensive line perfect, but when four of your five starters have never played a game for your team, two of them are rookies including the left tackle, and the only work they have done as a unit has been in practice this summer with no preseason games, they did okay. They have to do a better job in run blocking, and pass protection was not great but it was a good first time together as a unit. This is not saying the offensive line issues have been completely solved and everything is golden, but the stock has risen some.

Stock down: Ryan Fitzpatrick, quarterback – Fitzpatrick was not Fitztragic nearly as badly as some of the reactions have been, and he should not be benched for Tua Tagovailoa yet, but it was not a great performance either. Two of his three interceptions can be explained, with the intended receiver Preston Williams falling down on one throw just as Fitzpatrick let go of the ball, allowing Stephon Gilmore to pick off the pass, and the other coming as tight end Mike Gesicki was mugged in the endzone, never allowing him to have a chance at the ball. That said, Fitzpatrick had some moments that left fans scratching their collective heads. The biggest issue may just be that the offense never seemed to find the rhythm it had in the second half of last season. Fitzpatrick’s stock slides down because the offense just struggled during the day.

Stock up: Preston Williams, wide receiver – Williams did not have a stellar day, only recording two receptions on seven targets for 41 yards, but the fact that he was able to get onto the field and play as much as he did gets his stock rating moving up. There is a lot of production still to come from Williams before he looks like a break-out candidate again, but he was on the field for 90 percent of Miami’s offensive plays just ten months and ten days from tearing his ACL. He will become more effective, but it was a good start that he was able to play as much as he did.

Stock down: Dolphins rush defense – I almost did not put the rush defense on the list because, after 2019, it is hard to say the stock of the rush defense could go down any more. It was just bad on Sunday, though, and so it makes the list. It looked like the Dolphins just did not expect the Patriots’ offense to be so drastically different with Cam Newton at quarterback as compared to the last 20 years with Tom Brady. They had no answer for Newton running, and it crushed them.

Stock up: Brandon Jones – Jones was not great, but a rookie making ten tackles in his debut game is worthy of note. The Dolphins used him as a strong safety, a role that he will need to grow into quickly if Miami’s rush defense is going to get better, but he was expected to be behind Bobby McCain and Eric Rowe on the depth chart, and instead started alongside McCain. That gives your stock a push up.

Stock down: Jordan Howard – What happened to Miami’s starting running back? The same could be asked of Matt Breida, who did not see the field until mid-way through the second quarter, but Jordan was on the field early, then disappeared, then came back to score the Dolphins’ touchdown. In total, however, he had eight carries for seven yards. That is a rough outing for your starter at the position.