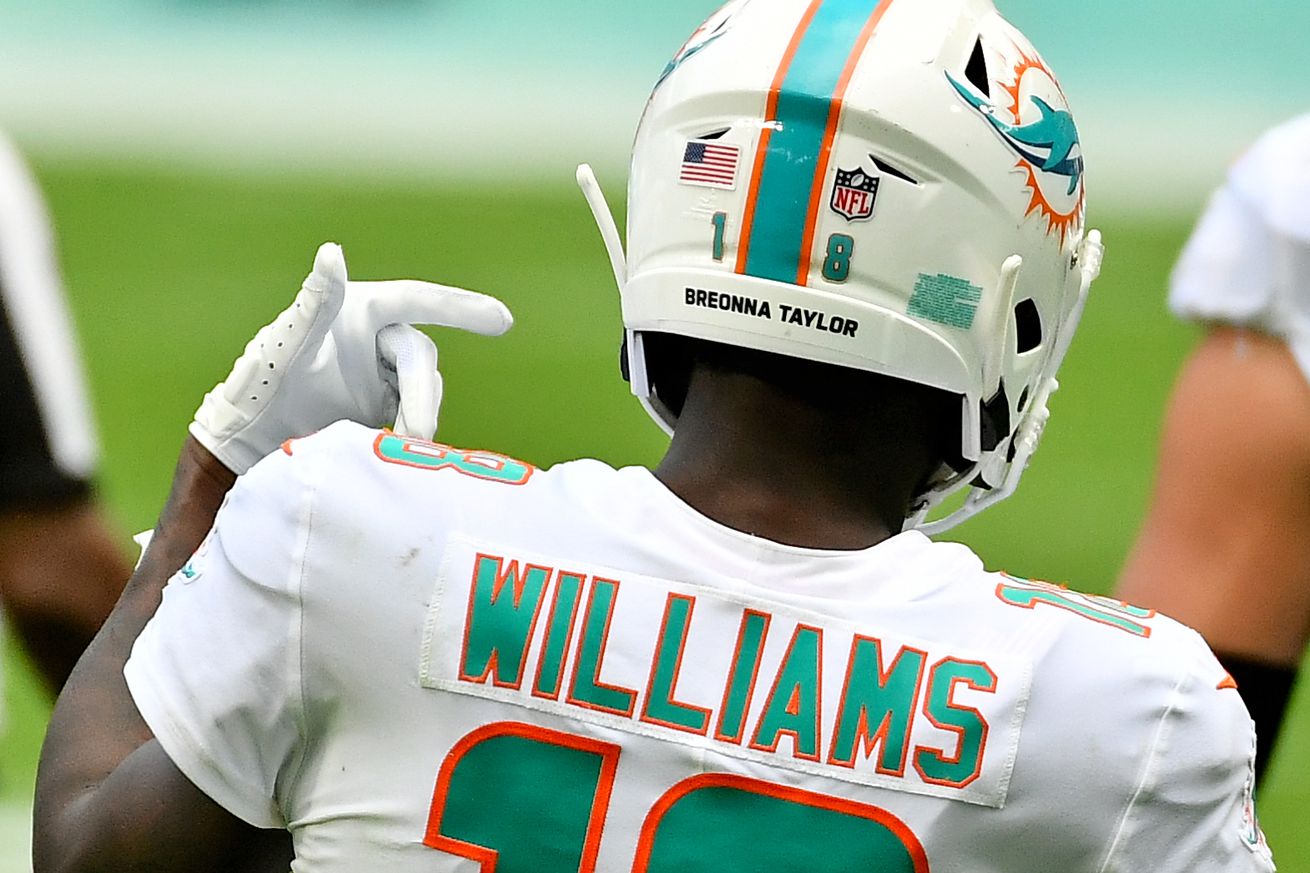 Miami Dolphins wide receiver Preston Williams will be placed on injured reserve, according to head coach Brian Flores. The move comes after the second-year receiver appeared to injure his foot in the second quarter of the team’s win over the Arizona Cardinals last weekend. Williams was limping off the field after scoring a touchdown and went into the sideline medical tent. He was then carted into the team’s locker room.

“We ran some tests,” Flores said during his Wednesday Zoom session with the media. “Preston, he’s going to go to IR, so it’s a little bit more significant than we initially thought.”

There is some confusion on the injury, as it is unclear when it happened or exactly what is injured. During the play, Cardinals safety Jalen Thompson rolled with Williams’ left leg, but then Williams appeared to be favoring the right foot after defensive tackle Christian Wilkins jumped on Williams’ back during the touchdown celebration.

On Monday, Flores seemed hopeful that Williams’ injury would not have a long-term impact. “With Preston, we’ll just take that day by day,” the coach said. “We’re still kind of evaluating that situation. But he’s a tough kid. He’ll try to fight through things and we’ll see how that one goes.”

When asked how Williams was injured, with the possibilty that it came during the celebration after the touchdown, Flores replied, “I’m not much on social media, so I don’t know what’s on there or what’s not on there. Preston obviously had an injury. He didn’t return. Honestly, when or how it happened – I don’t think that’s what happened. How it happened? That’s not on the coach’s copy, but it looked like it was during the play, based on what I saw. But I don’t know. Maybe it was somewhere else. Obviously some other people saw something else. I think the thing is that he suffered an injury and hopefully – look, he’ll do everything he can to get back and we’ll just evaluate it day to day and take it one day at a time.”

Williams returned to the Dolphins this year after a torn ACL ended his season last year – also occurring in Miami’s eighth game. With changes to the injured reserve list this year, if Williams is able to recover from the injury, he could return as soon as the team’s game against the Cincinnati Bengals in December, missing games against the Los Angeles Chargers, Denver Broncos, and New York Jets. Under the updated IR rules, teams are allowed to bring players back from IR after they have been out for three weeks.

This season, Williams has caught 18 passes for 288 yards with four touchdowns. He has not been as consistent this year as he was through eight games last year, where he caught 32 passes for 428 yards and three touchdowns, but he was showing flashes of returning to form. He had four receptions for 60 yards and a score against the Cardinals prior to the injury.

Asked about how the team will adjust with Williams out and if the younger receivers like Lynn Bowden, Jr., should expect to see a jump in playing time, Flores explained, “It’s a big loss. Preston has made a lot of plays for us over the first half of the season; but we’ve got guys who will step in. Jakeem (Grant) stepped in for him last week. Mack Hollins stepped in and had a big play. Kirk Merritt was up last week, played well in the kicking game, played a little bit offensively. And you mentioned Lynn (Bowden Jr.). So yeah, I think it’s kind of how we have to approach this.”

He continued, “Nothing changes on our end, from that standpoint. I don’t think you can just say, ‘Hey, somebody went down so you go from playing 10 plays to playing 60 and that’s how it goes.’ We’ll try to split the reps in some form or fashion. I think some of the guys who have already been up and practiced in some of those roles – like I’ve mentioned, Jakeem, Mack Hollins, Malcolm Perry has been in there a little bit. I think to mix those with the young guys, there are a few different way we can do this. You don’t have to just put one grouping in there. We’ve got some tight ends who can play, we’ve got some backs who can play. You can only play 11 at a time, so it doesn’t have to be three and four wide receivers. I think everyone expects it to show up that way, but it doesn’t necessarily have to be that way. I think we can handle that with the rest of the team. Again, it’s a team game. We’re going to need the tight ends, the backs, the receivers – like I said, it’s a different year. It’s a year of COVID. We’ve had some other teams who have been down multiple people at positions and not play. You adjust. We’ll adjust if we need to.”

The Dolphins face the Chargers without Williams at 4:05pm ET on Sunday from Miami’s Hard Rock Stadium.