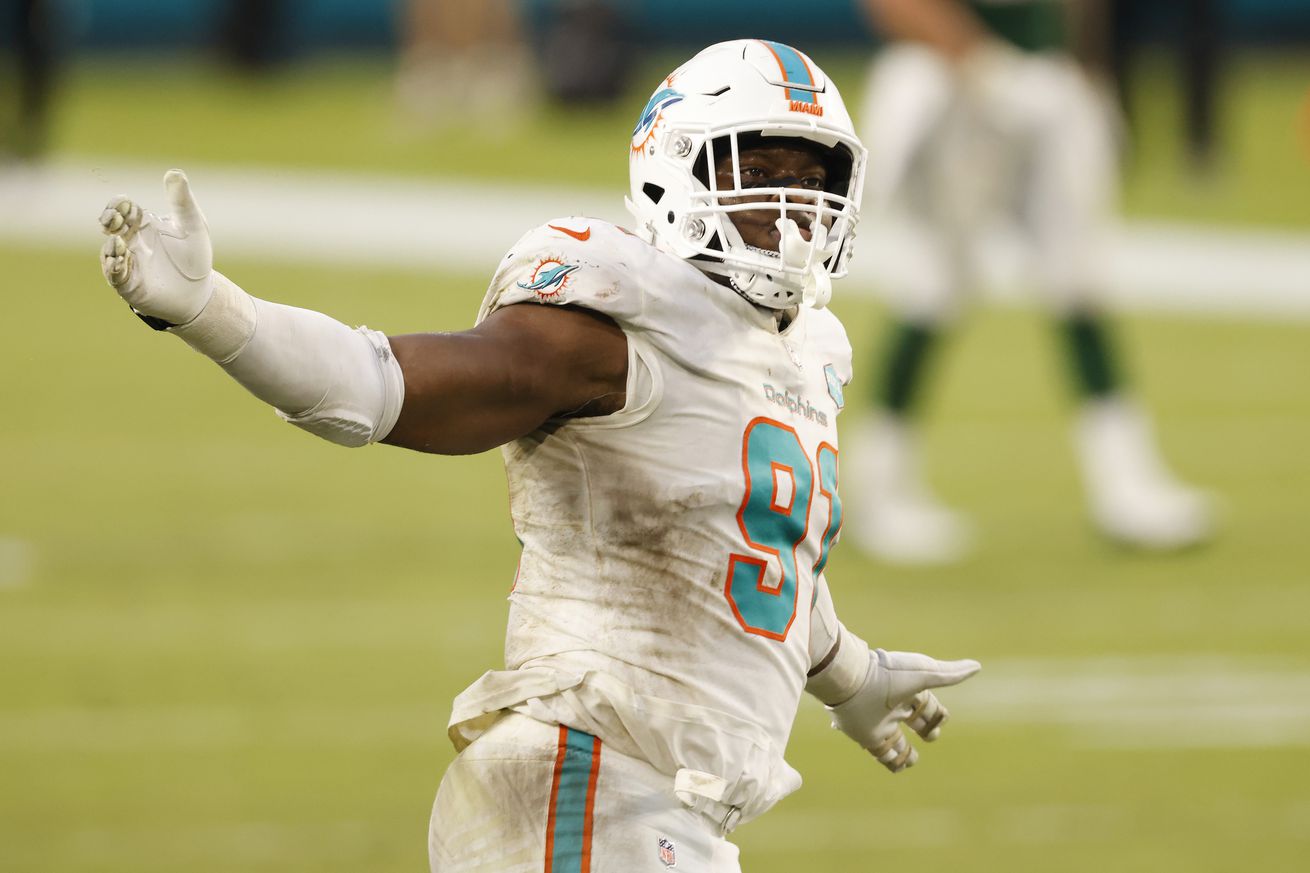 In 2019, the Miami Dolphins defense was among the worst in the NFL at getting pressure on the quarterback. It was bad and played a large role in Miami’s poor defensive play down the stretch.

For comparison sake, through 8 games in 2020, Josh Boyer’s defense has totaled 20 sacks, and as we’ve become accustomed to over the last decade, the Dolphins most feared pass-rusher is the man wearing #91.

However, this time, instead of the words “WAKE” proudly stitched across his back—it reads “OGBAH.” Sure, it’s impossible to compare the two considering one has only played in eight games with the Dolphins, while the other has had his name etched among Miami greats. But these two players are much more alike than the number on their back. And maybe that’s something we should’ve expected.

ogbah says he used to watch a bunch of cam wake highlights before games.

I mentioned Miami’s inability to pressure the quarterback as an Achilles heel a year ago, but equally as problematic was their inability to set the edge. So what did Chris Grier and Brian Flores do? Open Stephen Ross’ checkbook and sign two players that can do a little bit of everything in Shaq Lawson and Emmanuel Ogbah.

This article isn’t about Lawson. And you should already know my feelings on him dating back to pre-draft 2016.

But back to Ogbah. The unstoppable beast can do a little bit of everything, and that’s why the Dolphins brought him here this offseason.

“Well, this is a multiple role defense so some plays I’m an edge, some plays I’m a d-tackle. That’s why I’m here because I’m able to play both positions and be good at it, so that’s one of the reasons they brought me in because of my versatility. I’m just doing my job and doing what I’m asked to do.”

Before we get into how disruptive Ogbah has been in the backfield, let’s look at some of the things he can do in the run game. Both plays were from the Seattle game a few weeks ago, and although the Dolphins did not defeat the Seahawks, they held their own for a majority of the game.

emmanuel ogbah came to play on sunday. here he moves the RT with ease before stopping chris carson in the backfield. pic.twitter.com/vi7X26CgVN

Before we get into how disruptive Ogbah has been in the backfield, let’s look at some of the things he can do in the run game. Both plays were from the Seattle game a few. There are many other examples of him setting the edge and making plays vs. the run, but as you would expect with Brian Flores’ player, he’s much more than a one-trick pony.

For 18 months, the word you continue to hear from the coaches and staff surrounding most Dolphins defenders players is versatility. And where as the aforementioned Wake may not have been known for his impact on the run game. Or his ability to set the edge, but that is where Ogbah has been at his finest. But those numbers remain hollow and empty to most onlookers, and the only thing that truly matters is how much destruction a player causes in the backfield. And Emmanuel Ogbah has been creating nothing but destruction since the ink dried on his two-year, $15-million contract.

Emmanuel Ogbah has been having a breakout season!

Most impressive is the variety of ways Ogbah has got to the quarterback. His toolbox has just about every move in the book, and he’s shown it time and time again throughout the year.

I could sit here and tell you about Ogbah’s speed around the EDGE or his lightning-quick hands in which he uses to shed blocks, but if you’re like me, you’re a visual learner. So here is a visual aid that should help you understand why the 27-year-old pass-rusher is having the best season of his NFL career.

Without further ado, here is every sack (7 total) from the first half of Emmanuel Ogbah’s 2020 season.

ogbah has a sack in his last 7 games. pic.twitter.com/BROQKNojRk

After eight games, I think it’s safe to say Emmanuel Ogbah has been everything the Miami Dolphins have hoped for and more.