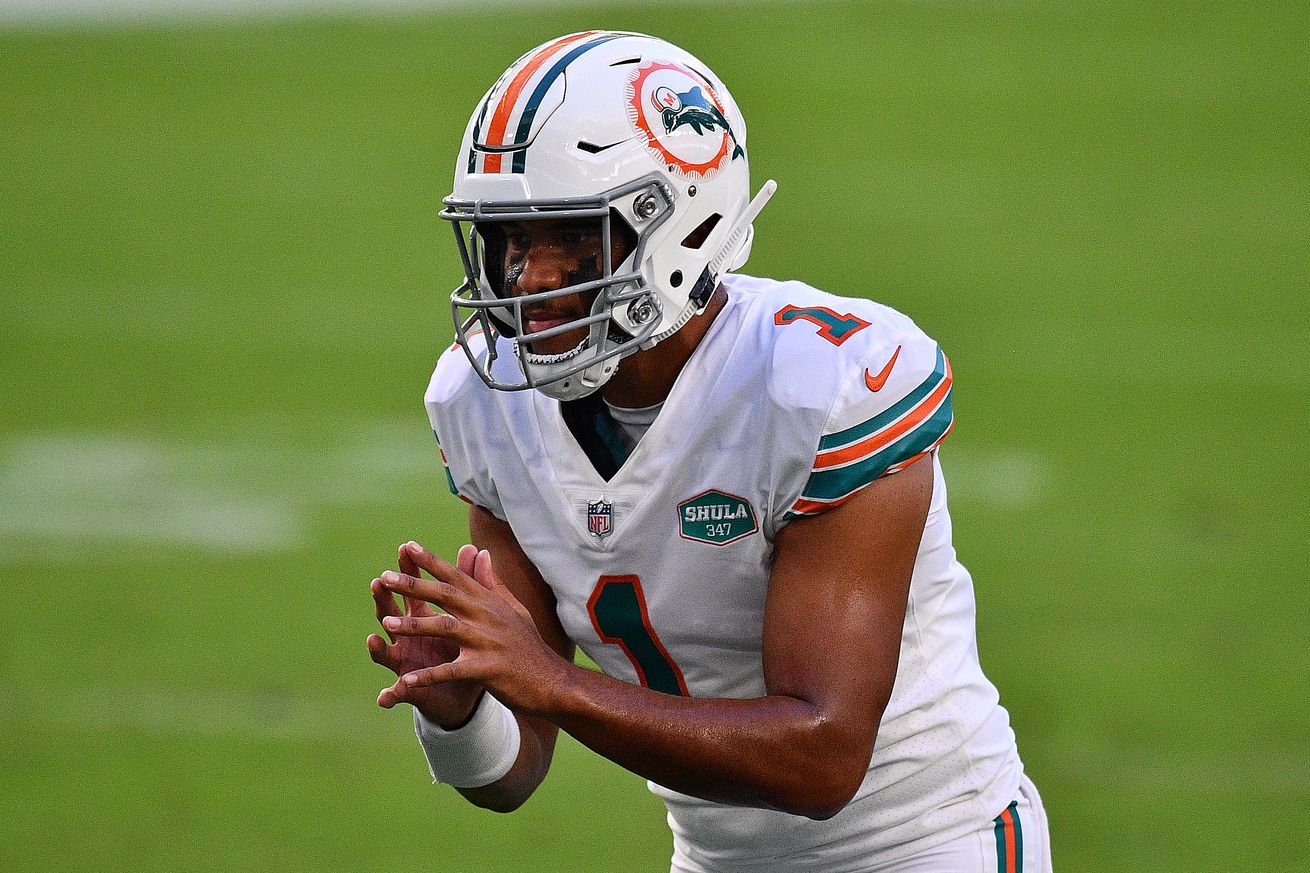 Last week vs. the Arizona Cardinals, Tua Tagovailoa completed 20/28 passes for 248 yards and two touchdowns. Most importantly, the Dolphins won the game.

Well, for the fifth straight week, the Dolphins and their fans are enjoying a well-deserved victory Monday. And although his numbers weren’t as impressive as last week—or as dismal as his first-career start—Tua Tagovailoa continued his path to perfection, leading the Dolphins to a 29-21 victory over Justin Herbert and the Los Angeles Chargers.

-he is the only QB in #dolphins history to not throw an interception in first 3 starts. pic.twitter.com/cloUWO6esT

Yes, I know; you would be a fool to compare Dan Marino to Tua Tagovailoa after only three career NFL starts.

Same as you would Justin Herbert to Tagovailoa, because as we saw on Sunday, these two teams couldn’t be more different. Nevertheless, all the talk will inevitably be about Herbert’s hollow stats and how much nicer they may look (on paper) than Tua–but who cares?!

Tua Tagovailoa is the real deal.

And for the third time in his NFL career, he led the Dolphins offense victory.

It wasn’t all perfect for Tagovailoa.

He threw a questionable ball to DeVante Parker in the back of the endzone that was ruled incomplete. Tagovailoa also threw a near interception to Mike Gesicki that was knocked around like a hot potato. And then this throw, which I’m just going to pretend was traveling faster than that Randy Johnson fastball that disintegrated a seagull once.

But what we continue to see from one week to the next is steady improvement. And whether that be with his command of the huddle or his ability to make plays that we haven’t seen from a Miami quarterback in decades, Tagovailoa appears to be everything the Dolphins have hoped and more.

Most impressive is the way he’s doing it.

Miami’s starting running back Salvon Ahmed was an undrafted free agent and his receiving corps isn’t nearly as explosive as it was at Alabama. Which, ironically enough, was one of the biggest faults of Tua, remember?

Tua is making plays equally as impressive as the other rookie quarterbacks. But what he’s been able to do that neither Herbert nor Burrow have accomplished is consistently win football games.

I should probably make a note at how good Tagovailoa’s accuracy has been—especially with those short and intermediate passes that Chan Gailey’s offense utilizes so well. Here’s what Tua had to say about the offense.

“To be honest, I think (Offensive Coordinator) Chan (Gailey) is just finding ways to put guys in certain areas or certain positions to become successful. We’re trying to put guys defensively in a bind to where we can take advantage of them. I think up to this point, we got to continue to execute on those things, but it’s still a work in progress, so we’ll continue to look at the film when it comes time tomorrow and continue to grow from there.”

It may only be three games, but Tua Tagovailoa has been as advertised and is a large part of the reason to why the hype surrounding the Dolphins is at an all-time high. Can the team’s success continue? No one knows.

But one thing is for certain, for the first time in 20 years the Miami Dolphins have a quarterback they can feel confident in building around.