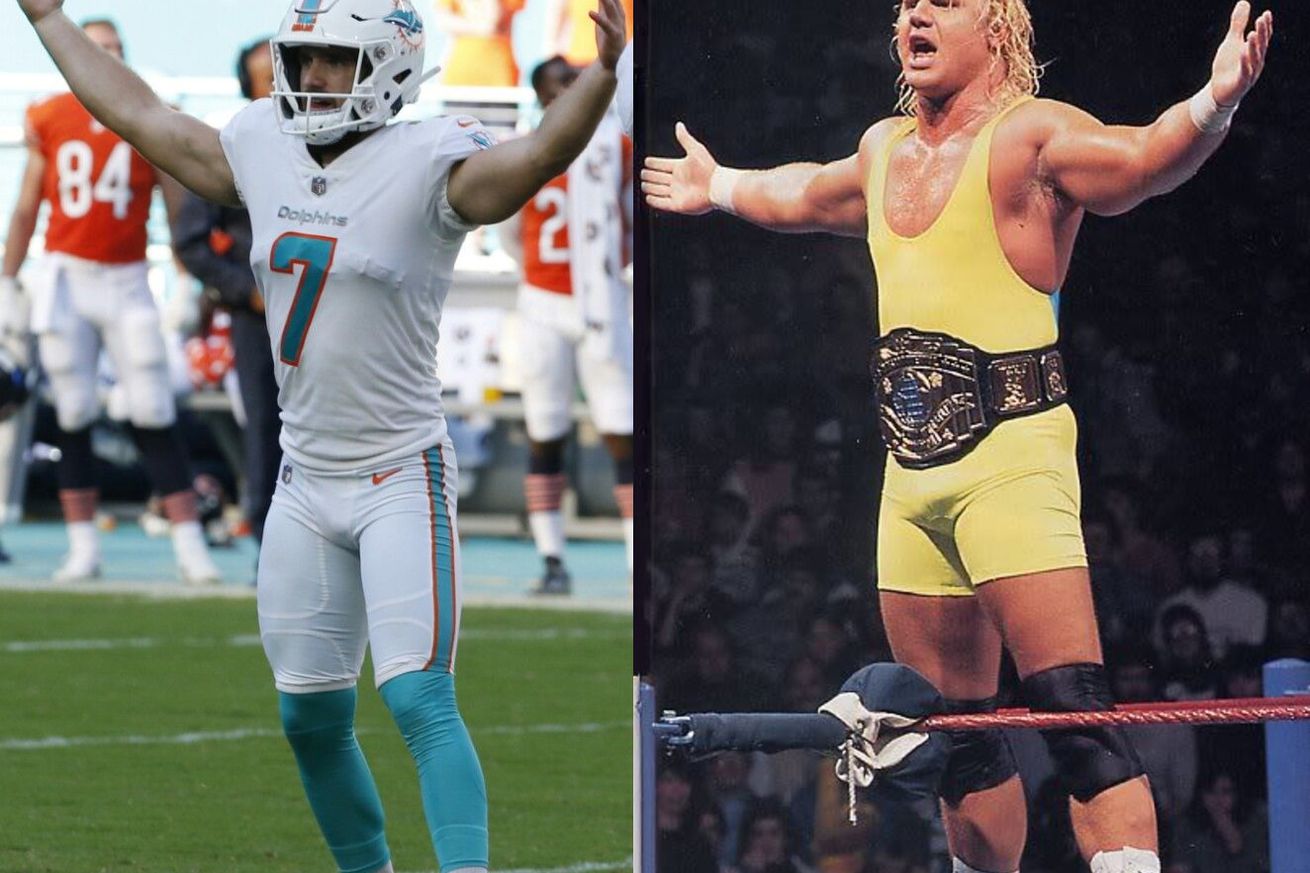 Perhaps, you’ve already seen or read some other outlets talk about Jason Sanders. To that I say shame on you for consuming any other sports’ media besides The Phinsider. I haven’t spoken about the greatness that is Mr. Perfect, Jason Sanders and now I am.

Jason Sanders has been one of the guys that is the reason the Miami Dolphins are 5-3 and on the cusp of being a playoff team and more. Here’s what he’s done this year;

Sanders is 17/17 in FGs and is 21/21 in XPs. When you put up a stat line like that for the first half off the season there’s only one name that needs apply; Mr. Perfect.

The late great Curt Hennig was the original Mr. Perfect. This blog isn’t about to say that Jason Sanders has supplanted Hennig. Quite the opposite because there is no man that can accomplish feats like Curt Hennig once did. Instead an homage to one of the greatest ring technicians that has ever lived.

Would it be nice if Jason Sanders would complete Tecmo style 100 yard passes where he throws it to himself? Of course it would be valuable. But we’ll settle for made FGs every single time he enters the game.

Sanders was named AFC Player of the Month for October but that wasn’t good enough. He didn’t rest on his laurels. Sanders knows he has to keep it up. That’s exactly what he did this past week against the Cardinals.

With seconds left in the first half, the Dolphins decided to strike while the iron foot of Sanders was hot, a sequence that hasn’t been talked about enough, and try and get more points heading into halftime. They got Sanders in a range that Sanders has never tried before in a game. It was a 56 yarder and it was Perfect.

Then late in the game, the Dolphins were tied at 31 and were at the 33 yard line with a 4th and inches. Instead of using Zach Crockett Jordan Howard to try and pick up the first down, Miami decided to bring out the coolest man in the building. I, actually, was against this decision. Howard broke off a long run in Howard terms of eight whole yards and a miss would set the Cardinals up nicely to take the lead. Never again(possible lie right there) will I doubt the idea of sending Sanders out to do his thing.

Sanders drilled that FG and it was difference in the score. Incredible stuff.

Going forward, it’s good to know that we have a guy that we don’t have to worry about from 39 yards like we’ve regularly have for years. Now, the Dolphins have a guy with ice in his veins, which could be a serious medical condition that Sanders might want to look in to. The offense seems like it can score on any drive and it’s nice knowing that all they have to do is get to around the 35 and three points could be penciled in. Actually, it’s more than nice. It’s absolutely Perfect.

By the Way- You like the very newspapery way I ended this blog? I know you do. I felt like I just wrapped up my parting shot on Sports Reporters when I typed it.