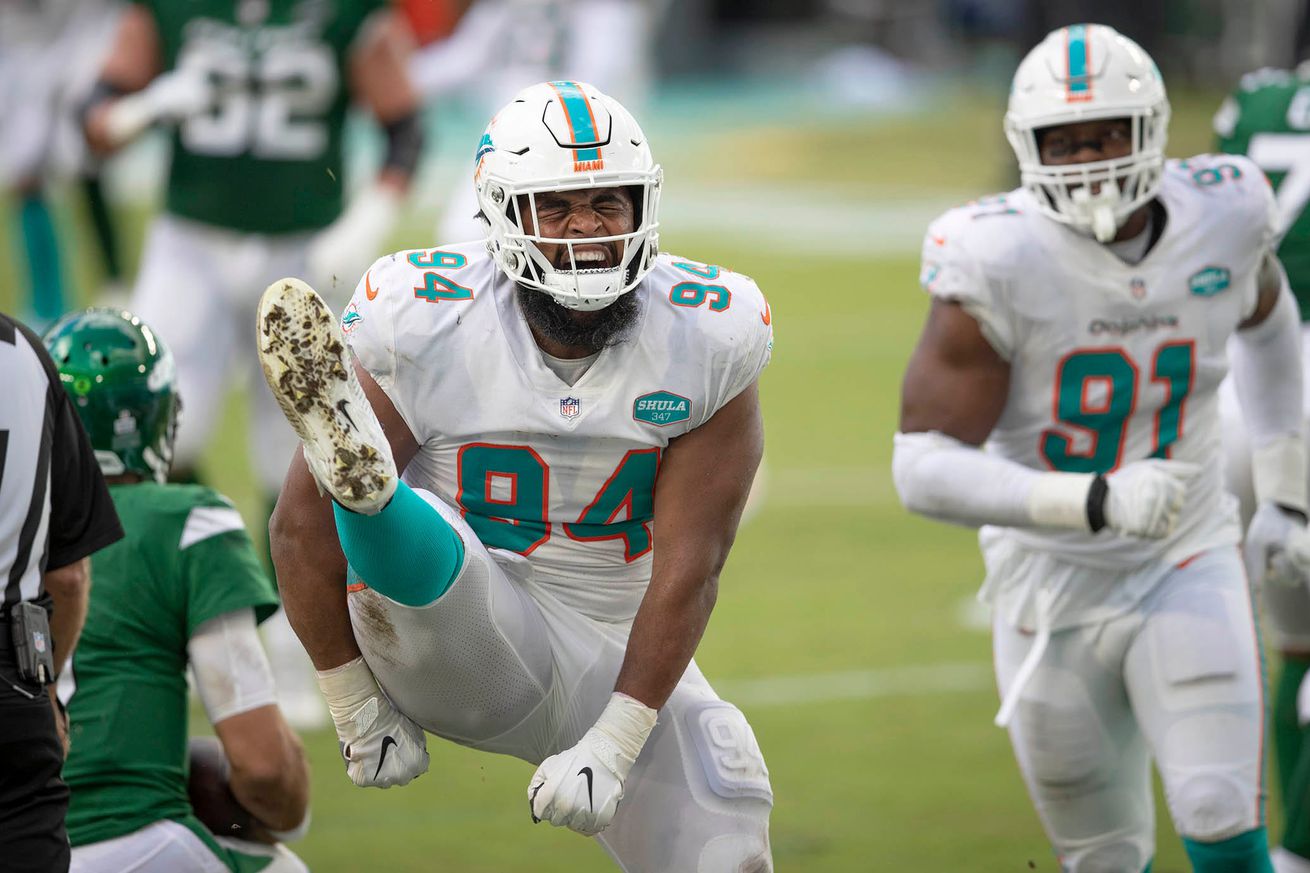 The Miami Dolphins backed up their 43-17 win over the San Francisco 49ers by beating the New York Jets in Week 6. It was not always a pretty performance for the Dolphins, especially in the second half, but the win moves Miami back to 3-3 on the year and into second place in the AFC East.

Plus, the game featured the first appearance of Tua Tagovailoa as Miami pulled Fitzpatrick near the end of the game with the result in hand.

The Jets started the game with the ball, but did not get anything going on their first possession, punting the ball to complete a three-and-out after gaining just three yards.

The Jets second drive was better – they picked up five yards before a three-and-out punt.

The Dolphins were finally able to start moving the ball on their next possession, with quarterback Ryan Fitzpatrick throwing for 24 yards on the drive. Running back Myles Gaskin, wide receiver Jakeem Grant, and tight end Adam Shaeheen all caught passes on the drive, while Gaskin picked up 37 yards on the ground. Running back Matt Breida added five yards of his own, with Shaheen ending the drive with his reception and walk into the endzone. Dolphins 7-0.

New York found their own rhythm on the next drive, starting with Joe Flacco passes to Jamison Crowder, Ryan Griffin, Braxton Berrios, and Breshad Perriman on the first four plays gaining 30 yards. WIth Flacco continuing to find receivers and La’Mical Perine gaining some yards on the ground, the Jets were able to reach the Dolphins 24 and threaten to score. However, a penalty on Griffin for offensive pass interference and a bad snap leading to a two-yard loss, the Jets found themselves backed into a 3rd-and-12, punting from the Dolphins’ 34-yard line

Starting at their own 35-yard line after the punt, the Dolphins quickly picked up where they left off, starting with a Fitzpatrick pass to Breida for 10 yards. He was also able to find DeVante Parker for 10 yards before a run from Gaskin for nine yards (plus a 15-yard facemask penalty). Fitzpatrick then threw to Gaskin for 16 yards, followed by a one-yard run from Gaskin. Fitzpatrick ended the drive with a three-yard pass to Pretson WIlliams for the touchdown. Dolphins 14-0.

The Jets responded with a three-and-out featuring a sack from Miami defensive tackle Christian Wilkins on third down.

Miami started the drive with an incomplete pass before back-to-back sacks from Tarell Basham and Bryce Huff backed up Miami and forced the three-and-out punt.

Flacco threw an incomplete pass to start New York’s next possession, before he looked deep, only to have Xavien Howard undercut the pass and cme away with an interception. It marked the end of New York’s drive and the fourth-straigh game in which Howard picked off a pass.

Miami would not do anything with the ball on the possession, going three-and-out. Miami was called for three penalties on the drive, including a false start on guard Solomon Kindley on second down, a delay of game before the punt, and an illegal formation penalty on the punt.

Starting at their own 15-yard line, Perine picked up three yards on a left tackle run, then added another yard on a reception. After an incomplete pass toward Crowder, a pass that was almost intercepted by Howard, the Jets punted on their fourth three-and-out of the first half.

Miami ran three plays on their next drive as well, except it was a one-yard run from Gaskin, a 43-yard catch and run by Shaheen, and a four-yard touchdown catch by Durham Smythe. Three-plays, 48-yards, 0:41 on the clock. Pretty effecient. Dolphins 21-0.

Another three-and-out followed for New York.

Miami got the ball back with 1:05 to play in the half, looking to score at the end of the half, knowing they also get the ball to start the second half. Gasking picked up seven yards on a first-down reception, then Fitzpatrck picked up four yards on a scramble, with an unnecessary roughess penalty adding 15 more yards. Fitzpatrick then threw to Grant over the middle, with the speedster running for a 30-yard gain. From the New York 16, Fitzpatrick tried to force a pass over the middle, but it was intercepted by Brian Poole.

New York did not come out looking to just end the half, however, as Flacco threw to running back Frank Gore for nine yards, before a timeout was called. Two straight incomplete passes, however, set up 4th-and-1. Perine ran for 13 yards on the play as the clock ran out.

It started slowly, but this game is all Dolphins at this point. Is it possible the Jets could fire Gase at halftime?

Miami has almost as many touchdowns in the first half as the Jets have three-and-out possessions.

The Dolphins were not perfect in the first half with dropped passes, penalties, and just some sloppy football, but they are taking it to the Jets and not playing down to their opponent. Now they have to come out in the second half and keep up the pressure.

The Jets, meanwhile, look flat and lifeless. They are just going through the motions at this point.

Not exactly the start to the half Miami envisioned. Two runs from Gaskin picked up seven yards, then Fitzpatrick’s pass was batted down at the line of scrimmage as he looked toward Parker. Miami started the second 30 minutes with a three-and-out.

The Jets did not start any better, losing two yards on a Gore run, then Flacco was sacked by Emmanuel Ogbah for a two yard loss. On 3rd-and-14, the pressure forced Flacco to throw it away and New York settled for their sixth three-and-out.

Gaskin picked up seven yards to start Miami’s second drive of the half, then added two yards on the next play. After a one-yard loss, the Dolphins punted again, another three-and-out for the team.

New York started their drive witha good gain from Gore, moving the ball 12 yards down the field. Gore added another yards on the next play before the drive stalled and the Jets were forced to punt after four plays.

Miami started with the ball at their own 40-yard line, immediately moving into Jets territory with a 15-yard gain on a Fitzpatrick pass to Williams. Fitzpatrick looked deep on the next play, finding Parker for 18 yards, then Shaheen for four yards, followed by Parker for seven yards. Gasking picked up four yards, then five yards, before a 3rd-and-1 pass from Fitzpatrick fell to the ground, leading to Miami to turn to Jason Sanders, who connected from 24-yards to increase Miami’s lead. Dolphins 24-0.

The Jets were able to move the ball more effectively on their next possession, starting at their own 25 and quickly moving to Miami’s 24-yard line. Highlighted by a 34-yard run from Ty Johnson, an inentional grounding penalty on Flacco, who tried to throw away the ball as defensive end Shaq Lawson tackled him, killed the drive and the Jets lined up fr a field goal. The ball pushed left and New York picked up nothing on the possession.

Miami again settled for a three-and-out on their possession, continuing the streak of no third-down conversions in the game.

New York saw a 14-yard run from Gore start their drive, but then an incomplete pass, an eight yard gain by Gore, and a two-yard loss from Gore led to another punt.

Miami’s possession consisted of a deep pass attemt by Fitzpatrick toward Williams, only to have the ball bounce off Williams, land on Marcus Maye’s butt, sit there, then roll to his back and somehow around to his hands for an interception.

The Jets started with the ball at their own 24 after the pick, starting with a no-gain run from Johnson. Flacco then threw for 13 yards to Crowder, then for six yards to Gore, followed by an incomplete pass. On 3rd-and-4, the Jets converted a third-down play for the first time by either team on the day, with Flacco throwing to Perriman for 22 yards. After an incomplete pass and a six-yard throw to Gore, Flacco was chased in the backfield by safety Eric Rowe, then sacked for a 28-yard loss by Ogbah, his second sack of the game. New York punted.

Miami went three-and-out on their possession.

The Jets had their best possession of the game on the next drive, starting with Gore picking up three yards on a pass from Flacco. After an incomplete pass, Flacco threw to Crowder for 12 yards and a second third-down conversion. Flacco found Perriman for 21 yards two plays later, then after an incompelte pass, he threw to Griffin for 8 yards. Facing a 4th-and-2 two plays later, Flacco connected with Perine for seven yards. The drive ended after three incomplete passes in the back of the endzone, with Miami taking over on downs.

The Dolphins then inserted Tua Tagovailoa at quarterback for the first time in the rookie’s career. Tagovailoa handed off to Breida on the first play who picked up one yard as the clock ran to the 2-minute warning. Tagovailoa then threw his first two passes in the league, finding Patrick Laird for two yards, then Grant for seven yards. The game ended on two Breida runs to kill the clock.

Second Half and Final Immediate Reactions

The Dolphins now head into the bye week 3-3 on the season and looking like they can compete in the AFC. They may or may not remain in the playoff hunt all year, but this is not a team that should be considered a contender in every game.

The no-third-down-conversions is worrisome. Hopefully that is just an oddity for this game, but Miami has to be able to do better on third downs.