The Dolphins have been one of the most aggressive teams this offseason with respect to offensive additions. Their receiving corps has been augmented both via trade and free agency, leaving one of their incumbent wideouts unhappy with his projected role. 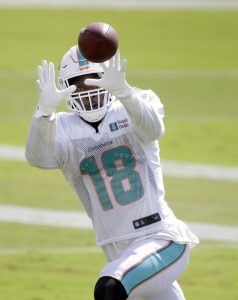 Preston Williams took to Twitter last night to state that he “just want[s] [an] opportunity” (link). His largest workload came in his rookie season, when he started seven of the eight games he played in. He turned 32 catches into 428 yards and three touchdowns that year. His appearance and start totals remained the same in 2020, but his playing time, targets and receptions all dropped off significantly.

This past season, Williams saw the field for a career-low 32% of the Dolphins’ offensive snaps. The limited role, along with an historic rookie campaign by Jaylen Waddle, led to the six-foot-five, 220-pounder recording just six catches. It came as little surprise when the Dolphins declined to tender the former UDFA, but they still brought him back on a one-year deal this offseason.

This season, the Colorado State alum faces a long list of competitors for targets in Miami’s offense. Waddle will be joined as a starter by Tyreek Hill and Cedrick Wilson at the position. Franchise-tagged tight end Mike Gesicki has also established himself as a dependable option in the passing game, so Williams is likely in store for a repeat of 2021 in terms of usage. His age (25), size and efficiency (14.1 yards per catch average) could, on the other hand, make him an intriguing target for outside teams either via trade this year of free agency next spring.