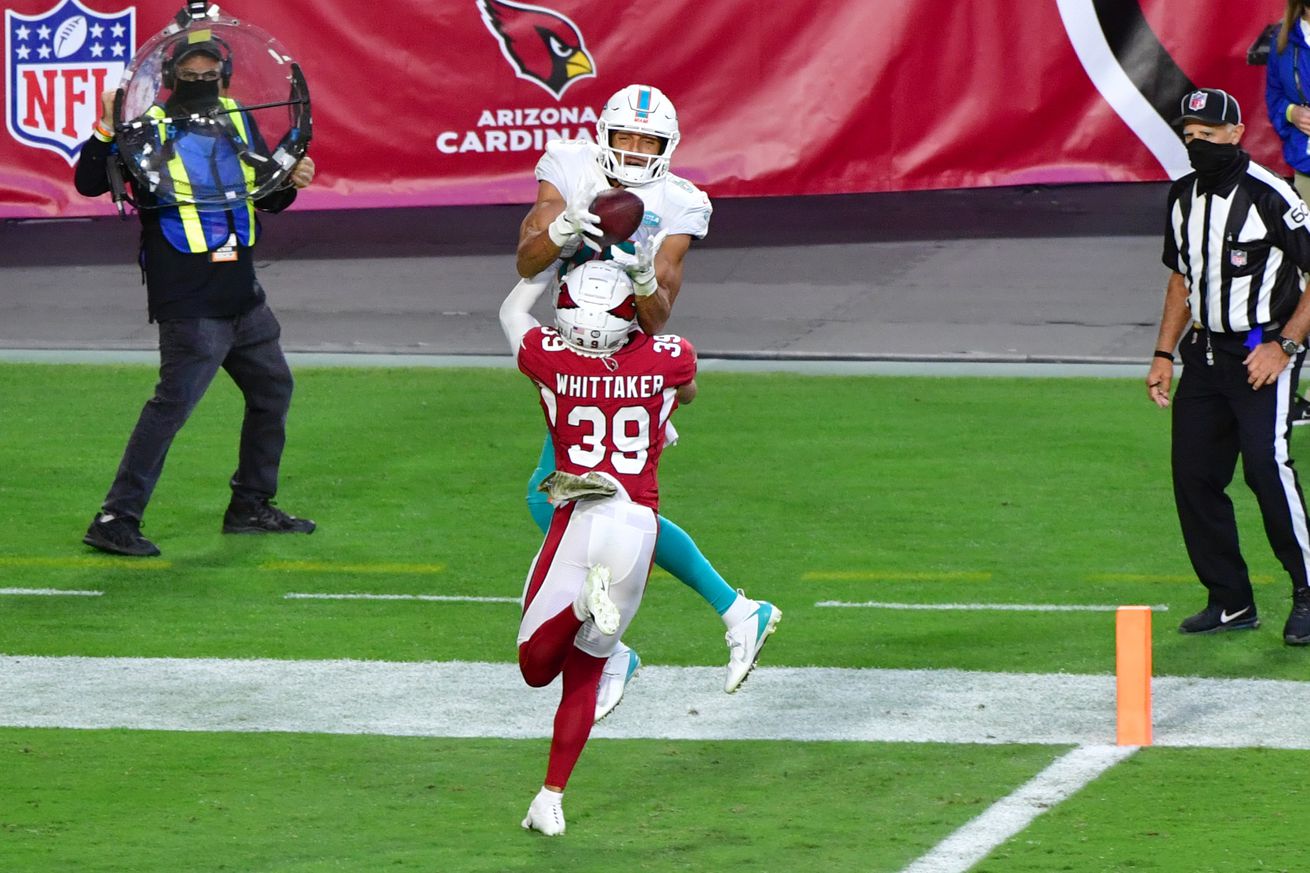 The playoffs are starting to look like a real possibility in South Florida.

The Miami Dolphins made the switch to start rookie quarterback Tua Tagovailoa on their bye week. Most assumed, and rightfully so, that the road would be bumpy with glimmers of superstardom mixed into the fold.

A strong finish to the 2019 season provided hope that the team was just a few years away from perfecting the puzzle and becoming a playoff team, but that timeline has quickly shrunk.

Not only have they matched their win total of last season in half the games, but Sunday’s performance showcased why Tagovailoa is looking like the solution to so many questions that have haunted the organization over the last 20 seasons.

The Dolphins not only upset the Cardinals, but improved to 3-1 on the road and went 3-1 against the NFC West — a division many would call the best in football.

It is important to keep in mind that Tagovailoa wasn’t the only reason the Dolphins won on Sunday, but the rookie, in only his second career start, went above and beyond expectations to secure the win.

The first half of Sunday’s game gave the full range of what to expect from a rookie quarterback. He was sacked twice and the Dolphins shuffled the offensive line as Jesse Davis moved to right guard and rookie Austin Jackson stepped in at left tackle.

It could be argued that Tagovailoa played it too safe at times, taking sacks when he could’ve thrown the ball away. He also received an intentional grounding penalty after throwing a pass to Robert Hunt’s foot and was nearly intercepted when attempting to throw the ball out of bounds.

Rookies, especially in their second-career start, are destined to make errors. However, the last few days haven’t been about the hiccups that plague young quarterbacks, because for every miscue, there was a play that left jaws on the floor.

The 34 points scored is the second-most by the Miami Dolphins this season and the offense found the end zone twice in the first half. Tagovailoa’s favorite target, especially early, was Preston Williams. The second-year receiver finished the game with four receptions on five targets for 60 yards before exiting with an injury that is being labeled “day-to-day.”

Tagovailoa connected with Williams to take a 21-14 lead early in the second quarter. While Williams had a nifty hurdle to make the reception worth six points, this play seemed like a simple pitch-and-catch.

It is important to point out that Tagovailoa made the correct read, but had plenty of help from Mike Gesicki. Miami’s big tight end drew three defenders in the back of the end zone, opening space underneath for Williams.

As mentioned earlier, there was a handful of plays were Tagovailoa seemed reserved, but that thought process evaporated as the game developed. Tagovailoa never seemed to panic and looked comfortable letting plays develop. This completion to tight end Durham Smythe was executed to perfection by Miami’s offense.

Tagovailoa looked defenders off to the right and to the left, before Smythe snagged the reception and landed the offense on the outskirts of the end zone.

There were times Tua could’ve thrown the ball away and didn’t. I was getting concerned that he may try to play it too “safe” at times, but that wasn’t the case. He lets the play develop and it worked like a charm. pic.twitter.com/muwMYP2rJ3

It is pretty common that young players get caught trying to do too much, which looked like the case to start the fourth quarter with the Dolphins trailing by seven. Miami was inside Arizona’s 30 looking to tie the score.

A six-man rush swarmed Miami’s offensive line and Tagovailoa was forced to scramble. This is common ground for the Dolphins, a team that struggled to develop an offensive line.

Tagovailoa ran into a Cardinals defender and the worst was to be expected with a quarterback making his second-career start (I don’t think we can highlight this enough).

A sack would’ve created a challenging third down attempt for the offense, but that situation was avoided as Tagovailoa emulated what the Cardinals offense has in Kyler Murray.

Not only did he spin past the defender, he blew by two more at the line of scrimmage and scrambled down to the 11-yard line. The drive would then end with a Mack Hollins touchdown that had a 16.4 % success rate according to Next Gen Stats — the most improbable completion by a Miami quarterback in the last three seasons.

Tagovailoa’s 248 yards and two touchdowns through the air, along with 35 yards on the ground gave the Dolphins everything they needed to escape Arizona with a victory.

The Dolphins have flirted with the playoffs time and time again — just coming up short.

Late in the third quarter, trailing by seven, Miami’s offense was backed inside of its own 10 and facing a 3rd and 9. A punt would surely put the Cardinals into excellent field position with an opportunity to increase its lead — the Dolphins were desperate for a play.

This was, in my opinion. Tagovailoa’s most critical play of the game. Five defenders swarmed the line of scrimmage and was in Tagovailoa’s face.

With both feet in the end zone and pressure coming, this play highlighted the difference between “the same ol’ Dolphins” and a team looking to turn the page on 20 years of mediocracy.

The runs were awesome and Tua had a handful of great plays, but 3rd and 9 inside your own 10… with a defender in your face!? You kidding me!?

This is why you start Tua with a record of 3-3… meaningful situations in meaningful football games pic.twitter.com/ndyuX8XLgD

Tagovailoa doesn’t get sacked and he doesn’t panic. Instead he places a ball on the left shoulder of DeVante Parker, who boxes out his defender and keeps the drive alive with a strong gain.

In fact, that throw is what ignited Miami’s 93-yard drive to knot the game at 31. Instead of a few highlights and moral victories, the Dolphins are positioning themselves to not only develop one of the youngest rosters in football, but make a run for the playoffs this season.

Suddenly, Miaim’s multi-year plan is taking shortcuts and Tagovailoa is a large reason why.

More coverage of Miami’s winning streak can be found on Phinsider Radio, hosted by myself and Josh Houtz.