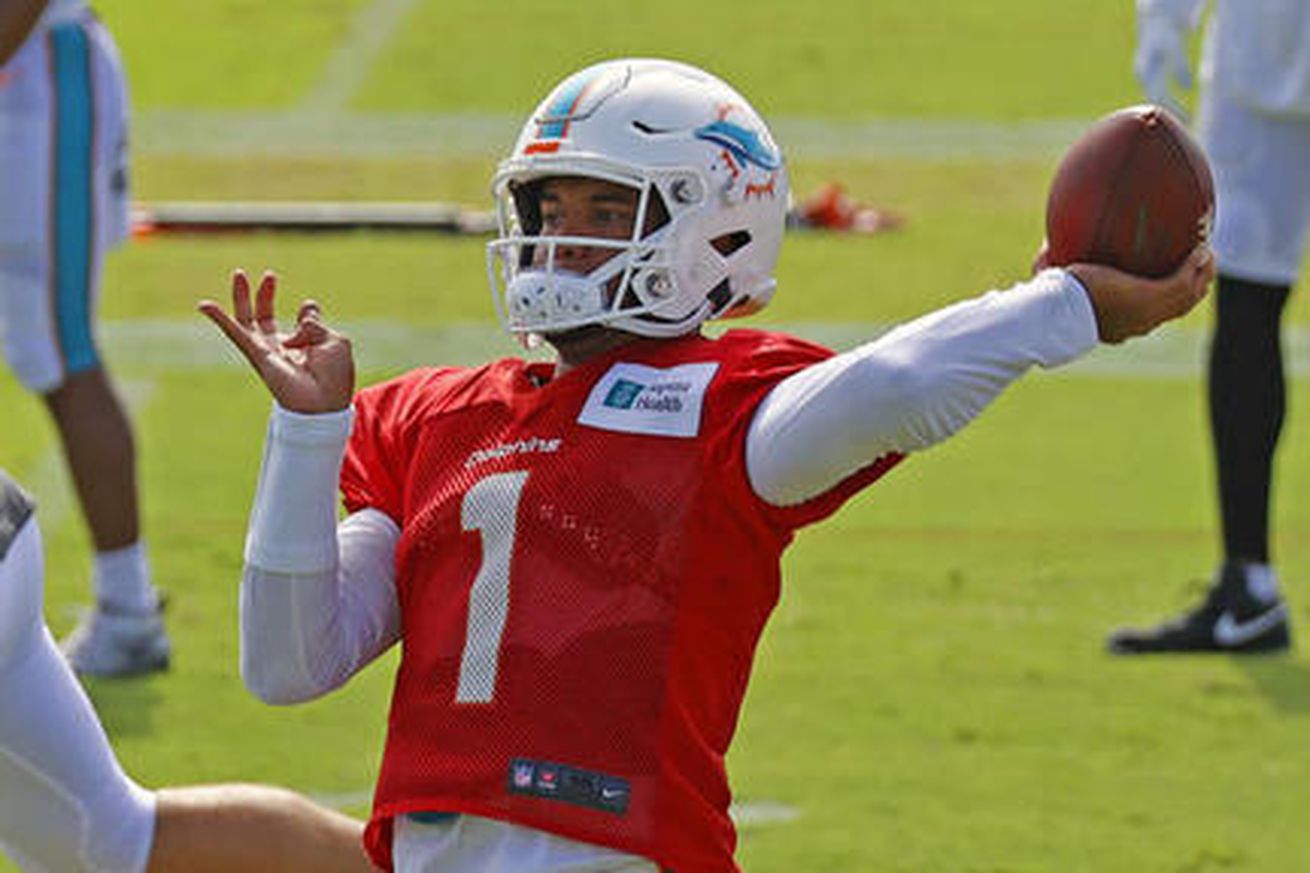 We’re one day closer to the start of the Miami Dolphins campaign to turn around a franchise that’s been, mostly, a dumpster fire if the dumpster was made out of rotting garbage for the last 20+ years. All signs are pointing to the Dolphins trending upwards making right now the best time to be a Dolphin’s fan in decades. I realize that this regime still has to prove it, but you can’t, realistically, look at how this team has operated in the last 20 months and think that they’re clueless unless you’re suffering from “typical Dolphin’s” fatigue where you’ll never be convinced that they’re good until they hoist a Lombardi.

One of the, if not, biggest reasons why the Dolphins are ascending is because of rookie quarterback Tua Tagovailoa. This dude is, undeniably, electric, and has a chance to carry the torch of biggest icon in Miami from Dwyane Wade who got it from Dan Marino. That’s how polarizing Tua is.

We’ll have to wait for Tua to grace us with his aura on an actual football field because Ryan Fitzpatrick was named the starter on Sunday evening. It’s the right move. Fitz knows the, newly installed, Chan Gailey offense, played pretty well last year, is entering his 16th season in the league, and is completely beloved by everyone in locker room. That all being sad, I think the most likely scenario is that we see Tua on the field sooner than most are saying.

For instance, Colin Cowherd has Tua starting November 8th. Start it at the 4:02 mark.

We know the book on Ryan Fitzpatrick. We know for all the gritty runs and good games he can string together that lurking in the closet is a four INT game followed by another four INT game. He’s the ultimate ying/yang player. When he’s on, he’s awesome. When he doesn’t have it, it’s sad. It means, it’s not out of the realm of possibility that he starts the year cold.

Also, since Fitzpatrick has no fear of using his legs to advance the ball downfield, it puts him at more risk of getting injured. He could knock his finger off a helmet due to one of his young offensive linemen getting thrown back into him. Tons of things can happen out there. I know I know, that’s big time journalism right there.

My biggest reason for believing that we’ll see Tua soon is because how often do early 1st round quarterbacks typically sit? The answer is not very long. Looking back at the last 10 seasons, I found only two guys who were picked in the first 25 picks in the first round that sat for majority of their rookie year. Jake Locker in 2011 and some guy named Mahomes in 2017.

I think it goes without saying that the Dolphin’s organization is very confident with the idea of Tua getting in a game. If they felt any amount of trepidation about Tua’s hip or grasp of the offense they wouldn’t have gotten rid of Josh Rosen. Getting rid of Rosen, essentially, said that Miami is fine with Tua being one play away from running the show. Or, Tua is six quarters of terrible play by Fitzpatrick from Flores saying lets go with the rookie, maybe he can salvage this.

Using my Ouija board to search for life’s unanswerable questions, I have found that Tua Tagovailoa will be in an actual NFL game on October 4th at home against the Seahawks. When this doesn’t happen, don’t dare blame me. If you’re smart, you won’t blame the Ouija board either. That’s something I would advise against.

Enjoy your Wednesday and let the fact that NFL football is only a day away get your through the work day.