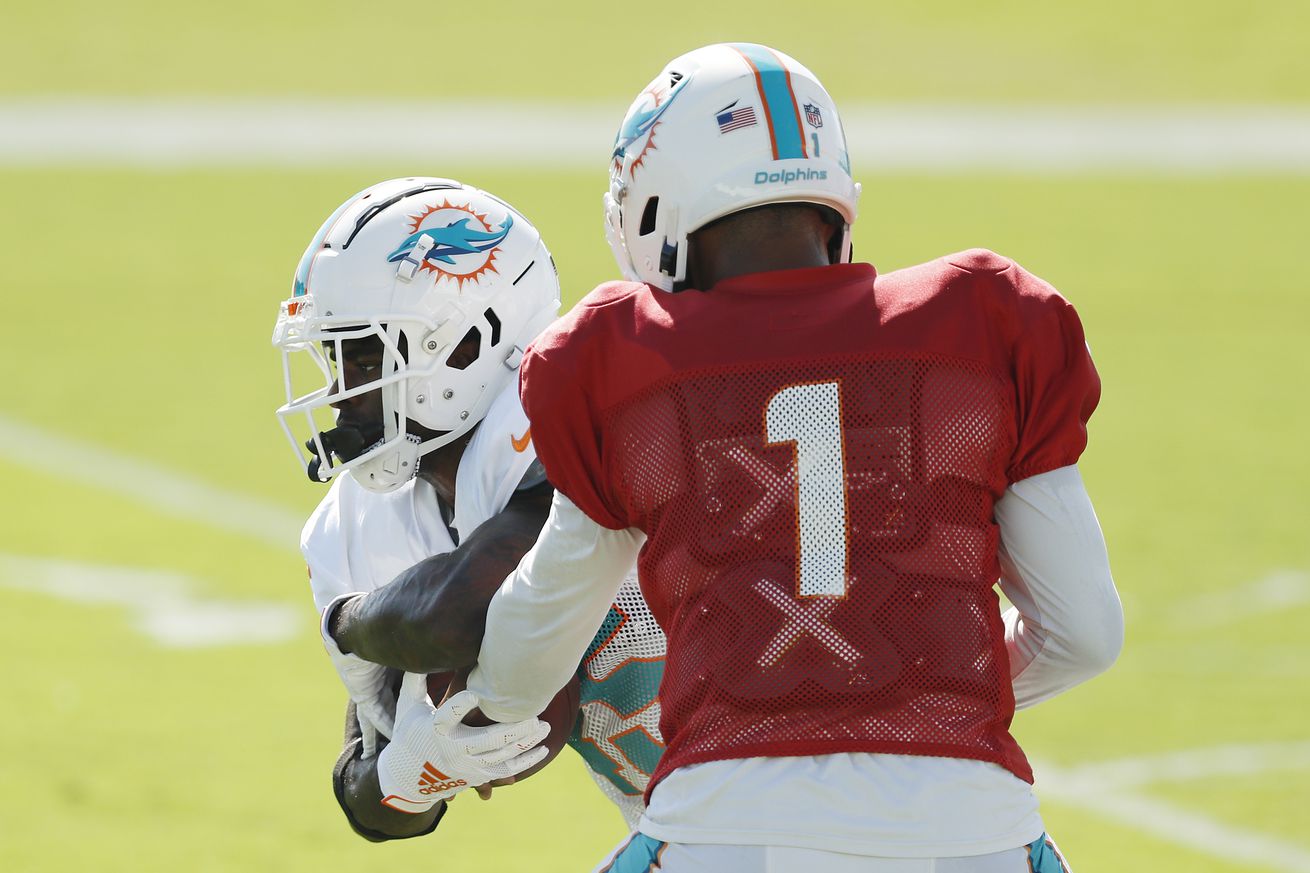 We have moved another week into the Miami Dolphins’ 2020 training camp, with the team completing their scrimmage over the weekend. We now are reaching the point in the summer where the media can only cover the opening of each practice, which means we will be getting even less information than we have been receiving in this weird COVIDland summer.

The Dolphins’ opening game is less than two weeks away, with the roster limit of 53 players going into effect on Saturday. Who will be making the active roster for the Dolphins? We take a look today, updating from our prediction last week.

No change to the quarterbacks. Unless a team overwhelms in a trade offer for Rosen, the Dolphins likely keep all three players this year as Tagovailoa (and Rosen) continue to develop for 2021.

Technically, Kalen Ballage is back on the Dolphins’ roster after the trade to the New York Jets was negated by a failed physically, but he likely will be released soon. Salvon Ahmed was added to the roster via waivers a few days ago, so there is no real way to assess his likelihood of making the roster. When asked about the running backs on Monday, head coach Brian Flores stated, “I feel good about really all five guys. Salvon (Ahmed), we just got him. I’m looking forward to seeing him and what he can do today, with this really being his first time out there. I think (Patrick) Laird and (Myles) Gaskin and Breida and Jordan, all four guys are capable. All are competitive guys. All have some role in the kicking game and they’re different styles of back, each one of them. I think I’m comfortable with any of the five guys – or four guys, I haven’t seen Salvon up close yet. Yeah, I’m comfortable with all of the guys. That’s a hardworking group and a competitive group. Those are the things that I’m looking for. They run hard, they’re fast, they’ll block, catch the ball out of the backfield. I’m looking forward to seeing what they can do in 13 days.”

I really would like to see Cox make the roster, as I like the idea of the Dolphins having a power lead blocker to clear the hole in the running game – I just have not heard enough about him this summer to feel like he is a lock for the roster. I want to open up a roster spot, so Cox falls off now.

No change here. I like the idea of Myarick making the roster, but I think he is probably a practice squad player at the start of the season.

No change. I feel like Gesicki is going to spend more time split out more like a wide receiver this year, so he will essentially be the sixth player in this group, which makes me feel like five receivers are okay here. I think Rogers has the best shot to make the roster out of the bubble group. I see Ricardo Louis as a practice squad player. Andy Jones was signed on Monday, so he will factor into this somehow, once the coaches get to see him a little more.

I need to create some roster space, because I think the Dolphins have to bolster the defense from my last version of the prediction, so Isidora moves to the bubble watch. I am not sure on the top five being the starting five whenever we get to the start of the season, so it will be interesting to see how the Dolphins piece together the line.

Avery Moss added to the defensive end group, making me feel a little better about the position depth.

Harris gets added to the roster after Miami re-signed him last week. I created the prediction prior to him being an option, but he definitely seems like a player who should be on the roster to give Miami depth on the edge. I think the Dolphins are not done trying to address pass rush. Update: The original publication still had Raekwon McMillan listed on the depth chart despite him being traded to the Raiders.

No change here. Howard coming off the physically unable to perform list makes this position feel a little better. Update: The original version of this prediction was published with Webster on the bubble. He moves to the roster with the roster spot opened up once McMillan was removed.