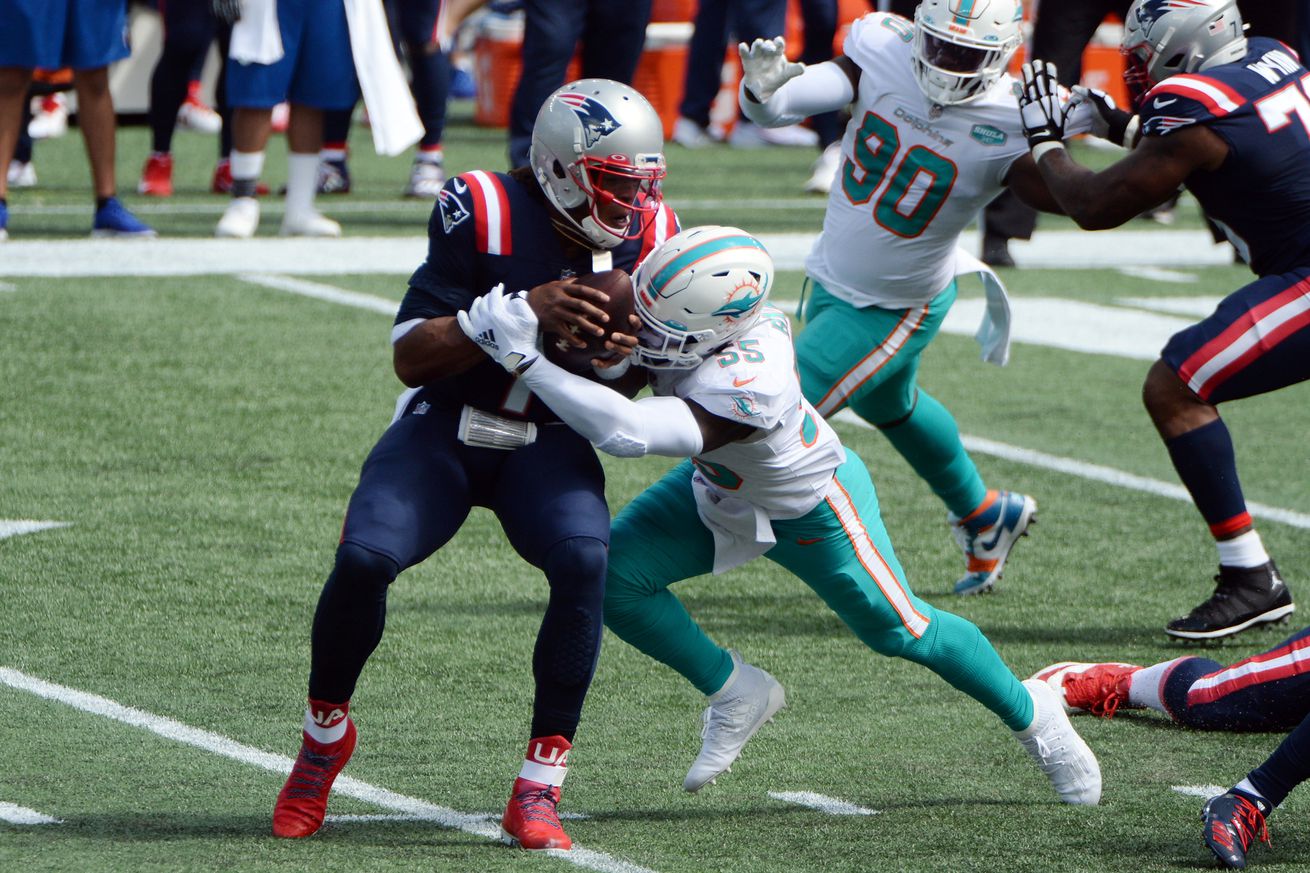 This morning, we took a look back at the Miami Dolphins’ 21-11 loss to the New England Patriots on Sunday by examining the offensive snap counts for the Dolphins. Now it is time to take a closer look at the defense. There really were not any major surprises, with maybe some extra rotation of players in the first game of a season which included no preseason games.

No one played all 64 of the Dolphins’ defensive snaps, though there were a few who came close. One of those, surprisingly, was Shaq Lawson, who played 94 percent of the game, 60 snaps, at defensive end. Usually the defensive line is a constant rotation, unless a player like Ndamukong Suh simply never comes out of the game, so to see a defensive end so high up the snap counts chart in Week 1 is impressive. Along with Lawson, Emmanuel Ogbah played 55 snaps (86 percent) and Christian Wilkins took 43 snaps (67 percent) for the defensive ends. Wilkins was a beast in the game, finishing with six tackles, one sack, two tackles for a loss, and two passes defensed.

Continuing on the defensive line, Davon Godchaux led the defensive tackles with 44 snaps played (69 percent), while Raekwon Davis appeared on 27 plays (42 percent), and Zach Sieler was in for four plays (six percent). Miami began the game in a 3-4 base defense, but as Cam Newton and the Patriots running backs continued to gauge them on the ground, the line transitioned to four- and five-player fronts, trying to force New England to change their play calling.

At linebacker, Jerome Baker was the most active player on the field (except maybe Wilkins), and his snap count reflected that. Baker appeared in 61 of Miami’s 64 defensive plays (95 percent), and he led the team with 16 tackles, along with a sack, and a forced fumble. He played sideline to sideline, and he attacked the ball – though he did get lost in coverage a couple of times. Baker leading the linebackers in snaps should not come as a surprise, but the drop to Kyle Van Noy with just 41 snaps (64 percent) could be seen as a surprise. Maybe it has to do with the hand injury that had him limited in practices last week, but whatever the case, Van Noy seeing less than two of every three snaps was unexpected. Elandon Roberts was third in the position group in terms of snaps, appearing in 40 plays (62 percent). Kamu Grugier-Hill (18 snaps, 28 percent) and Andrew Van Ginkel (8 snaps, 12 percent) rounded out the group.

Byron Jones led the cornerbacks, and the team, with 62 snaps played (97 percent). Noah Igbinoghene played the second most for the group, appearing in 37 plays (58 percent), followed by Jamal Perry (31 snaps, 48 percent). Starter Xavien Howard only played 27 snaps (42 percent) as the team continues to work him back following a knee injury last year.

At safety, Bobby McCain led the way with 58 snaps played (91 percent). He made some plays and looked more comfortable at safety as the team continues to develop him on the back-end of the defense. Eric Rowe was in the game for 54 snaps (84 percent), while Brandon Jones played 34 snaps (53 percent). Jones got the start over Rowe on the day.

The biggest issue for the Dolphins on Sunday was the Patriots’ rushing attack. Honestly, it just looked like they missed Raekwon McMillan. They had no answer for any of it. The danger of Miami’s defense is how much it is made to cover, including the safeties who really are free safeties, not in the box thumping safeties able to support the run defense. Miami needs to make some adjustments this week to solve this issue, or it will be a really long year that feels too similar to last year.