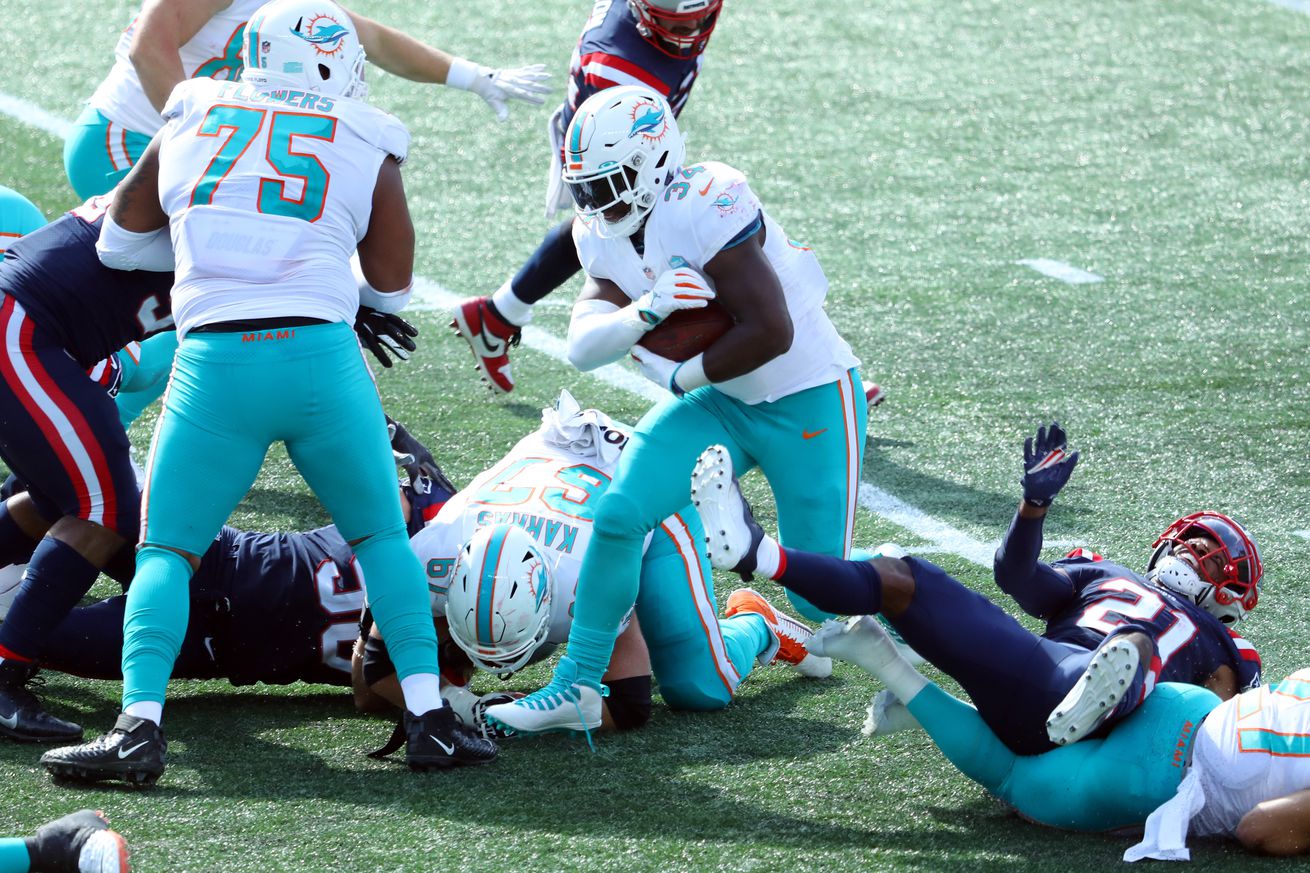 The Miami Dolphins lost to the New England Patriots on Sunday, dropping to 0-1 on the year with the 21-11 final score. It was a rough game, with the Dolphins offense failing to find a rhythm and the defense struggling against the Cam Newton led Patriots’ ground attack. This morning, we take a closer look at the Dolphins’ offense through the official snap counts from the game.

Six players took at 62 offensive snaps, quarterback Ryan Fitzpatrick and the starting five offensive linemen, left tackle Austin Jackson, left guard Ereck Flowers, center Ted Karras, right guard Solomon Kindley, and right tackle Jesse Davis. Miami used tackle Robert Hunt on two snaps as a tackle-eligible sixth lineman. The line played well most of the day, especially with pass protection where they only allowed one sack late in the game when Miami was forced to pass every play. They have to create space in the run game better, but four of five starters, and five of the six to play on Sunday, are new to the team, Davis being the only 2019 player to be out there in 2020, so their ability to get onto the same page for the first game they have played together is a positive sign.

At wide receiver, Preston Williams played 90 percent of the game, followed by Isaiah Ford at 74 percent, Jakeem Grant with 53 percent of the snaps, DeVante Parker saw 37 percent of the game, and Mack Hollins played five percent. Williams makes sense, though it is probably a little surprise that, coming off the ACL tear that ended his rookie season, the Dolphins played him as much as they did. Williams only caught two passes on seven targets for 41 yards on the day, despite playing 56 snaps.

Ford worked as the team’s slot receiver, but only caught two passes for 13 yards. Grant, who saw some of the slot duty until an injury sidelined Parker, caught three passes for 25 yards. Parker, who saw the hamstring injury that had him sidelined during most of training camp flare up during the game and land him back on the sideline, caught all four passes that targeted him, gaining a team-high 47 yards. Hollins was not targeted in his three snaps played.

At tight end, Durham Smythe is listed as the starter, but only played 21 percent of the game, while Mike Gesicki played in 73 percent of the plays. That makes sense as Gesicki is the pass-catching threat of the three-man tight end group. He struggled at times on the day, and he appears at times to be looking for the pass interference call more than he is worried about making a play on the ball, but he was mugged in the endzone on the final interception from Fitzpatrick, a penalty that was just completely ignored by the referees. Gesicki caught three passes for 30 yards on the day. Adam Shaheen worked as the third tight end, appearing on the field for 19 percent of the plays.

The running backs may be the most interesting group. Jordan Howard is the starter and it looked early that he was going to be fed the ball all game. There was a report during the game that he had an injury and was questionable to return, but the team clarified that he was not injured, re-entering the game for Miami’s lone touchdown. He carried the ball eight times in just nine snaps played, but he only gained seven yards with the score.

Myles Gaskin was the main runner for Miami on Sunday, picking up 40 yards on nine carries, along with 26 yards on four receptions, playing 39 snaps (63 percent of the game). Matt Breida, meanwhile, was missing early in the game, remaining on the sideline through much of the first half. He ultimately played 14 snaps with five carries for 22 yards. Patrick Laird played four snaps (six percent), recording two receptions for nine yards.

Fullback Chandler Cox played 11 snaps, 18 percent of the plays for the Dolphins on Sunday.