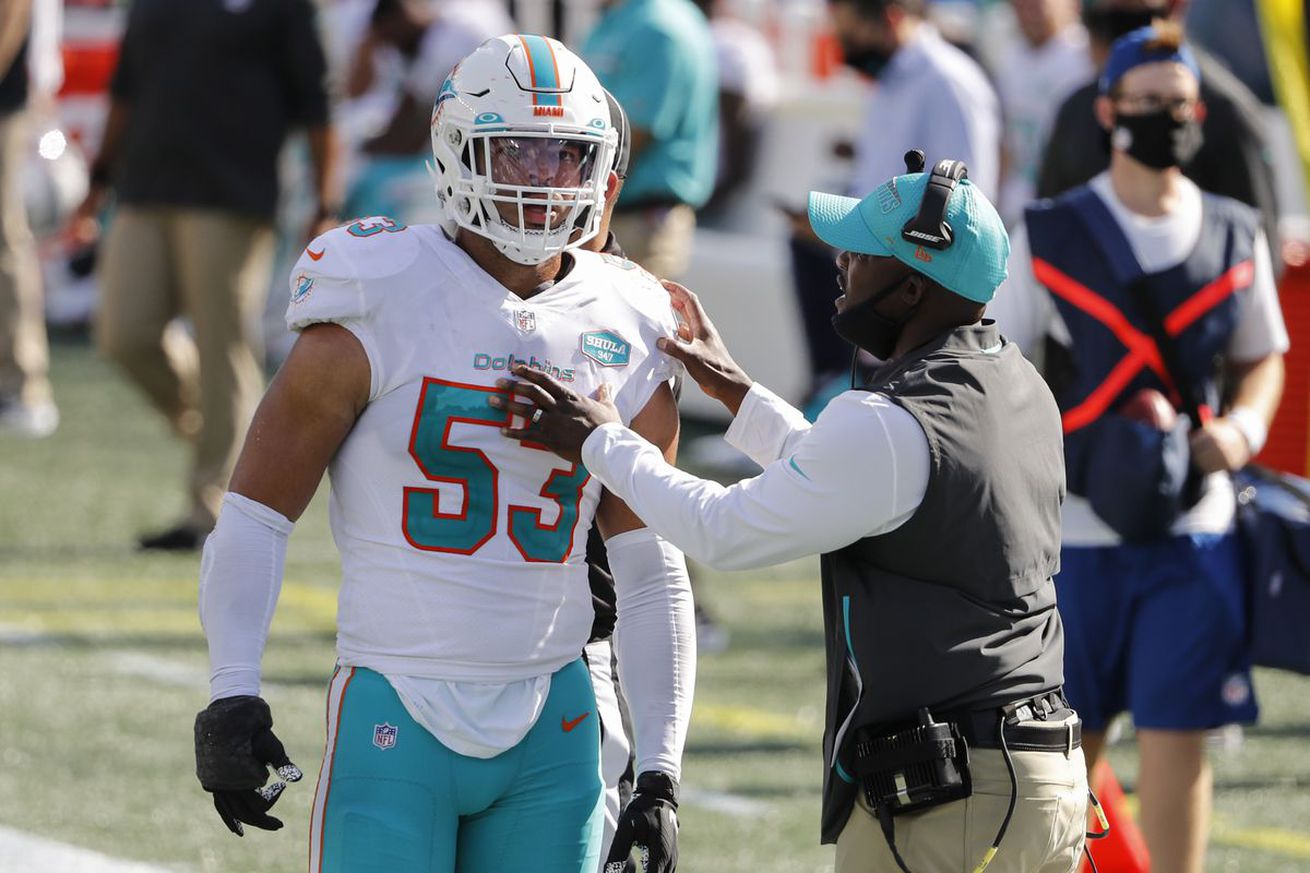 Everyone needs to relax about the current state of the Miami Dolphins. Way too many folks out there freaking the F out and being very unDude. Tons of people saying that Flores is an idiot, that the defense, with all the money invested in it, is garbage for life, and that bringing back Fitzpatrick and hiring Chan Gailey were stupid moves. The thing is, you might be right. All these thoughts might, eventually, be spot-on. But the truth is, there isn’t anyone that can say that this season is already over after a 21-11 loss to the Patriots and not sound like a whiny doofus. If that’s what you’re in to, have at it.

The worst part about the game was that I knew that a Cam Newton led offense would incorporate Josh McDaniels utilizing what Cam does best, and that’s running the ball. Cam ran 15 times for 75 yards. It was a wildly infuriating 75 yards because it was known early on that the Dolphins had no scheme or didn’t have the proper personnel to stop it. Guys weren’t reading their keys, weren’t setting the edge, and seemed befuddled on who’s responsibility it was to have either the quarterback or running back when it was an RPO or an option play. To me, that’s the most damning thing about the whole game. That Brian Flores, without a question of a doubt, was out-coached. The other coach is the hooded one, but still. You must put forth a better strategy than what you did. I’m relatively sure there’s tape of Cam Newton out there that they could have gotten their hands on that shows him playing precisely like he did on Sunday.

The offense looked like it was a preseason game. That’s something that can’t be overlooked. Not trying to make an excuse, though it’s pretty much what I’m doing, with no preseason coupled with the influx of new players, as much as I dreamed of the offense to be humming, I’m not shocked that they never got out of the gate. In my game preview blog, I wrote that they needed to start fast, something they rarely do. They did the opposite, and it wasn’t good.

Fitzpatrick looked like a 37-year-old guy whose arm had a very Chad Pennington quality to it. Maybe that can change within a week. I’m sure I’m lying to myself about that. I also wrote last week, read it here, that Tua was going to be put it into the lineup earlier than most think or want. I said we’re six terrible Fitzpatrick quarters or one Fitzpatrick choking on his gum situation away from the staff putting Tua in a game and keeping him there. I hope it’s not this week against Buffalo because they’re nasty, and I’d rather that not be the first NFL action that he sees. Jacksonville, on the other hand, sure.

I’m sure y’all saw the tweet Houtz posted about the Dolphins snap count from Sunday. If you didn’t, here it is…

here’s a look at the #dolphins snap counts from their 11-21 loss to the patriots on sunday. pic.twitter.com/QXr18nqqGC

Some of the more eye opening items you’ll see on there is that Nik Needham didn’t play a down, Myles Gaskin played the most out of all the backs, and that rookie Brandon Jones played the most on defense. This is just another lesson in don’t listen to anything you hear in training camp from coaches or beat writers. Not saying that beat writers are lying. They aren’t. They’re reporting what’s actually going on in practice. But they truly know as much as we do about what’s going on in the coaches heads and the coaches aren’t, typically, going to let you in on that.

An encouraging aspect of the game is that a few of the Dolphin’s young players and rookies played pretty well. Austin Jackson and Solomon Kindley gave up only one quarterback pressure between them. Overall, Fitzpatrick had a clean pocket and having two rookies a part of that is a wonderful thing. Here’s another terrific Houtz tweet concerning Brandon Jones;

#dolphins safety brandon jones joins xavien howard, fred warner, devin bush, and shaquill griffin as one of only five players since 2016 to record double-digit tackles in their NFL debut.

Brandon Jones really stuck out to me. I realize I’m not breaking ground with that take, but he was ready from the get go. I’m very excited about him going forward.

Christian Wilkins was a beast the entire day. The second year linemen did more than just do splits. He was a force. Here’s what he did according to Phinsider’s own Justin Hier;

Christian Wilkins was the highest graded #Dolphins defender in Week 1, per @PFF_Dolphins.

Wilkins finished the game with six total tackles (two for loss), two PDs, one sack, one QB hit, and plenty of pressure generated up the middle. Wilkins is set for a major jump in year two.

One thing that needs to be tattooed on everyone’s brain, and it leads to why I don’t think that the Dolphins should fold their tent, is that if this Dolphin’s team ends up panning out this year, that’ll, probably, look different than how it looks now. It happens every year with teams. Teams are built a certain way, but because of injury or an emergence of an unsuspecting player, the coaching staff adjusts and creates strategies to fit their personnel. Would it shock anyone if Breida gets traded or that the Dolphins trade for another receiver due to Parker’s lifelong hamstring issue? When Tua gets put in the lineup, what is that going to look like? You don’t know, and I don’t know. The offense might be doing things like much more RPOs, and it might click. The point is, it’s been one game, and there’s no reason, again unless you’re a whiny doofus, to give up on this team right now. Even if Buffalo smacks us around on Sunday, which might happen;

The Dolphins can come out and defeat the Bills. They can enter a short week with the Jaguars coming to Hard Rock Stadium with a 1-1 record with an excellent chance to go 2-1. Is that likely, at the moment? No, it isn’t. Buffalo is a much more physical 2020 version of the Patriots. Their defensive line will test the young offensive line of the Dolphins much more than the Patriots. But, Miami can still get better this week, clean some things up, and develop a game plan on both sides of the ball that’ll be a winning formula.

The point is, now is not the time give up hope and say, “well that’s the some old Dolphins that I’ve been watching for 20+ years.” If things continue for another few weeks, go right ahead and say that. But not after week one. Remember….