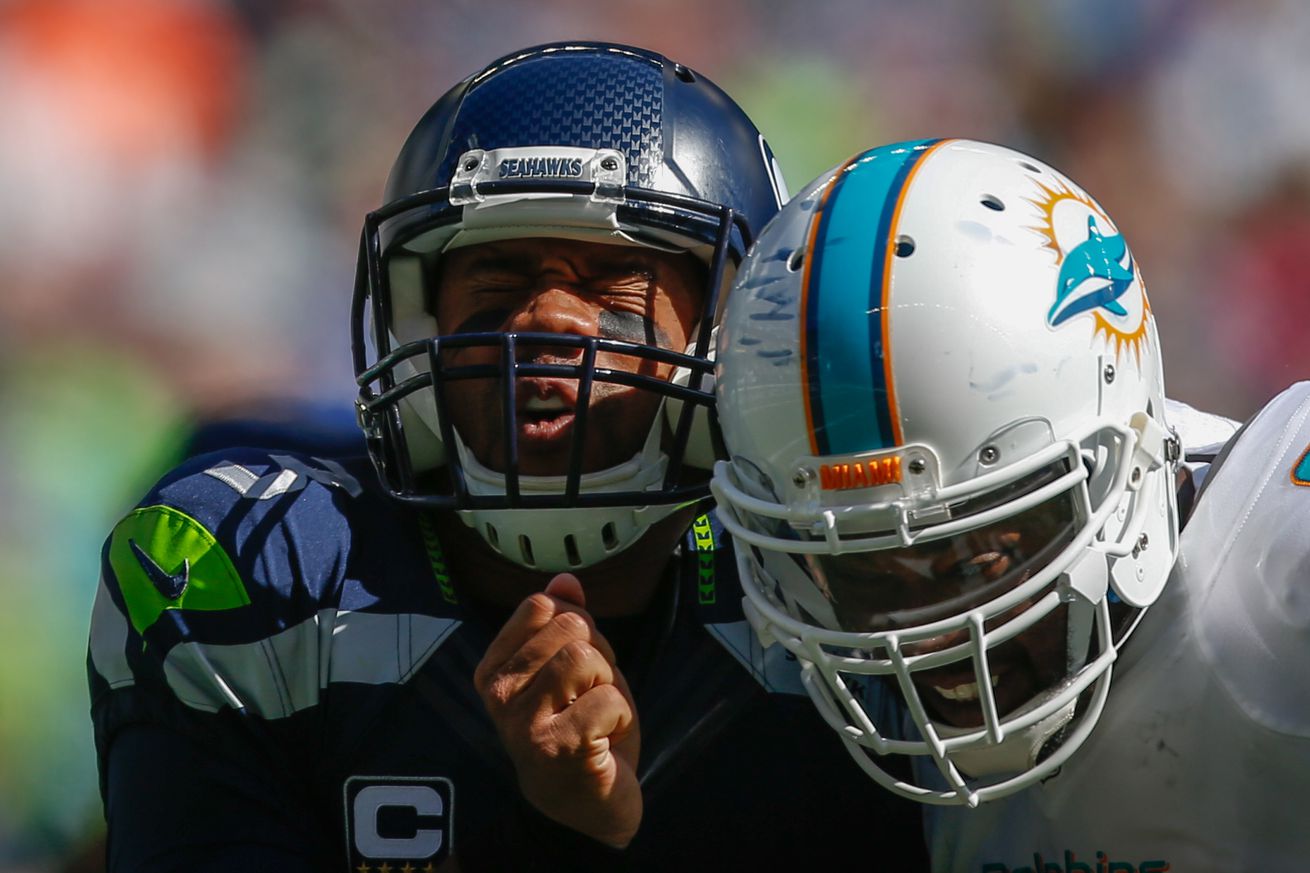 Our Miami Dolphins are coming off their first win of the season over the Jacksonville Jaguars. This week the task gets much, much more difficult as the Seattle Seahawks come to town. While many Phins fans have learned to love the eccentric current starter of the team, Ryan Fitzpatrick with his magnificent beard and his ability to sometimes make something out of nothing while also not being afraid to give up his body for the team he’s no match for Russell Wilson. Fitz is one of the most popular players in the NFL among other players but Wilson is just flat out one of the best in the game.

Fitzpatrick has had one horrible game one okay game and one good game thus far. Fitz’s stats through the first three games sit at a total of 679 yards, for 226.3 yards per game to go along with 4 touchdowns versus 3 interceptions (all from the first game against the New England Patriots) giving him a decent 91.4 QB rating. Fitz has also rushed the ball 15 times for 68 yard and one additional touchdown. On the flipside is Wilson who through the same number of games has accounted for 925 yards, for 308.3 yards per game and an astounding 14 touchdowns to only one interception giving him a stellar 139 QB rating. Wilson, like Fitz has also run with the ball quite a bit at a rate of 14 rushes for 90 yards but no touchdowns.

Seattle’s weakness is clearly not at quarterback or on offense with a team that has scored 111 points in three games, equaling or surpassing at least 35 points in each game. By comparison Miami has scored 70 points in their first three contest, only passing the 30 point mark once, last week, against the Jags with 31. Seattle though does have a weakness and it’s at defense where they are dead last in the NFL. While Miami is not doing much better I prefer being ranked 25th in total yards surrendered than 32nd in the NFL.

If Miami is going to have any chance against the Seahawks this afternoon it would seem as if they will need to do so though the air. The Seahawks are currently second in the NFL against the rush giving up a meager 66.67 yards per game. By comparison the Dolphins, ranked 25th, are surrendering 133.67 yards per game on the ground. Against the passing game the Seahawks sit dead last at 32nd, surrendering a whopping 430.67 yards per game. The Seahawks offense actually falls short of this number having been able to gain an average of 426.7 yards per contest. The difference between wins and losses seems to be Wilson standing on his head when his team has needed him but every player has to have an off week and or come back down to earth at some point.

Please use this game thread to follow and discuss todays game between your Miami Dolphins and the Seattle Seahawks. As always all site rules apply to the live game threads as they do on any other post on the site. Also please remember that SBNation is very strict on the sharing, requesting or even discussion of illegal game streams anywhere on any of their sites. Please don’t get yourself warned or banned from the platform over this.