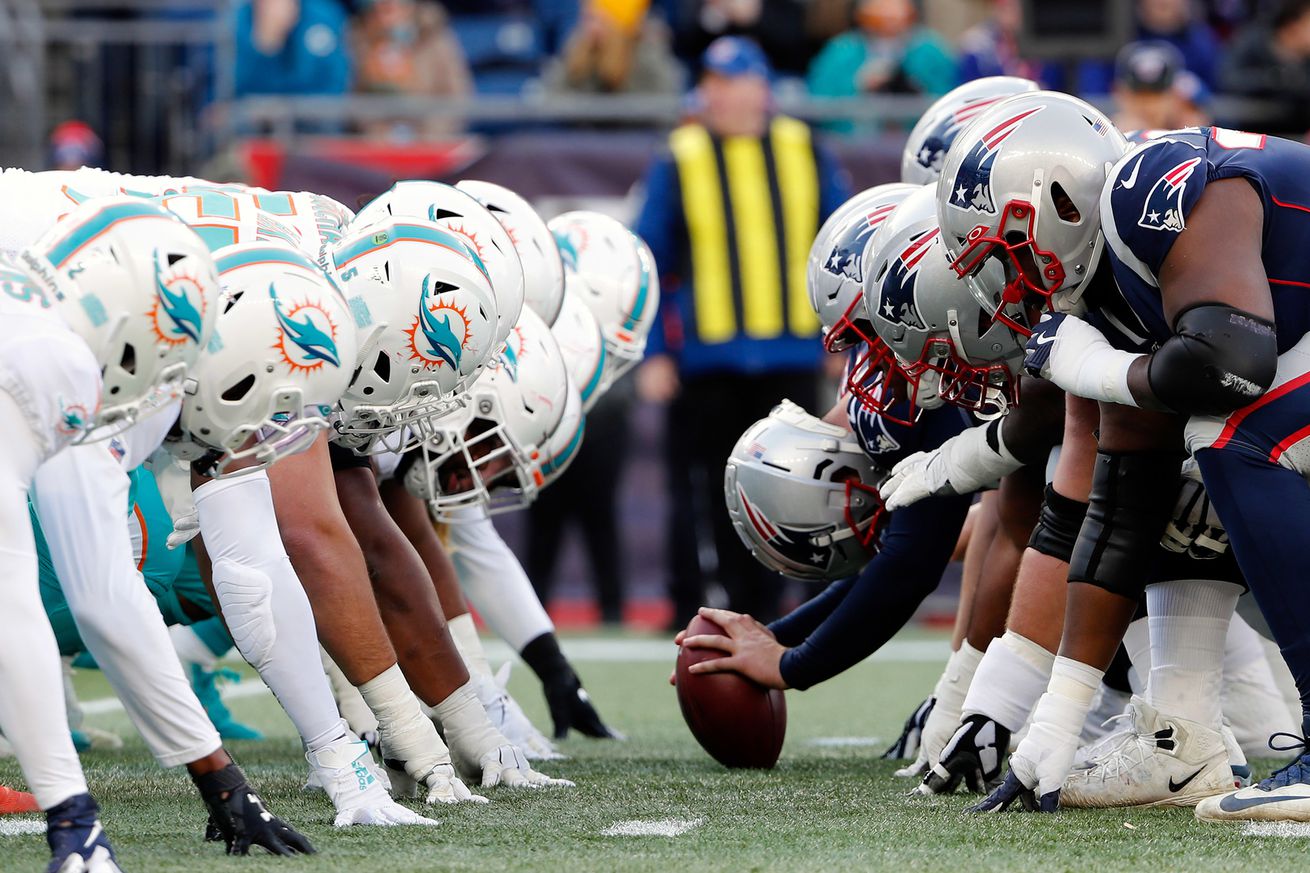 Well everyone, we made it. I know it may not feel like we did, but we made it to week one of the 2020 NFL season. I know seven months ago, it didn’t look like we’d ever get to this point. But, we did what we could, did what we had to, paid our dues, and we’re here. Give yourself a round of applause.

But we cannot let this joyous occasion distract us from the task at hand. That task is, of course, traveling to Foxboro and taking on the team that has a vice grip over the AFC East for the past two decades, the New England Patriots. The Patriots have been a nearly impenetrable force dominating the league. Now Tom Brady is in Tampa Bay and the Patriots are essentially the aliens from Independence Day once Goldblum and Will Smith uploaded the virus. For the first time in 20 years, the division is truly up for grabs, and I will say it is time for the Dolphins to fire at will.

One thing that the Dolphins have going for them is that they are relatively healthy. In fact, this is probably going to be the healthiest they’ll be all year. I wrote about it earlier today, which you can conveniently read all about right here. Here is the Patriots injury report:

Another factor that must be mentioned is that the Patriots had several key players opt out, for Covid reasons, weeks ago. Players such as Patrick Chung and Donta’ Hightower will not be on the field on Sunday. Sort of a big deal.

We know Tom Brady will not be there, which is a major for plus for the Dolphins for years to come. But, Jamie Collins and Danny Shelton, along with Miami acquiring Kyle Van Noy, Elandon Roberts, and Ted Karras this offseason, are not in New England anymore. Those are a ton of the best players from last year’s Patriots team that will be on the field Sunday. Plus, the Dolphins are exponentially better from last year’s team. With extreme confidence, Miami got better in the backfield, the defensive line, and the secondary. Last year, Miami beat the Patriots in Foxboro when the Patriots needed to win with a less talented team .

You have to think that Josh McDaniels is not going to waste any time in showing some of the new aspects of his offense being run by Cam Newton rather than Brady. I imagine we will see jet sweeps, run-pass options, and designed quarterback runs. Fine with me. I do not fear Newton. He was once really talented…four or five years ago. He’s not accurate and the New England receiving corps is pedestrian at best and we all know it. Spare me all of Belichick’s coach speak of praising Newton and that he’s the hardest working guy since John Henry. This inexpensive experiment, can go easily go south and I believe it will. Hopefully, it starts derailing on Sunday.

Get ready to hear that classic Cam Newton cadence. You know the one.

Unlike the Chiefs on Thursday and future Dolphins home games, the New England Patriots will have zero fans in attendance. Because of this, Cam’s cadence will probably be heard in Connecticut.

Another thing that’s going to be annoying is hearing, for the millionth time, that Newton is as big as a linebacker. I didn’t make a Dolphins versus Patriots drinking game, but if I did, that would be worth at least three sips.

One thing that I caution everyone in not doing is getting sucked into the Parker versus Gilmore matchup. I know Parker crushed Gilmore, who was named the 2019 Defensive Player of the Year, in Week 17. Make no mistake, however, as Gilmore is an elite corner and knows what all of us have said about that game since January. He’s going to look to blank Parker. I love Parker and I think he can have a big game, but would it surprise me if he had a stat line of 4 catches for 36 yards? The answer is no. Just have some reasonable expectations.

But because it was so awesome watching Parker shred Gilmore, here’s the highlights from their last encounter.

The unit I’m going to be focusing on the most is going to be the offensive line. From left to right the Dolphins have Austin Jackson, Ereck Flowers, Ted Karras, Solomon Kindley and Jesse Davis. Miami will be sporting two rookies, two free agents, and the returning Davis. I think we all understand that if this unit does not perform, it will be very difficult for the Dolphins to make any substantial headway in the AFC. The coaches think this is their best starting five, so I have no reason to doubt them, at this point.

Naturally, because having new toys is cool, I’m fascinated to see how Jordan Howard and Matt Breida look. I think it’s fair to say that Howard will get every opportunity to get the bulk of the carries and I think that’s the right move. But that doesn’t mean that when Breida gets in that he doesn’t look like he’s already in mid-season form. I feel the way the backfield will be decided on who gets more carries is who has the hot hand. It would be great to have them both rolling like a better version of Tiki Barber and Ron Dayne. No reason why they cannot be 2020 version of Thunder and Lightning.

That Dolphin’s secondary is another unit I am interested in seeing. We finally get to see newly acquired Byron Jones and the return of Xavien Howard who might as well be named the best damn secondary money can buy working together. Along with the ascending Nik Needham and rookie first rounder Noah Igbinoghene (I am just going to with Iggy) the Dolphins have a secondary to play in your face coverage and let the defensive line go eat.

Hey, all you geeks out there who were throwing up all over yourselves when you saw Tua on the injury report and thought it was fun to let out all your Tua hate…

Dolphins’ first-round pick Tua Tagovailoa, whose status for this season became in question after fracturing and dislocating his hip last November, was a full participant in practice this week and will be ready and available for Sunday’s opener at New England.

The old adage of being a play away is a true one. Tua is one Ryan Fitzpatrick thumb smacking a helmet away from being put in the game. He knows that and it’s why he will (I hope) be prepared.

Ryan Fitzpatrick and the Chan Gailey offense need to start fast. We cannot see consecutive three and out drives like we have all seen too many times before. I, and I’m pretty sure everyone else, want to see offense with a purpose, establishing an identity for 2020. Run the ball to set up play action and then use the size of the receivers to your advantage. Take it to this depleted Patriots defense early and make Newton have to beat you with his average receivers and you probably win the game.

The Patriots reign of terror over the AFC is on life support. The only reason why they are still being talked about like a contending team is because of Bill Belichick. I think that is fair. I mean, he is the greatest coach of all time. Sorry if that hurts some feelings here. But even he cannot construct a playoff team with this roster. It is a bad roster, for the most part. The Dolphins are the up-and-coming team that has everything place to be the now and in the future to be the stalwart in the division. The Bills still have Josh Allen, who folds under pressure. and the Jets are the old Dolphins with former Miami head coach Adam Gase seemingly running into the same issues he had in his old job. Miami is the team that is being run the best in the division.

Sunday’s game wont’t be a blow-out either way. However, I think the Dolphins are hungrier and will be a bit more amped than the Patriots who are looking to take the year off. Let Newton be himself. Take advantage of the Patriots dearth of talent on defense and let DeVante Parker, Mike Gesicki, and Pretson Williams feast. Maybe even hit them with a trick play from Jakeem Grant or Malcolm Perry.

By the Way- Let us not lose sight that we get to watch football in 24 hours. Enjoy it. Fins Up!